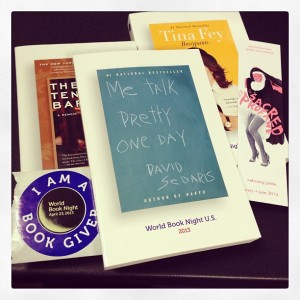 Stay on top of your Twitter feed Tuesday night (April 23) and you might end up with a free book.

West Hollywood will celebrate World Book Night with book giveaways at secret locations around the city from 6:30 p.m. to 8 p.m. The Twitter handle to follow is @artbeaweho for hints and clues, or get them on Facebook at www.facebook.com/artbeatwesthollywood.

In 2012, more than 80,000 volunteers gave away more than 2.5 million books worldwide. World Book Night is a non-profit whose goal is to motivate light and non-readers to pick up a few more books.

Some of the books that will be given away in West Hollywood include:

For more information about World Book Night, please go to www.WorldBookNight.org or call (323) 848-6377.