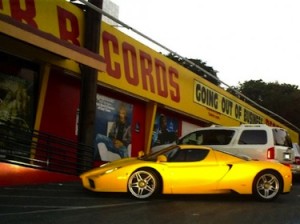 West Hollywood’s Historic Preservation Commission voted unanimously Monday night not to grant historic status to the former Tower Records store on Sunset Boulevard because the building’s once distinctive yellow-and-red facade was repainted white after the store went out of business.

However, hoping the site’s history is recognized, the commission recommended the City Council find a way to commemorate the former store with a sign on the sidewalk or by naming the intersection in front of the building “Tower Records Square.”

“We think it’s the right decision,” said Nicki Carlsen, a lawyer representing the building’s current owner Centrum Partners. “We also will seek to commemorate it either in the public right of way or on the property itself someway. I think Centrum has always been in support of that.”

The decision comes after a heated debate about whether the flagship store of the Sacramento-based Tower Record chain, which was an integral part of the Strip music scene for 36 years, was worthy of being designated a “local cultural resource.” Advocates argued that the unassuming one-story building was the center of the music industry for the entire nation, a place where locals, tourists and celebrities all shopped.

The commission recognized the cultural and social significance of the site, however, that’s only one of two conditions that must be met for designation, according to the city’s code. The second condition is that buildings possess “architectural integrity” and retain “integrity of design, location, materials, setting, workmanship, feelings and association.” In other words, the building must still look like it did when those culturally significant events happened there.

The Tower Records store was widely known for its yellow-and-red facade and its ever-changing signs advertising albums. When the chain declared bankruptcy in 2006, the signs were removed and the facade was repainted white.

“Historically, it is the same exact building,” argued music writer and historian Domenic Priore, who filed the application for the historic status. “Nothing is structurally different about the building except the paint.”

Commissioners agreed the building was still intact, but said they were constrained by the city code.

“We have an ordinance that is geared toward brick and mortar and paint and signs,” said Commissioner Brad Torgan. “What made [Tower Records] distinctive was the ephemeral.”

Priore said he is unsure of whether he will appeal the decision to the City Council, but was pleased the commission gave almost 90 minutes to the discussion.

“I think it was a progressive move towards trying to take a look at the city’s landmarks in a more positive way than simply bricks and mortar,” Priore said.

Commissioner Yawar Charlie said the city needs to come up with a policy for dealing with businesses that played an important part in the city’s history.

“We’re going to be running into this again and again,” said Charlie. “[Tower Records] is just the first.”

Commissioner Gail Ostergren proposed that the Historic Preservation Commission team with the Arts and Cultural Affairs Commission to come up with distinctive signs commemorating businesses, rather than a standard plaque.

If the City Council does opt to commemorate Tower Records with a sign, resident Cathy Blaivas suggested the sign should be done in yellow and red.