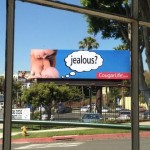 It’s amazing what a tweet can do. A tweet, that is, that comes from Nic Adler, co-owner of the Roxy and a man with 57,000 Twitter followers.

“What idiot put this up outside my office? @westhollywood please do something!!! Shame on you Van Wagner !!” @NicAdler tweeted on Monday. He was referring to a billboard erected just after Mother’s Day in the West Hollywood parking lot on Sunset Boulevard that hosts the Thursday Farmers Market. The billboard features a photo of a woman breastfeeding a child, which would be all too innocent except that the billboard is promoting CougarLife.com, a website for women interested in younger men. A thought balloon shows the baby asking “jealous?”

The City of West Hollywood has very limited control over billboard content. But Van Wagner, owner of the billboard, quickly agreed to remove the offending poster. In a statement to Huffington Post, CougarLife.com, which claims four million members, professed wonder at why anyone would be upset. ““There is no reason for this billboard to be taken down. The Farmers Market is actually the perfect place to showcase this ad,” said Cougar Life spokeswoman Marlo Jordan. “There is nothing more natural than a woman breastfeeding.”

Jordan neglected to mention an earlier and perhaps more controversial billboard on the Strip that showed a blonde woman lounging with a cocktail with the legend, “CougarLife.com … for Mother F*ckers.“

CougarLife’s explanation for the placement of that billboard is that it has more members in the 90069 ZIP zone than in any other area of the United States. That ZIP zone covers the west side of West Hollywood, bounded roughly by Melrose Avenue on the south, Doheny Drive on the west, Sweetzer Avenue on the east and extending on the north into the Hollywood Hills. It’s an area best known for its gay male population. CougarLife’s members, however, are “cougars,” which it defines as women 35 or older interested in a relationship with a man at least five years younger, and those younger men who lust after them.

All that leaves us wondering: If West Hollywood is ever going to officially acknowledge Boystown, should it also consider labeling an area Cougar City?

only 5 years older makes a cougar???…..hmmmmm

i would have never guessed the 90069 zip code to be Cougar Central but what’s more shocking about this story is how prudish and humorless our culture has become.

are we the taliban of taste? this billboard is completely harmless, why in the world would Van Wagner take it down? pressured by a nightclub owner’s tweet of all things? what exactly was the complaint? bad taste? did someone in the city appoint themselves the arbiter of decency and made an unofficial phone call? scary times

How about Cougar’s Corner? It so much more folksy and down home. LOL