After more than 40 years serving West Hollywood, Mirabelle restaurant on Sunset Plaza closed its doors for good this week due to declining performance. The owner, George Germanides, attributes the decline to a failed reboot in May of 2012.

“I felt the pinch towards the end of the economic downturn,” said Germanides in an exclusive interview with WEHOville. “I made drastic changes. I didn’t listen to my feelings and I did not listen to the knowledge that I had. Instead, I listened to other people. And sometimes when you want to make a change and go in a different direction it doesn’t work for you properly.”

“People liked it before the remodel,” Germanides continued. “Everyone came. Then we tried to relate to young people and did it like a club and it didn’t work out. All my customers never came back. They got mad at me because I changed their home.”

After several private meetings with Germanides, Life of Reilly Entertainment (owners of nearby Rock & Reilly’s Irish Pub) have purchased the iconic space. 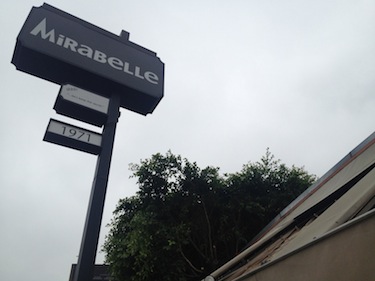 “It’s amazing what George has done to establish this location over 43 years,” said Bryon Schreckengost, director of marketing for L.O.R.E.

Born in Athens, Greece in 1934, the venerable restaurateur is now pushing 80. He and his wife, Lenore, first came to Los Angeles from New York on their honeymoon in 1971 for what was supposed to be no more than a few days. The young couple was so enamored with the Sunset Strip that they decided to stay.

The two newlyweds bought an old hot dog stand called Alfie’s on Sunset Boulevard a few months later, not far from Holloway Drive. In the beginning, the restaurant was no more than an outdoor kitchen with some umbrella tables. Over the years it was remodeled and named Mirabelle after the couple’s favorite restaurant in the Mayfair district of London.

“We were the only outside patio in West Hollywood at the time,” said Germanides. “Of course, this was years before West Hollywood even became a city.”

Germanides weathered decades of fads and fashions and hosted generations of celebrities and parties. The cordial Greek made it a habit to breeze through his restaurant to greet diners. Being welcomed by him became a rite of passage for glitterati and tourists alike.

“Lionel Richie used to come in all the time,” said Germanides. “I used to forget his name. I called him ‘Richard’ and he always had to correct me. ‘It’s Lionel,’ he would insist.

“Madonna came in when she was with Sean Penn. I gave them a secluded booth way in the back that the two liked to call ‘Siberia.’ They appreciated the privacy, and they certainly needed it because they fought a lot. They were surprised at how I approached them, talked to them and tried to make them find peace with themselves.

“Eddie Murphy came in all the time, too. This was when he was shooting ‘Beverly Hills Cop’; I knew his order to where Eddie didn’t have to ask: bagel with cream cheese and lox along with three or four glasses of orange juice. I told him if he called and said ‘Hi’ to my 9-year old son I would give him anything he wanted! And he did!”

Then Germanides recounted the time Michael Jackson came in with a huge entourage. Mirabelle was extremely busy that day. The King of Pop had his eye on a table that a pregnant woman had been waiting 25 minutes for. Jackson reminded Germanides who he was dealing with. But Germanides retorted with, “I don’t care who you are. You can’t have that table.” Jackson stormed out and never came back.

With these memories and so many more, and in the company of his wife of over 40 years, Germanides decided to retire and cash out. Mirabelle’s prime location made finding a buyer easy.

Following the purchase of the old Duke’s coffee shop adjacent to their pub, the acquisition of the Mirabelle property marks the  third investment on the Sunset Strip for Life Of Reilly Entertainment.

“We are very excited about Mirabelle and will be bringing a currently untitled new concept to the historic space,” said Schreckengost.”We should have the concept and name locked down in the coming weeks, and are just honored to have the opportunity to be doing something with such a West Hollywood landmark.”

Hello George, Rocco Fasone and I (John Martinez) and his father Joe Sr, and Joe Jr used to come by for Lunch for “lingunee and clams” with extra garlic and Wine. Sometimes we stayed for Lunch and Dinner. I was thinking to do a re-union with Rocco at your Place. Thank you for the memorable Parties we had there. Enjoy your retirement…

George / Lenore……Cory here…..I hope you are well. Sorry to see the place closed. Came by to see you and the lock was done. Total drag . But for sure great for you. Stay well hope to see you at some point.

So sorry to hear the Mirabelle has closed. My first time there was to meet an old friend from home(Dublin) the late Steve Brennan of Hollywood Reporter fame. On each subsequent trip to LA I would drop my bags at the Le Parc Suite Hotel and walk the short distance to that wonderful establishment. It’s sad to think it is no more.

I went to Mirabelle for over 35 years. One of the best burgers on this side of town. The lobster bisque was so yummy! Their homemade muffins on the weekends were so yummy. We will miss you George and Lenore. I was looking to come by today for a great lunch. I’m sad to see you best. Enjoy your retirement and your life. You’re one of a kind. Lola from Westwood p.s. I was there on Mother’s Day with my Mom one year. Sat near Raquel Welsh. Other times Madonna in the little back room before you remodeled, also saw… Read more »

This was my husband’s & my favorite restaurant. Delicious food, wonderful service, and a kind-hearted and gracious owner. So sad to see Mirabelle go. I hope Life of Reilly does the space justice!

The Rock & Rileys guys can hopefully make this place fun for a younger foodie crowd. Looking forward to having a drink there soon. How do I get an invite to their firends and family night? :LOL

Mirabelle had a lovely patio in the bar area that was the smoking area.
The food was good as was the atmosphere.
I stopped going when the outdoor smoking ban happened.
A lot of restaurants in Weho suffered with the ban.

Sooo many great memories AND amazing friendships happened at Mirabelle-! Especially for those of us who had the pleasure of working there–! Love, Gratitude & Many Blessings to YOU George & Lenore (And your kids & Bobby too-!)
Your Hostess from 1983 to 1990- Deborah

MIRABELLE on Sunset Strip. They used tho have a fabulous GREEK SALAD, but at some dropped it from the menu 🙁 Sad to see them close their doors this week. It’s just down the street from my office, and I’ve eaten there 1/2 dozen tmes over the past decade but if there’s ‘no diners’ there’s no way to pay the bills. 80 yrs old? You and your wife have worked long hard hours over the yrs, achieving the American Dream of a decades long thriving restaurant. God bless you and your wife. Now it’s time that you share and enjoy… Read more »