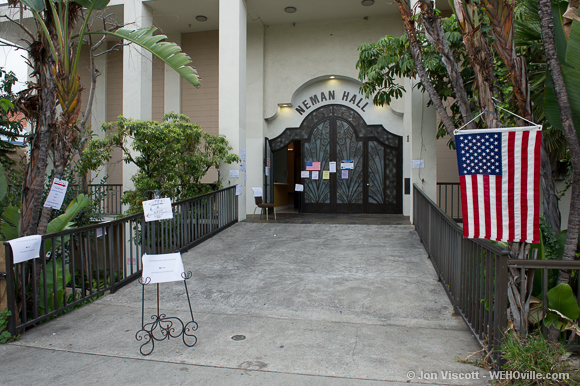 A Superior Court judge has ruled that the West Hollywood City Council violated its own zoning codes as well as environmental codes when it approved construction of a parking deck adjacent to the Iranian American Jewish Center (IAJC) temple on the northwest corner of Crescent Heights Boulevard and Fountain Avenue.

The writ of mandate the judge issued offers a victory for neighbors who have long complained of noise coming at all hours of the night from people using the temple’s banquet facility. Residents contend that Neman Hall, the 400-person banquet hall, is effectively a commercial nightclub. IAJC, however, has claimed that activities at the banquet hall are religious in nature and therefore exempt from city regulation. 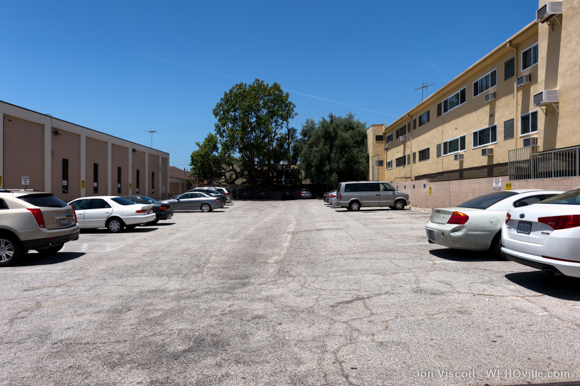 In February 2012, the council voted 3-2 to approve the controversial three-level, 100-space parking deck, which has yet to start construction and would be used primarily for Neman Hall patrons. Councilmembers Abbe Land and John Heilman voted against it.

Judge Richard Fruin ruled the council should have issued a “variance” (an exception to the zoning for the property) to approve the parking deck because the number of spaces and the setbacks (amount of space between the property line and the structure) don’t match the city’s code requirements. In order to issue a variance, many public hearings must be held.

“The ruling of the judge was that it was a backroom deal,” said Santa Monica-based attorney John Murdock who filed the lawsuit against the City Council on behalf of Jerry Ptashkin who owns the apartment building at 1341 Crescent Heights Blvd., immediately north of the IAJC parking lot. “He was much more gentle in his ruling, but that’s basically what he’s saying.”

In 2008, the city’s Planning Commission ruled a 15-foot setback was needed for the parking deck. Fruin noted that the setback requirement was not mentioned in subsequent city documents. Then at its Feb. 6, 2012 meeting, the council approved the parking deck with a five-foot setback, but didn’t offer any explanation as to how it came up with the five feet.

“The record does not present any evidence as to why a variance is not now required,” reads Fruin’s ruling, “thus the city can hardly claim ‘substantial evidence’ supports its present findings.”

“If they’re going to give them a five-foot setback, they have to explain why and do a variance,” said Murdock. “[Judge Fruin] said the city didn’t explain why, so therefore it’s void.”

The city has not yet decided whether to appeal the decision, which was issued on June 3. According to the lawsuit, the council has 180 days, after receiving notice of the writ of mandate (March 5), to meet the terms.

“The city is reviewing the decision and considering its options,” said City Attorney Mike Jenkins in a statement. Gregg Kovacevich, who works in the Jenkins and Hogin law firm, handled the case. 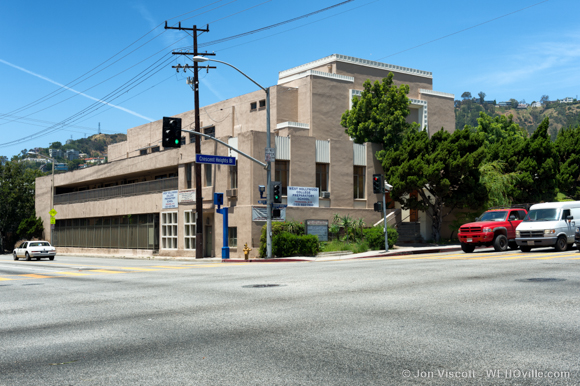 When questioned about the court’s ruling during Thursday night’s Planning Commission meeting, Jenkins said he will bring a resolution to “vacate” the 2012 parking deck approval to the council at its July 15 meeting. Jenkins told the commissioner the city could ultimately decide to issue the variance or amend the zoning codes and to expect the parking deck to come back before them in the future.

Fruin also ruled that the project is not exempt from the California Environmental Quality Act (CEQA), which requires an environment review on issues such as noise, traffic and air quality.

Jenkins told the Planning Commission the city didn’t do a CEQA analysis because it didn’t think one was needed for “an urban area infill project.” However, Murdock said an Environmental Impact Report (EIR) will likely be needed.

While the ruling does not permanently stop the parking deck project, it does significantly delay it. An EIR typically takes nine to 12 months. Hearings before the Planning Commission and the City Council for a variance could also take a year or longer.

Calls to the temple for comment were not returned.

“Neman Hall is a commercial banquet hall/event center, and the parking lot was proposed to support the tons and tons (and I mean tons) of people that partied there every single night of the week with noise continuing past 4 a.m., only to start again at 6 a.m.,” said Marla Miller, a longtime resident who lives in the adjacent 1341 Crescent Heights Blvd. apartment building. “The never-ending banging and clanking due to the insane amount of loading and unloading that was required for these nightly extravaganzas went on for 16 to 20 hours each and every day, setting-up one party while tearing down the previous night’s party.”

The city has long tried to find a way to control the noise problem. The IAJC has frequently cited the Religious Land Use and Institutionalized Persons Act (RLUIPA), which gives religious institutions the ability to avoid zoning restrictions on their property.

Miller contends Neman Hall hosts many events that are not religious in nature. The Neman Hall website indicates the hall can be rented for birthday parties, baby showers and anniversaries as well as weddings, bar/bat mitzvahs and Jewish holiday parties.

At one point, the city proposed an ordinance requiring all religious facilities to obtain a conditional use permit to operate their banquet facilities. Other churches and synagogues in the city cried foul, saying that would punish them when the ordinance was aimed solely at the IAJC.

Because of the number of patrons at Neman Hall, the IAJC needed additional parking and tried for years to get the parking deck approved. Finally, the IAJC agreed to restrict the hours of Neman Hall to midnight on weeknights and 1:30 a.m. on weekends, in exchange for city approval of the parking deck.

Residents opposed to the project came out in force at public hearings about the parking deck. Murdock said those public comments as well as the letters and emails sent to the city about the project were instrumental in swaying the judge’s mind.

“We are not permitted under a writ of mandate to bring in new materials,” said Murdock. “We used everything that was already in the record at City Hall. That’s why they went through all those hearings. All those comments eventually made their way to court. In essence, it’s the evidence provided by the citizens that won this case.”

I just watched mike jenkin’s interpretation of the ruling which was more than amusing……. looks like he intends to waste more of the City’s time and money on this. He is either wearing blinders or is just highly misinformed as he continues to justify the City’s position by calling this an addition to a Temple. The “lot” is not adjoining to the Temple, it is attached and adjoining to the Commercial Banquet Hall that the IAJC built and operates. The main point is that Commercial Banquet Halls are not permitted or allowed in a residential neighborhood, so the City is… Read more »

For your own “amusement” please go online and watch the Planning Commission Mtg. wherein City Attorney Mike Jenkins’ explains of what happened…and then apologizing for the length of his reasoning. He just couldn’t find any layman’s terms to say the City Council/City lost another case because they violated their own codes. @James Mills: Thank you for this piece.

uhhmm… how many hundreds of thousands of dollars should we add to the incompetence tab on this one? of course the legal costs of all these hare brained decisions do not affect our city’s leaders in the least since they’re playing with the house’s money and are never held accountable for their mistakes.

Chloe most certainly is way off – this is indeed a nightclub for many different types of parties, very few of which are connected with the Iranian Jewish faith – come listen to the mariachi bands that played outside in the parking lot for arriving visitors, for example. I have a friend who asked if she could have a prayer said for her late father on a Saturday morning and this so-called “temple” turned her down — told her they were not set up for that. Indeed, they are too busy setting up for parties. They have trashed the area… Read more »

I have to say that since the IAJC has moved their unloading and loading to a zone in front of their property, things have been better. I just wish that they would have stuck to the rest of the conditions that the Business License Commission placed on them before they surrendered their business license so that they would not have to stick to those conditions. All of the problems would have been solved had the IAJC stuck to those fair and reasonable conditions.

I don’t know where this Chole lives, but she is totally off. I was a member of Temple Beth El and the IAJC is not the Temple. I live a block away from this nightmare and am so happy and grateful that the Courts saw through all of the layers of lies made by the IAJC and did the right thing and denied the Commerical Parking Garage that they wanted.

This is a major victory! The City Council approved a parking structure allowing vehicles and moving trucks to be only 5 feet away from people’s bedroom windows just for a banquet hall. It never made any sense, but I guess birthday parties that end at 1:30AMare more of a priority to the City Council than the health and safety of the people that live in the buildings that surround Neman Hall.

I’m really surprised the City of WeHo could ever justify letting the IAJC them build the three level structure. The IAJC definitely does not need more parking for the temple. The lot is never full during the day. Only at night for the huge parties thrown at Neman Hall, the majority of which obviously have no religious affiliation. There are red carpets for anniversaries and birthdays all the time out front (all of which go late, late into the night!), and the catering trucks and partly suppliers are always hired for people’s private events. I certainly hope they don’t try… Read more »

The proposed parking garage would only create more noise (poor design to mitigate noise) and enable the late night parties that have caused the nuisance. So, issuing a variance would make things worst for the neighbors that have suffered for years. The City needs to get their priorities in order and follow the laws and rules to protect the residence of West Hollywood instead of supporting an illegal commercial banquet hall in a residential neighborhood.

I was at the meeting when the IAJC was granted the go ahead on the project. It seems to me that issuing a variance – ifthis is in purview of the city and answers the question at this point would make more sense. I have no idea if the claim about the legitimacy of this Center is kosher – (no rabbi, no religious school, no regular services???)lbut it has been believed to be as such for many years. Sephardic customs are quite specific in the times of the day or night certain rituals and rites may be performed. This has… Read more »

I hope the City doesn’t waste anymore time and money by appealing this. Enough already. Maybe its time to start to think about the residents that actually live in West Hollywood and have endured the major disrupt and change in the area since the IAJC built and began operating a commercial event center.

The City is out of control by calling this “an urban area infill project” to avoid CEQA. The IAJC has been running a major business for years, with no regard for their neighbors. Everyone that I know living within a mile of Neman Hall are so thankful for Judge Fruin’s ruling. A big Thank You to Mr. Ptashkin!