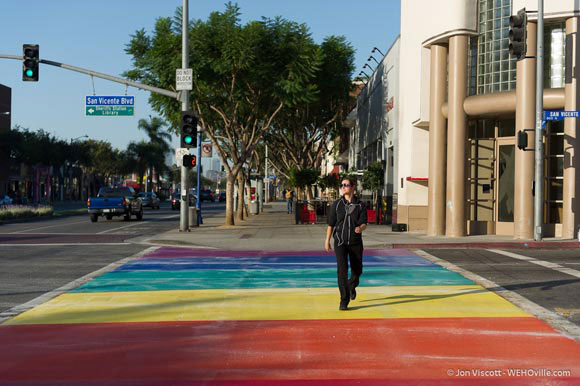 What should the intersection of Santa Monica Boulevard and San Vicente Boulevard be named?

LGBT Square? Equality Square? Boystown Square? Or something else entirely?

That’s what a new task force must decide. The city’s Lesbian and Gay Advisory Board (LGAB) formed a five-member task force during its Thursday night meeting to tackle the issue after resident Larry Block urged the board to recommend a special name for the intersection to the City Council.

The site of many gay rights and AIDS rallies over the years, the Santa Monica-San Vicente intersection is considered the heart of West Hollywood’s gay entertainment district.

Block, who in June successfully lobbied the City Council to put a rainbow flag symbolizing gay rights atop City Hall, will serve on the task force along with LGAB members Robert Gamboa, Sue Sexton, Amy Ruskin and Paul Chavez. The task force will report back to LGAB later this summer.

In the meantime, you can help the task force come up with names. Give us your suggestions in the comments section.

I think the name needs to recognize specifically the gay rights struggle. As the city becomes more gentrified, in 10 years, it’s possible it won’t even be unrecognizable and perhaps not even boystown. That corner was largely ground zero for the movement to overturn Prop 8. It’s where the first protest march spontaneously started after the election (not even SF had one the very next day like L.A. did). I think the name should pay homage to the gay marriage movement in particularly as it pertains to prop 8 and the gay marriage struggle. We need to think up a… Read more »

All caps in OVER not intended, darn smart phone.

I would recommend an all inclusive name, rather than an individual, to represent the diverse community in WeHo. Rainbow or Equality are nice words, but have been way over used by OVER. This is the Creative.City, so we should have a name that’s cutting edge. Now I have to.actually think of some suggestions and come back.

I feel we should not single out any individual …….the name should honor
all members of out community…..
We should never never never consider naming it “boys town”….such an
insulting name on so many levels.

What about Ivy Bottini? She is a national civil rights hero who has also been an active civic leader in West Hollywood. Here’s part of her bio from a “Local Hero” profile at KCET.com: “For more than 50 years, Ivy Bottini has worked tirelessly for the rights of women and the Lesbian, Gay, Bisexual and Transgender (LGBT) community. She is a true trailblazer who has paved the way for generations to come. “Currently, Ms. Bottini is spearheading the creation of an AIDS Memorial in West Hollywood and the Southland’s first LGBT Museum. She is also writing an auto-biography about her… Read more »

c.1970 San Francisco artist Gilbert Baker designed what is believed to be the first modern gay pride flag by combining eight stripes, each a different color with its own symbolism: pink for sex, red for life, orange for healing, yellow for sunlight, green for nature, blue for art, indigo for harmony, and violet for the human spirit. When he wanted to manufacture the flag for sale, he found that hot pink wasn’t as available as the other colors, and so the flag dropped to seven colors. Baker later dropped indigo to maintain an even number, and the flag arrived at… Read more »

Rainbow Square, love it! matches the movement and the crosswalks and speaks volumes to the culture.

Anything but “LGBT Square” or “Boystown Square,” please!

I doubt if this crosswalk requires a designation but if it named – it should be for Harry Hay. I knew Harry and I loved him. He was a brilliant and witty man who established the Mattachine Society and made it possible for gay men to congregate in a safe place, discreetly at a time when both were necessary. He marched in every gay pride parade until his advanced age and he upheld the rights of everyone – even some others found distateful. I would posit he is the Parent of Gay Rights in the City of Los Angeles and… Read more »

Equality Square has a ring to it.

As long as it is not now NOR NEVER WILL BE NAMED for a current city council member!