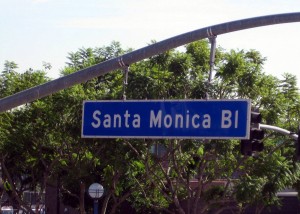 On Monday night, the West Hollywood City Council designated the entire length of Santa Monica Boulevard as an area where “special-needs housing” is allowed without review, including public hearings.

According to a state-mandated amendment to the zoning laws, the city must make it easier to open special-needs housing in certain areas of the city.

The Planning Commission unanimously approved the item in April but suggested the council narrow the area of designation along Santa Monica Boulevard and find other locations in the city.

In December, during a Planning Commission meeting, some residents expressed concern over quality-of-life issues as there is the potential for more homeless shelters to open on Santa Monica Boulevard.

Isa – thank heaven. The Blighted East Side can add “stop and flop” to the many pawn shops. If we were in Boston they would be calling us the twin sister of Route 1 in Saugus.

Dear Snarky and Chloe….I was being tongue in cheek. Of course east of Fairfax would be used for the location.

Why not on Beverly Blvd? What are all those “new” people coming to the pricey new 1,000 units on La Brea and Fountain/SM BLVD/ Willoughby/Romaine/Fuller/Formosa. going to think? Yes, the State required the city have such a thing in the city…but it is sity staff who picked SM Blvd. I think one of the criteria was it had to be near a thoroughfare with public transportation and X-amount of miles or something…apparently Beverly Hills (who is larger and has more people did not go as high as WeHo did. What’s with this City Attorney? Is the City being ill-advised? You… Read more »

Snarky – I too think it will be on the Blighted East Side. BTW – I have my dumpster entrepreneurs on a strict daytime schedule and not until after 9 a.m. – I must yell louder.

I have to disagree with Isa. It is a no brainer. They always stick this kind of stuff on the east side…and then call us blighted.

Well, I wonder why……as I yell out my window at 4am at the homeless going through my apartment building’s trash, which is right under my bedroom window, to come back later in the day.

I’m certain when and if the 1st special housing is built it will be nearer to Robertson than Fairfax.?!?!

And I gotta’wonder on which side of Fairfax these will open to the public? What am I thinking? I don’t gotta wonder. I already know.