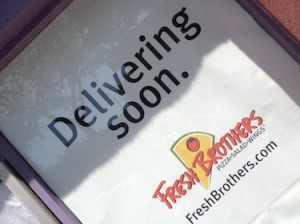 The new store will be located at 8613 Santa Monica Blvd., below the Trader Joe’s grocery store, in the former location of Plaisir Catering Cafe.

“We believe in West Hollywood. We’ve been looking to come to West Hollywood for a while,” explained owner Adam Goldberg. “We looked at several other locations in town, but this was the best one for us.”

The chain offers pizza, salads and buffalo wings and also has vegan and gluten-free options. The full menu is available on its website.

“Fresh is what we’re all about,” said Goldberg. “We use fresh product. Not only do we make our dough fresh daily, we cut all of our own produce. We use the best produce we can find. High quality mozzarella cheese. We bake our wings, not fry them.”

The store will have seating for 25 people inside and another 20 on the patio area. They’ll also have 24 high-definition televisions on the walls playing any number of shows.

“We don’t ask people to leave,” said Goldberg. “We want people hanging out.”

Free, one-hour validated parking will be available at the Trader Joes parking lot. The store will employ about 35 people, many of them delivery drivers.

About 50 percent of the business at each Fresh Brothers location comes from delivery. Goldberg said the West Hollywood store will deliver in a three-mile radius, with Highland Avenue being the eastern border, Wilshire Boulevard being the southern border and the Hollywood Hills being the northern border. For people just outside that zone, the Hollywood or Beverly Hills locations will deliver.

Goldberg started Fresh Brothers in 2008 after a long career in television as a director and cinematographer. He directed documentaries for the Discovery and Travel cable networks and reality shows such as “Date My Mom” and “Exposed” for MTV.

“I had a fantastic career to the point where I was never home. I worked six days a week, 80-90 hours a week,” said Goldberg. “I had to make the decision to never see my kids and lose my wife or start something different. One of the things my wife and I always wanted to do was bring my oldest brother Scott’s pizza from Chicago to California.”

After the West Hollywood location opens, Fresh Brothers will next expand into the San Fernando Valley with stores planned for Encino, then Sherman Oaks and Studio City. After that, they’re looking toward Orange County with Newport Beach, Irvine and Orange in mind.