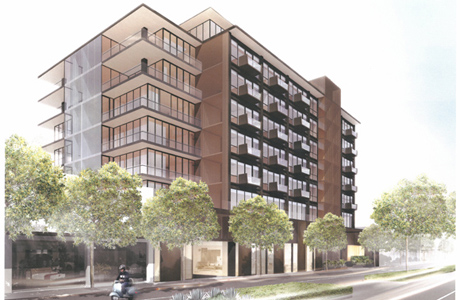 West Hollywood neighbors of the controversial 8899 Beverly Blvd. project, which extends back to their neighborhood along Rosewood Avenue, aired concerns about the impact the proposed development might have on the environment at a meeting Wednesday night.

About 30 people turned out for the state-mandated “scoping” meeting, which allowed for public input on the Environmental Impact Report (EIR) that must be done before the development can move forward. Residents were invited to share any issues they might have regarding the EIR beyond the standard ones that must be examined, such as air quality, geology, noise and traffic.

Townscape Partners, owner of the 51-year-old office building, is proposing an “adaptive re-use” of the 8899 Beverly building by expanding it and then converting it to a residential use with 64 units (eight of which will be affordable units). At the same time, Townscape wants to build underground parking beneath the current surface parking lot behind the building. On top of the underground parking will be 13 townhouses opening onto Rosewood Avenue, a pool/recreation center and a building of four affordable units.

“This is an invasion,” said Rosewood Avenue resident Milli Gervasi. “It’s an invasion of a community that has lived peacefully.”

Gervasi and others said the report should examine quality of life issues, noting that the construction might bring dust, noise and added traffic, possibly affecting the health of residents and their children.

“This is a unique block,” said resident Mary Miller, who lives adjacent to the project. “Our little block has 19 children in 33 homes. We’re all going to be affected.”

Drainage was also a major concern. Some residents, who noted their yards often flood because the ground water table is high in that part of town, wondered how building a 30-foot-deep underground garage might affect them.

“Where is that water going to go?” asked resident Seth Meier.

Resident Robert Goodman wondered, as did other residents, what affect 200 new residents would have on plumbing, including a cracked sewer line on Rosewood Avenue.

“We have to ‘snake’ every six months already,” said Goodman.

Residents said the report should examine removing asbestos and other hazardous materials from the 10-story-tall 8899 Beverly building.

Curtis Zacuto of EcoTierra Consulting, the firm hired to do the EIR, said the purpose of the document was not to weigh the pros and cons of the proposed development, rather to write an unbiased report evaluating how the development will affect the surrounding area.

“The EIR is a snapshot of what’s there today,” said Zacuto, who will serve as the EIR project manager. “We’ll then study how the project changes the area.”

Residents have until Aug. 7 to submit suggestions. A draft of the EIR will be completed in the fall. Residents then will have 45 days to make comments before the final EIR is written.

City planner David DeGrazia said the cost of the EIR is $250,000, an expense that must be paid by Townscape Partners as part of its application for the project.

Here we go again! This building is dated and ugly and soooo overtime for a redux. All of the people that have written a reply who are totally against it have not one time SCREAMED that we need transit. Get our of your cars and use the bus/trains/feet for a change like they do in a first class big city. Los Angeles is built-out folks and there is not where else to go but up and that’s a FACT. A world-class city has quality transit running everywhere and we should have it without a doubt. Call the mayors office and… Read more »

There has not been a spike of crime at WeHo Gateway. The area has gotten progressively safer after the Homless Center for GLBT youth moved further east and the city’s bike cops installed detex along SMB.

@Snarkygal – you are calling people nimbys without considering the zoning of the area. The 8899 Beverly building is located in a CC1 zone. The building is already 3+ times bigger than anything on that block (grandfathered in) and if it were demolished and rebuilt, it could only be 35 ft. tall with a 1.5:1 FAR based on CC1 zoning. So why should the City allow the developers to add more height and density to a building that is already non-conforming in the current zoning – zoning which was just approved by City Council with it’s new General Plan? If… Read more »

I am a property owner who is sick of the east side being neglected. What I hope to benefit from the many new changes: -New neighbors who aren’t living in rent controlled apartments for the last 35 years. -New Restaurants where the food isn’t served in a bag -New upscale neighborhood serving businesses -Less prostitution/homeless loitering/drug users squatting in empty buildings. -Less crime (1000 new residents = 1000 more people demanding attention from the sheriff -INCREASED PROPERTY VALUE (I realize that in Chloe and Snarky world, that makes me bad, but it’s property owners who take the biggest risk and… Read more »

I lived in pre-WeHo West Hollywood when the Beverly Center was being built. I lived about 1 block away. I think I got used to the pile drivers. I know my leg didn’t though -it kept time with the thunks for many months. I referred to it as Robert Klein Syndrome. Some of you will get it.

BTW – Thanks Snarkygal. Wonder who Steve is anyway. I would dearly love to see his numbers. And I would definitely LOVE to be queen.

As far as the building on Beverly this article is about….I think the neighbors are being typical NIBMYs. A neighborhood cannot remain unchanged forever, as the east side has shown, whether we like it or not. It is not like they will be subject to a view of parking lots…we are talking about townhouses and an improved building. The actual building is on a major street. They only see the back end – townhouses, rec center and the improved building…not exactly a bad view. Give me a break. Construction only lasts a certain time, then it is over.

Chloe doesn’t hate the east side, she loves it and hates what is happening to it. I am with her. All the developments being dumped on us will only create gridlock worse than we already have it. And Steve, I sincerely doubt your statement regarding the majority of east siders. I am a long time (35 years) east sider and I hate what is going on. Why aren’t these type of projects getting dumped on the west side, mid-city? No, all on the east side, which our City Council thinks is a dump. It is not a dump. It used… Read more »

@Steve, you state: ” While you may not feel comfortable accepting new residents into West Hollywood, I’ll tell you that the overwhelming majority of east-siders strongly disagree with you.” Upon what are you basing that statement? Have you polled the “overwhelming majority of the east-siders? Many residents on the eastside DO NOT even know what’s going on. I have a feeling most of them do not know that over 1,000 units are going into a 5 sq. block area of tiny little WeHo on the east side. I assume you are an eastsider, Steve. Can we all assume you are… Read more »

Chloe, If you were Queen, I’d like to hear what your blueprint for the east side would be.
Specifically, what would you like to see at: 1) Movietown Plaza, 2) Faith Plating, 3) Carl’s Jr., 4) Weho Gateway site.

I’m serious. You endlessly talk about what you DON’T like, but I’ve never heard you offer constructive ideas? How can you possibly think that the neighborhood was better 25 years ago then it is now?

BTW – attempting to make and regard sound fiscal investments are good business. I am positing an opinion.

Hate the East Side of WeHo? On the contrary – I moved here 25 years agoand chose it intentionally. I like it here. I am simply dismayed by the abundance of large buildings and rental units and I do wonder who will occupythem. Steve, since you do not reveal your last name, I take your comment with that in mind. David, I appreciate your info and will bemindful of it – but both of you – I still stand with my own comments. Only time will tell which of us is the more accurate – hopefully not me. Unrented buildings… Read more »