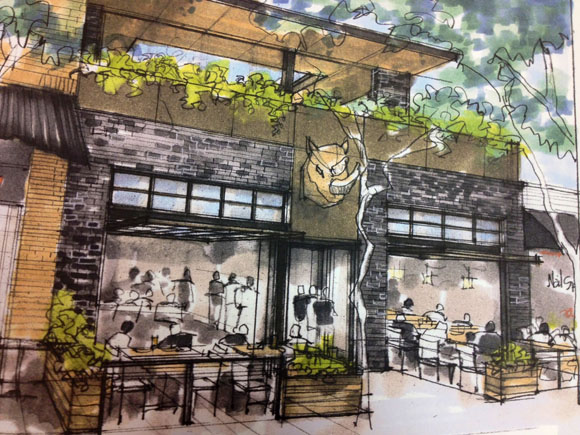 Adventurous eaters will be able to sink their teeth into fresh game such as duck, venison and ostrich at The Horn, a restaurant, bar and lounge opening later this year. The eatery will be located at 8933 Santa Monica Blvd. just east of Robertson, at the former Marvin’s Pharmacy space.

Co-owners Daniel Cammarata and Adam Klesh, both former New Yorkers, say their goal is to “bring a little bit of New York to WeHo” with a New York-style steakhouse.

They see the menu as “Mom’s comfort food” with an outside-the-box twist: international fresh game. They tout fresh game such as venison as healthier than beef and pork — although they’ll also serve more traditional dishes for guests with less exotic tastes. The game menu will rotate based on what is available fresh, they said, and they won’t buy from large-scale farming operations.

In addition to its lunch and dinner offerings, The Horn will have a late-night menu with food served until 2 a.m. Guests will sip after-dinner cocktails on a a rooftop lounge, which will also be used for “large and hearty weekend brunches” with fare such as French toast and mimosas.

Klesh will be the general manager of The Horn, which will open its doors this fall. The restaurants takes its name from Klesh’s collection of rhino-themed objects from 37 countries; some of his collection will be on display.

Klesh and Cammarata are longtime friends who decided to go into business together. They formed DADAM Design, which is the parent company of The Horn.

The Horn is their first venture in which the pair have full ownership, rather than being outside contractors. Although they describe The Horn as “very much pop and pop,” they have dreams of growing their business in the coming years to include additional restaurants as well as a boutique hotel.

The addition of The Horn Steakhouse to Boystown adds yet another nightlife option to the area. Cooley’s, a restaurant and bar from Abbey President David Cooley, is currently under construction across the street, and also in the works is Lisa Vanderpump’s second WeHo restaurant and lounge concept on the corner of Santa Monica and Robertson boulevards, to be named P.U.M.P.

Along with Mother Lode bar, which is in between P.U.M.P. and Cooley’s bar, a massive cluster of nightlife venues will dominate the southeast corner of Robertson and Santa Monica boulevards.

Considering the Concorde stopped flying 20 years ago, it won’t be that fresh….lol

I doubt many will be offended by the name or themed objects, which no one has seen yet. But rather the quality of the food, relative pricing and the ambiance will draw people in. Dinner out in WeHo can get pricey! So I’ll probably be one to enjoy the brunch on a Sunday. Or lunch. But also the Palm from what I understand is moving to Beverly Hills, so a great steakhouse with the twist of the fresh game sounds like it could be a great new venture in the area. Will be nice to keep seeing the new places… Read more »

Rhino animal symbolism reminds us to appreciate the expansive bounty we have around us. When the rhino comes to us in our daily lives it is time for us to stop and give thanks to the infinite wonders occurring in every millimeter and minute of our lives. Symbolically, the horn is priceless. Shamans, and ancient practitioners of animal symbolism and spirit communication have recognized the symbolism of the rhino horn as special and unique. Our physical human eyes see something special and magical in the rhino horn – we can initiate that powerful strength, protection, and success internally. Indeed, mystics… Read more »

Guys… Seriously?!? “Rhino themed objects,” as in statues, masks, etc. And as for flying game in on the Concorde, Matt Baume… This is California: there are Ostrich farms all over the state, and probably any other weird game you can think of short of dodo. Instead of unnecessarily working ourselves up, let’s be happy that new spots are opening in our neighborhood. And even if it’s not your thing, you can take pleasure in the fact that it has nothing to do with SBE. 🙂

Aside from the theme which sounds more like Houston than Weho, I wonder if it will be another high-priced restaurant. Judging by the popularity of Tender Greens and Fresher Corn Grill we need more average-priced places. Many of us eat out almost every day so having more affordable places would be a welcome addition.

Love that 3 new restaurants (slash bars) will be opening on the west end of Boystown. We need it!

You all are condemning the place before it even opens. Give it a chance to open. Check it out and then form an opinion.

I’d be very surprised to see it open by the fall. The 2nd floor/rooftop dining is a great idea and a nice touch, if they can pull it off. But that will take a significant amount of construction and permits to update the old building and all a 2nd floor. They also need to get the permits and liquor license. That takes time. As to the name and theme. I don’t know how it will play in West Hollywood/Boystown. I’m not sure I need to be reminded of killing a rhino and/or eating it, considering it’s an endangered species. Local… Read more »

Is anything at this place local, or sustainably farmed? Because it kind of sounds like they’re talking about a restaurant that specializes in meat from far away, which can’t be fresh unless they’re flying it in on the Concorde. Also I really hope the “rhino-themed objects” are, like, wooden sculptures rather than endangered animal parts from poachers. Honestly this description makes the place sound like a villain’s lair. Or maybe I’m just misunderstanding! Prove me wrong, Horn!

oh great, The Horn – “The restaurants takes its name from Klesh’s collection of rhino-themed objects from 37 countries; some of his collection will be on display..” Apparently the general manager has no problem supporting the slaughter of rhinoss for their horns, making them nearly extinct. That’s lovely. Let’s make sure to NEVER eat here.