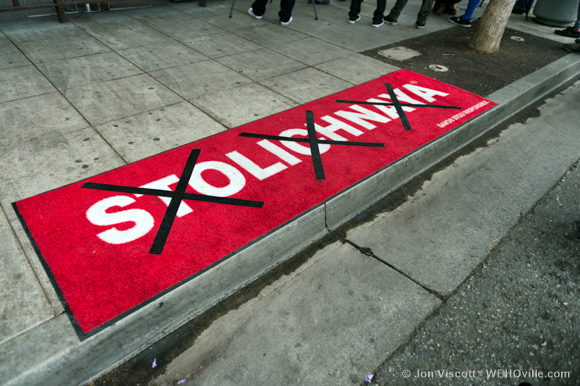 Councilmember Jeffrey Prang, in a call to WEHOville from Seattle, where he is vacationing with family, said the protestors have chosen the wrong target in their effort to pressure the Russian government over anti-gay laws recently passed in that country.

“I recognize that boycotts are often a blunt instrument and have impacts that are not intended,” Prang said. “I think in this case, the evidence seems much more convincing that Stoli was the wrong target. It is not a Russian company. It manufactures its product in Latvia and Poland. It’s headquartered in Luxembourg. I think the most you can say is the closest connection to Russia is its name.”

“Emotions are high right now. What the Russians are doing is pretty egregious and I think people reacted quickly with their frustration, with their anger. I think that’s what we saw with this [boycott],” Prang said. “We’ve had over a week now. We’ve had more time to collect more information, to do more research. In that context, we should pause and make a more informed and thoughtful decision.”

“I’m certain that [Russian Prime Minister] Vladimir Putin is not sitting back waiting for a vodka company from Latvia to call and offer their opinion on Russian policy toward LGBT people,” said Prang.

The “Dump Stoli” campaign was orchestrated nationally by gay activist and writer Dan Savage of Seattle. Savage argued that Stolichnaya vodka is owned by SPI Group, which has offices in Russia, is controlled by a Russian national and grows the grain from which the vodka is made there.

But Prang pointed out that Stoli has been one of the earliest and more forceful supporters of LGBT rights, with gay-friendly policies for employees and public support for LGBT groups.

“It just seems inequitable to ask a corporation like Stoli to do everything that they can in support of LGBT rights and then they do it, but they still get singled out for punitive treatment even though they’ve done everything we could have ever asked them to,” Prang said.

Prang said the Stoli boycott campaign, which also has the support of West Hollywood Councilmember John D’Amico, could lead to other worldwide corporations reconsidering their support for LGBT groups. D’Amico, council member John Heilman  and Mayor Abbe Land did not respond to WEHOville’s request for comments on the Thursday demonstration.

“It essentially says, ‘You could be our scapegoat if it’s convenient despite all of your good acts,’” Prang said of the boycott.

Prang, who like council members Duran, D’Amico and Heilman is gay, noted that he’s not specifically endorsing Stoli. “I’m not an advocate of Stolichnaya. I don’t care one way or another about vodka companies,” Prang said. “I do care about promulgating policies that are as fair as possible. I don’t believe this boycott meets that standard.”

I wonder what Prangs feeling is/was on the Coors boycott.

Hey Tom C, maybe he is just smart enough to know that the Stoli ban is a waste of time and product. He is gay, you know.

Stoli did not “support LGBT rights” as the councilmember claims, instead they decided to market their brand to the gay community. That is a huge distinction, and if he can’t tell the difference, he shouldn’t be on the city council.

I heard an interview with the president of the company (SPI Group) that owns the Stolichnaya brand of vodka. There is a legal dispute with the Russian government over the ownership of the brand. In Russia, Stoli is owned by the Russian government. Outside Russia, it’s owned by this (ex) Russian guy, Yuri Scheffler, who is apparently not a friend of Putin. He lives in London and SPI Group is headquartered in the convenient tax-dodge country of Luxembourg. While the vodka is blended & bottled in Latvia, the raw (pure) alcohol still comes from Russia. The president said they are… Read more »