When Los Angeles author Robert Landau first published his book about classic rock ‘n’ roll billboards of the Sunset Strip, he made his readers an offer: pass along any info on the whereabouts of Paul McCartney’s head and you’ll get a free signed copy of his book.

As the story goes, a billboard featuring the Beatles walking across Abbey Road was constructed on the Strip in 1969. Shortly after its construction, some prankster climbed atop the structure and cut Paul’s head off.

More than four decades later, that prankster, now in his 60s, contacted Landau. “He took it when he was 16, and it was still hanging in his living room,” joked Landau, who traveled to the man’s home in the San Fernando Valley to pose with Paul.

For many, Landau’s book has stirred up memories of a celebrated time along the Strip, when 20 to 30 music billboards presented a one-and-a-half mile art gallery for LA’s car culture.

When Landau was 16, he remembers walking down the road from his home, a block above Tower Records. “And there were the Beatles,” he said. “Sixteen-feet tall, walking across Abbey Road.”

Landau, then a budding photographer, became fascinated with the hand-painted works of art towering above him. So he started photographing them.

“They were up one month, down the other; so temporary, so ethereal. Very few people saw them,” he said.

For a two-decade period, between 1967 and the early 80s — “while the recording universe revolved around LA” — record companies poured money into larger-than-life music ads along the Strip.

“It was a sign you had made it in the record biz,” said Landau. “Being on a billboard was like being on the cover of ‘Rolling Stone.'”

Today, billboards are much different. For one thing, they are digitally printed. During the 60s and 70s, they were hand-made and painted, giving them a unique, personal quality.

In Landau’s book, he tracks down the “unsung heroes” of those billboards, the graphic artists, art directors and designers, like art director Roland Young, who worked for Capitol Records, the company that released the Beatles albums in America. It was Young who went out to examine the Beatles billboard after Paul’s head was removed.

“He said, ‘Let’s just leave it like that, it’ll get more attention’,” Landau said.

The 80s brought the rise of the MTV generation. With it, record money suddenly went to music videos. Rock ‘n’ billboards were no longer the preferred way to announce a new record.

Today, a plethora of billboards still stretch across the Strip, many of them fashion related.

Recently, however, French electronic duo Daft Punk told its record company it wanted a Strip billboard just like the ones in Landau’s book. The result was something straight from the 70s; a striking billboard with only the image of a Daft Punk helmet and a black background. The Columbia Records logo was the only information shown.

For a fleeting moment, the age of rock ‘n’ roll billboards returned.

“West Hollywood has been tied to a lot of things, but it’s had a really special place in the record business,” said Landau. “It should be really proud of it.”

Below, check out some of the billboards from Landau’s book, and his three favorites. 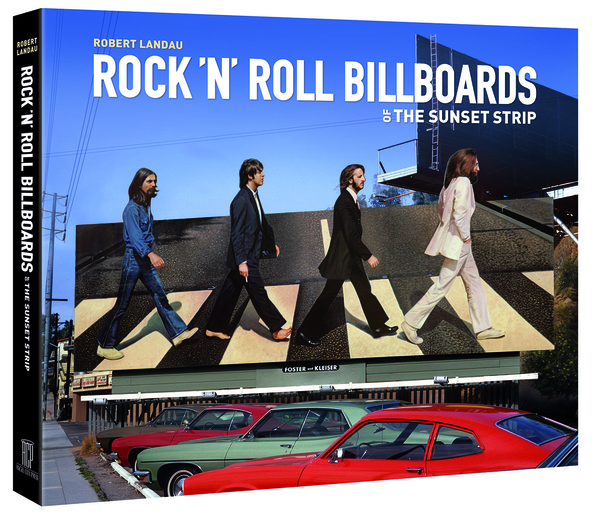 Landau’s favorite billboard, which featured each of the Beatles walking across the famous Abbey Road in London, was constructed in 1969. Like many billboards of the time, the Beatles billboard did not feature any copy. “It didn’t have to say anything,” said Landau. “There was no hard sale to it.” 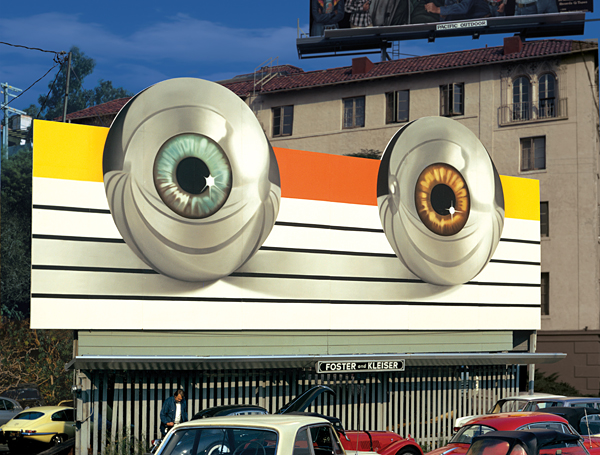 Lou Adler was one of a handful of independent record producers who really accelerated the art of Sunset Strip billboards throughout the 70s. This board is for an orchestral version of the Who’s rock opera Tommy, produced by Adler, that tells the story of a blind pinball wizard. Adler commissioned graphic artist Tom Wilkes to create this amazing image of  chrome pinballs with eyes that glared down from the Strip for several weeks creating quite a buzz until the title of the project was finally added to the design. 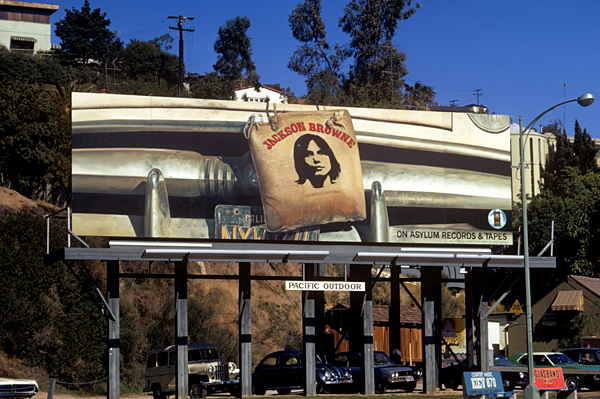 The billboard for Jackson Browne’s 1972 debut album was designed by Gary Burden and features billboard specific artwork that encompasses the album cover design on the front grill of a classic automobile. Burden created images that captured the look and feel of the music coming out of California in the 1970’s for artists like Neil Young, Joni Mitchell and the Eagles to name a few.