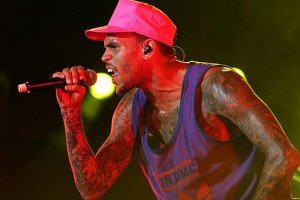 Chris Brown was sued today by a man who alleges he was taunted by the singer and beaten by a member of his entourage.

A representative for Brown could not be immediately reached for comment on Sha’ Keir Duarte’s Los Angeles Superior Court complaint alleging assault, battery, intentional infliction of emotional distress and conspiracy to commit battery.

Duarte says he went to Westlake Recording Studios in West Hollywood on Jan. 27 to assist singer Frank Ocean with a recording session. When they arrived, another car was in a space reserved for Ocean, so they went inside to find out from the staff who had parked in the singer’s spot, according to the plaintiff’s court papers.

Brown later emerged from a recording session and Ocean asked him why the car was in his space, the suit says. Duarte says that after he made the same inquiry, Brown, accompanied by a man identified only as Hood and two others, moved toward him.

Hood then punched Duarte in the face, according to his suit, which also alleges that the 24-year-old Brown yelled the “N” word in encouraging Hood to attack him.

After Duarte fell to the floor, Hood kicked him about 12 times, the suit alleges. Duarte also claims that Brown later yelled, “You just got your (expletive) beat and it’s on camera.”

As he left the studio, Hood told Duarte, “If you want to bust, we can bust,” according to the suit, which says the phrase is street slang for using a firearm.