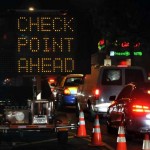 Of the 6,854 vehicles that went through the checkpoint at Santa Monica Boulevard at Robertson Boulevard on Friday, 2,953 drivers were checked, according to Detective Daniel Dail of the sheriff’s Traffic Services Detail.

Six vehicles were stored for one day, Dail said.

@jaxsat 7 people driving under the influence is 7 people TOO MANY. Checkpoints are not cops “have nothing to do”. Ask anyone who has lost a family member to a drunk driver’s deadly driving. 13,000 people per year are killed by drunk drivers…one every 39 minutes. Let’s ask them if it is a waste of time. If we can stop seven murderers out of 6,854 isn’t it worth it?

might be wrong but this is the second time the sheriff has set up shop in front of all the gay bars. I wonder if it’s time for them to move up to sunset in front of sky bar or the seventh veil?

LA County must really be broke to continue to harass taxpayers with checkpoints….Really? 7 people out of 6,854? A colossal waste of taxpayer money. If cops have nothing to do, lay them off and save us all some money.