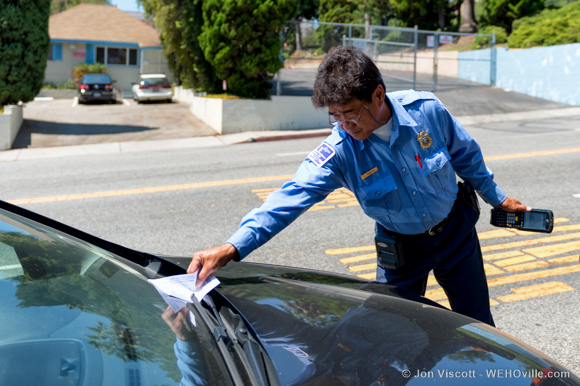 With enforcement of extended parking meter hours due to start on Sept. 3, a number of West Hollywood business owners say they remain confused about how to obtain nighttime parking passes for employees who no longer can depend on parking in metered spaces for late shifts.

As a result of growing confusion, the city changed its policy and will now allow business employees to buy their own nighttime parking passes (previously only business owners could buy permits for their employees). 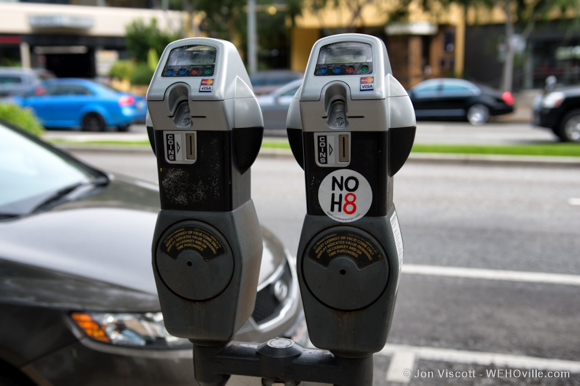 “We’ve added that just to make it more convenient,” said Jackie Rocco, the city’s manager of parking services. “They have to show ID and proof of employment, such as a pay stub. Or the business owners can still purchase the permits for their employees.”

Starting the day after Labor Day, motorists are now required to pay for parking at meters throughout the city for longer hours. Previously, enforcement of parking meters ended at 6 p.m. throughout town. Now, meters will run until midnight, Monday through Saturday, from Doheny Drive to La Cienega Boulevard, until 10 p.m. from La Cienega to Fairfax Avenue and 8 p.m. from Fairfax to La Brea Avenue. The cost remains $1.50 per hour. The move is an effort by the city to create greater turnover of street parking at night and thus make it easier for customers to patronize local businesses.

Now, many employees who work at night use the metered spaces, arriving shortly before 6 p.m. (when meter enforcement ends) and stay all night. But with the extended hours, employees will either have to feed the meters throughout the night or park elsewhere.

The city is offering a number of options for nighttime employee parking, but some businesses say the city hasn’t done enough to inform them on how to obtain the employee permits.

Larry Block, owner of the Block Party clothing and gift store at 8853 Santa Monica Blvd. at Larrabee, said the city was supposed to contact the businesses in advance about the permits.

“No one from the city contacted me,” said Block, a vocal opponent of the extended meter hours. “My employees have been asking me about the permits, but I didn’t have the answers because communication has been very poor about this.”

David Cooley, founder of the Abbey nightclub on Robertson Boulevard, also reports the city did not contact him about the permits.

“We don’t know what the city is going to do yet for evening shift employees,” Cooley said during an interview last week. “We need to wait to see what the options are before we can figure out how best to help our staff.” 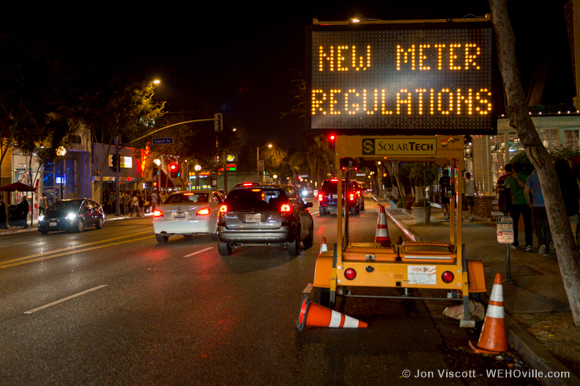 The city has a new 1E employee parking permit, valid from 6 p.m. to 3 a.m., that employees of local businesses can use at  parking meters along San Vicente Boulevard south of Melrose Avenue, along Beverly Boulevard and on some of side streets for $30 a month.

The city also is negotiating a deal to use the Pavilions supermarket rooftop parking lot for nighttime employee parking. A pass for that deck will be $50 per month.

Rocco said she is getting dozens of calls a day about the permits, but so far, those calls have not really turned into sales. As of Monday, the city had sold four nighttime employee permits.

“I think this week is when we’re going to get a good number of [applications for nighttime employee permits],” Rocco said.

That answer doesn’t satisfy Block, who was out of town for the last two weeks of August and wanted to purchase the nighttime permits before leaving. 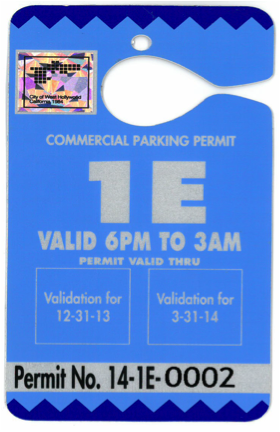 “I called and couldn’t get any answers before I left town on the fourteenth,” Block said. “They’ve got this major plan, which they say will bring more people to the area after 6 p.m., but they don’t tell us what our employees are supposed to do. I’ve gotta know my employees have a place to park.”

Ric Roach, who lives in Hollywood, is one of Block’s employees who works a night shift. Currently, he circles the area multiple times hoping to find a metered space. If not successful, he reluctantly pays $8-$12 a night in a lot.

“It’s really confusing because none of us were informed,” Roach said. “The city hasn’t told us where we can park, just that the meters are being extended to midnight. I can’t leave the store to go feed a meter every two hours. I’m not sure where I’ll be able to park.”

The city says it has put a great deal of effort into informing residents and visitors about the extended hours – all the street signs regarding parking hours have been changed and several large electronic signs on trailers have been stationed at key intersections to notify people of the extended hours. However, those signs didn’t include information about obtaining nighttime employee permits.

Rocco said that since Aug. 1 the city has put over 7,000 courtesy notices on cars advising them about the extended meter hours and giving the City Hall phone number to buy the employee parking passes.  Such placement apparently is sporadic. WEHOville purposely parked at metered spaces after dark a half dozen times in the last two weeks but never received such a notice.

“The Chamber newsletter isn’t the place where you would look for this kind of information,” Block said. “I don’t always read the newsletter. Most of it is about marketing.”

Block wonders why the city didn’t contact the businesses directly, pointing out the city has the contact info for each business via its business license.

“What’s wrong with sending a letter from the city directly to the businesses telling them how to obtain the nighttime permits for employees?” Block asked.

The city faced similar charges of not doing enough to get the word out to businesses when it first proposed the idea of extended meter hours last fall. Several Chamber seminars were held along with an informational meeting for businesses in the library, but none were well attended. 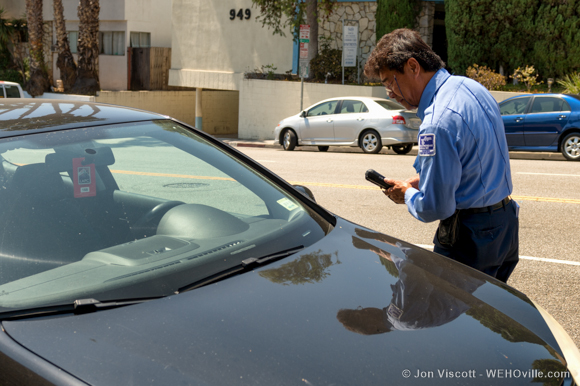 At the April 1 City Council meeting where the extended hours were approved on a 4-1 vote (Councilmember John D’Amico voted against it), some business owners said they weren’t properly informed about the changes and that the extended hours would hurt, not help, their business.

At that council meeting, some people also expressed concern about the safety of employees walking back to their cars on San Vicente or Beverly boulevards with pockets full of tips after bars closed at 2 a.m. At the time, council members suggested employees could be escorted to their cars by private security workers hired to patrol Santa Monica Boulevard on Wednesday to Sunday nights until 4 a.m.. That private security service is to be paid for with the extra $1 million in revenue the extended meter hours are expected to generate,

Despite the council’s urging, the city has made no formal arrangement for the security workers to escort employees. However, Rocco said individual employees, or groups of employees, could ask the workers for an escort.

Rocco also pointed out that employees can use the free Pick-Up Line shuttle running in a loop along Santa Monica Boulevard between Robertson Boulevard and Fairfax Avenue on Fridays and Saturdays from 8 a.m. to 3 a.m.

As for employees purchasing the nighttime permits themselves, to prevent fraud, they will be asked to show proof of employment at a West Hollywood business each time they renew their permit. That will be done to prevent employees who have quit from renewing a nighttime permit and then selling it to someone else.

Rocco also points out that while employees can purchase nighttime parking permits, the city’s policy for daytime employee parking permits has not changed – only business owners can buy them.

John D’Amico was the only one with any sense to vote against this nonsense. If the issue here was about employees taking parking meters all night, the city should have used their surplus to provide an incentive to employees to park elsewhere. Like a parking credit for parking at Pavilion’s, for example. Or maybe extended the meters until 8 PM or 9 PM instead of 6 PM, so less employees can get to them before their shifts. Or some sort of other creative thinking that would prevent them from taking up all the free parking. The shuttle is a great… Read more »

Why did we need to raise the parking fees or meters when the city has a AAA bond rating and doesnt need to gorge its residents and citizens. And Sunday.. thats a crime.. Sunday is free parking in 90% of cities, and Beverly Hills offers 2 hours free parking to help local businesses… This is just a giveway to the parking companies who line the council campaign coffers.

Our city has run amok. The city council is burned out and become completely out of control. The only thing they know is develop, develop, develop. The character of the city is changing, and all for the worse. We need a new development moratorium on the west side so that we can digest the changes taking place.

51% of members of the WeHo Chamber of Commerce do NOT own or operate a business in WeHo? what a curious factoid… what could possibly be their incentive to be in the Chamber?

“employees could be escorted to their cars by private security workers”? what a spectacularly horrible idea! has the city started hiring armed security yet?

why don’t the employees just board the new pick-up shuttle?

Making it more expensive and difficult for individuals to work in WEHO the second problem with the city hall created need to run meters till midnight and sunday. They said it will help businesses???? It seems to me it will help the parking lobby and high salaries at city hall

With Connie and Ted’s employees AND patrons taking up so much of our Havenhurst/Norton parking, my visitors have had to drive around for a half hour and STILL found no spots! That’s the result of the city holding NO hearings about the business before it opened due to something like a 2×4 wall being the only thing left intact and grandfathering it in. Nice job WeHo. The developers ALWAYS get what they want and the city refuses to acknowledge the lack of adequate resident parking. I’m still waiting for some kind of state/fed investigation to throw these bums in jail.