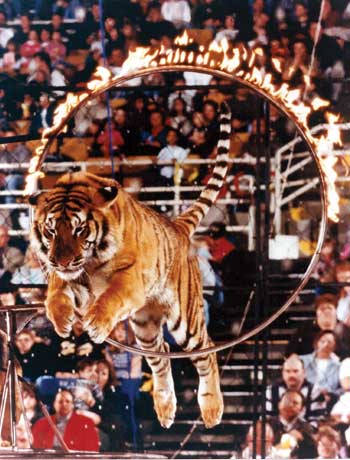 West Hollywood’s City Council unanimously passed its ban on commercial uses for exotic or wild animals during its Monday night meeting, but not without controversy from activists on both sides of the issue.

Sponsored by council members Jeffrey Prang and John Duran, the ordinance prohibits the use of wild animals such as elephants, lions, tigers, bears, monkeys and chimpanzees from any performance acts, including circuses, carnivals, parades or kids’ rides. It is seen by Duran and Prang as an extension of the city’s reputation for being compassionate toward animals.

Sixteen people, evenly divided pro and con, spoke on the matter before the council. Several times, the two sides got into shouting matches with each other, prompting Mayor Abbe Land to bang the gavel to restore order.

Matt Bruce of People for the Ethical Treatment of Animals (PETA) applauded West Hollywood for joining other cities such as Pasadena, Santa Ana and Huntington Beach who have passed such ordinances.

“There’s no excuse for subjecting elephants, tigers and other such animals to use for showmanship,” Bruce said.

Matt Rossell of Animal Defenders International also praised the ordinance saying there is a lot of violence behind the scenes. Animals are beat so they will perform, he said.

“These animals don’t want to perform, they want to do animal things,” Rossell said. “They live in fear.”

Patty Shenker of the Performing Animals Welfare Society (PAWS) applauded the ban and spoke of a video showing employees of an elephant rental company, Have Trunk Will Travel, beating elephants into submission with an elephant bullhook.

Paul O’Sullivan, a spokesperson for Have Trunk Will Travel, called the ordinance “silly” and said the aforementioned video was propaganda that was highly edited.

Kari Johnson, the owner of Have Trunk Will Travel, said she was disappointed by the ordinance.

“I love that you love animals, but this is so not fair,” Johnson said. “What they’re telling you about us is not true.”

Prang said even though the circus does not come to West Hollywood, he is happy to do what he can to help pass exotic animal bans city by city until it reaches the state level.

Councilmember John D’Amico praised the ban and reminded the audience that the city’s fur ban, which he sponsored, goes into effect on Sept. 21.

I went to a circus ONCE when i was a child and i could see the suffering in those animals eyes. Needless to say, I have never gone back, except to protest & educate people to their plight. How is it that so many people do not see it & will not watch the numerous videos & photos of the beatings, intimidations, being chained and confined endlessly and then ask for proof? I guess Lincoln was silly too, freeing the slaves.

West Hollywood ..thank you! it is time someone took a stand, took the courage to what is right and just against the glorification of wild animals being forced to be our entertainment …what isn’t fair, is what we do to wild animals…not what we say about these type of acts.
children benefit fro, being taught compassion, gentleness and respect toward living creatures.

Woohoo WeHo!!! Keeping animals from being displayed for people’s entertainment is common sense and doesn’t need to be “studied”! Thanks for speaking for those who can’t speak for themselves!

A picture speaks a thousand words, a video leaves no doubt that HTWT abuses it’s elephants to force them to perform circus tricks on cue. The West Hollywood City Council called this one right, thank you for standing up for abused animals.

When the City Council relied on untruths and innuendo and did not even attempt to study both sides of the issue…how is that the right thing?

Thanks, West Hollywood, for doing the right thing.