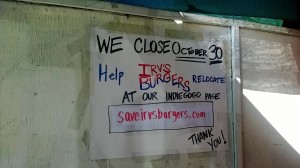 Irv’s Burgers, the 63-year-old West Hollywood hamburger stand sitting at the northeast corner of Santa Monica and Sweetzer, will close on Oct. 30, according to owner Sonia Hong.

As the closing date nears, the Hongs, the Korean-American family who invested their life’s savings in the business, are asking supporters to donate to an Indiegogo fundraising campaign to help relocate the business.

“Moving is expensive. So is setting up a new restaurant,” Hong wrote on the campaign site. “But we want to make the new Irv’s Burgers, wherever it lands next on the map, as inviting and delicious as the location that so many of you have come to love, and we are hoping that you, our Irv’s family, can support our move to a new space.”

The family has not found a new location, according to Hong.

Hong, who works with her brother and mother behind the counter and is known for penning personal notes on most paper plates she serves, has made the stand a neighborhood favorite for more than a decade.

Standard Oil owns both the Irv’s space and a neighboring space, where it is currently constructing a cafe called “Beach Nation.” Both spaces are part of the same property. Due to the new construction, Irv’s must be brought up to current West Hollywood code standards. That means Irv’s roof and patio must be renovated. Standard Oil told the Hongs they would have to pay for the renovations if they wanted to stay, according to Hong.

A 30-day eviction notice was served in person to the Hongs on May 22. Despite the eviction notice, the Hongs say they were led to believe they had “as much time as they needed” to find another location to operate their business, and that Steven Bohbot, vice president at Standard Oil, has been giving them conflicting information.

Hong has also said her landlord has attempted to more than double her rent to $10,000 and put her on a month-to-month lease, which makes the eviction possible.

I like Irv’s. I have eaten there many times over the years, but I didn’t think it was the city’s job to subsidize or take care of any business. A lot of small family owned businesses closed during the Santa Monica Blvd. renovations. I just don’t see why this family has become the victims of West Hollywood. I wish them well, but I imagine they have the money to do the move themselves, or if they don’t perhaps it is time to rethink business.

I went here once, my hamburger came drenched in mustard, it was disgusting, no offense, but Chinese people should not be running hamburger stands.

What makes the Wongs business different from any other? They have been there 63 years and should have shown a profit that would have allowed them to transition their hamburger stand at this point. We’re talking about a ‘hamburger stand’ not a four star restaurant. Nothing last forever,this business is an in old structure. The owners should be prepared to go along with the property owners desire to want to renovate the area and they should not be asking for handouts from the public to do it. They either have a stable business after 63 years or they need to… Read more »

I see this as more about Los Angeles having no memory and less about greed. We are a city of newbies and wannabes and trend-followers. We want the new, but wax nostalgic when yet another business of 60+ years fails. The few old time businesses that have gotten onto the nostalgia (or tour bus) bandwagon, like Philippes, or Titos, or El Coyote, or Pinks (not necessarily representing our best food offerings but still making money), the locals eschew as sell-outs for tourists. But when it comes time to see yet another local mom and pop go under, we wring our… Read more »

I am the person who convinced the Hongs to start the Indiegogo campaign. They did not want to at first. I told them that the people who love them would want to participate in helping them relocate. They’ve been struggling in the face of increased rent for some time now and no, there’s nothing illegal or shady about the landlord wanting more money for his property. But it’s too much for them to handle so out they go. They’ve been nothing but wonderful to the people in this community and it’s incorrect to assign labels like “greedy” to people who… Read more »

(So many Steve’s)
@ Todd: “Most of these high-price watering holes fail after less than a year”.
List please? Your one example is Connie & Ted’s which is getting amazing reviews and is impossible to get into. Seriously, what high-end restaurants have closed in the area in a year?

Does or does not a commercial property owner have the obligation to maintain his rental property? That is the basic question I have and do not know about. If the Hongs did not request repairs and did not report code violations – on whom does that fall? And how did so many faithful customers from City Hall NOT notice the conditions at Irv’s? Regard this as valid question with no motive – I am simply do not know. I grew up in the resort restaurant business on Cape Cod and my grandmother owned the property – the health department came… Read more »

I have an intellectual problem with a business owner asking for handouts as though they were a charity. A sign of a successful business is one that is able to make a profit and sustain itself in good times and bad times. The deterioration of the restaurant did not happen over night. If the Hongs had a legal leg to stand on, I’m sure they would have found an attorney to represent them by now. My dad owned a restaurant years ago with an ogre of a landlord, yet he was able to pay for all of kids’ educations (three… Read more »

I love Irv’s Burgers, but the 65 year old burger stand is a landmark and the Hong family is not. The place is a wreck, unsanitary conditions with rotted formica and plywood food prep surfaces and the shack like structure looks like it is on the verge of collapse. Frankly, I am sick of reading about the Hong family woes and suspect they have probably whined all the way to the bank operating a primarily cash only business for over 10 years. And ever playing the victims, they are now asking for charity from their patrons. They didn’t want to… Read more »

Most of these high-price watering holes fail after less than a year. I haven’t gone to Connie & Ted’s because I’ve been warned away by every friend who paid the high price of attendance for tiny portions – that’s 5 warnings and counting. They spent a ton of money on that place and I don’t give it much time either. Standard Oil made a colossal PR mistake by raising the rent and getting rid of Irv’s. They should have let them stay during the construction of the new place. Then for about 1 month before the new place opens, close… Read more »

Todd, you are right on the money. Bad PR is not always better than no PR.

I thought Standard Oil ceased to exist after it was broken up by the Taft administration in 1911.

Todd – you are cold but on the money. I like that idea. Jon – you are correct. This is some corp. that thinks they chose a seriously great name. Standard Oil the actual entity did not have a very good name when all was said and done. Calling your development company Standard Oil is quite ludicrous.

It might be cheaper to just wait for Beach Nation to fail and then maybe the family will get a good deal to take over the whole property.

Clearly the City and Standard Oil know what their obligations are and there is some sort of detente that released them from repairs to their own rental property. For the many who cherish Irv’s and have spoken out for them it seems appropriate that those same folks would support a relocation of this business and do all they can to make it happen. This should probably include Standard Oil and “Beach Nation” as gesture of good faith and public image.

I have not eaten at Irv’s but I wish them well.