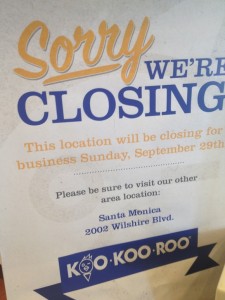 The restaurant, at 8520 Santa Monica Blvd. at Knoll, will make the announcement to customers Friday. The store employs 16 workers, who found out this week they would be losing their jobs.

At one time, the Koo Koo Roo chain, founded in 1988, included more than 30 restaurants with stores throughout Southern California.

In 2003, Koo Koo Roo filed for Chapter 11 bankruptcy and was purchased by Magic Brands, an Austin, Texas company, which closed 10 of the restaurant’s remaining 13 locations as part of a bankruptcy reorganization. In 2010, Luby’s brought Koo Koo Roo after Magic Brands went bankrupt.

With the WeHo closing, the final Koo Koo Roo is in Santa Monica. According to a source close to the company, it will also close soon.

The contents of the WeHo restaurant, including kitchen items, furniture and signs, will be auctioned off starting Friday, 4 p.m. online.

I was sent to Encino for a week to attend a Solidworks class. At lunch on the first day I found Koo Koo Roo right next door. I tried the chicken caesar salad. It was bland, relatively tasteless and overpriced. I wasn’t impressed at all. Later in the week I decided to give them one more try (as the training staff raved about KKR) and went back for a sandwich. Equally overpriced and I was equally unimpressed. Their sides are bland and unseasoned. Their meat is bland and unseasoned. Everything here was bland….and overpriced. I don’t know what all the… Read more »

I found metal one time in the food that was it for me….I loved them up to that…and funny thing is it was the weho one the metal was found in……. after that I stopped all together

Their food was good. But last time I was there, the prices were so high, for the small portions. So I never went back. Not shocked they are closing..

I stopped eating there after getting sick from a chicken bowl. Never went back.

I love KOOKOOROO! I was there the other night with a friend, and noticed how slow it was. This has been the same for a long time now although the food is so fresh and healthy. I remember when they first opened , there were lines to get in the door! so sad!