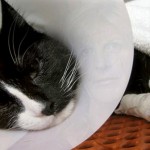 West Hollywood’s reputation as an advocate for animal rights has hit the silver screen with “The Paw Project,” a documentary about veterinarian Jennifer Conrad’s campaign to ban onychectomy (cat declawing). The West Hollywood City Council, whose ban on the sale of fur went into effect recently and is being challenged in court, in 2003 became the first city in America to ban the cat declawing. Councilmember John Duran introduced the measure, which sparked protests by veterinarian groups and led to then Gov. Arnold Schwarznegger’s support of a bill to prohibit such local bans. The California State Veterinary Association took the city to court to fight the ban but lost. “The Paw Project” was screened in West Hollywood in April to celebrate the 10th anniversary of the ban. It official premieres today (Sept. 27) in New York City. The film is being screened across the country. Area screenings are scheduled for Oct. 18-24 at the Pasadena Playhouse, Oct. 19 and 20 at the Laemmle Monic Theatre in Santa Monica, and Oct. 27 at USC. A preview is available on Vimeo.

Would you like to have the tips of your fingers removed? No? Declawing a cat is the same procedure in essence and I believe there is no piece of furniture (the usual reason for this mutilation) that is more important than the health of your cat. If you make this decision and want have this atrocity done – just give the cat to another home that will love him – claws and all. The very word “declawed” makes my stomach churn. Cats need their claws and you probably need your fingertips. Think about it.