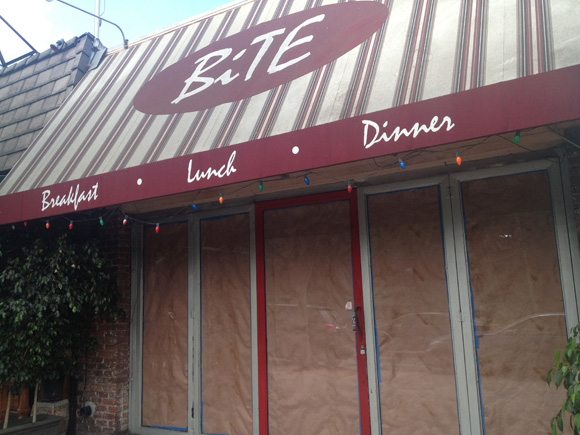 In its place comes Glazed Donut Bistro, which will serve “artisan donuts” paired with dipping sauces.

No opening date is set yet for Glazed, but owner Harry Ben-Zvi said he’s eyeing December.

“We want to redo the donut,” Ben-Zvi said. “… You’re going to see a very talented pastry chef having a lot of fun.”

Ben-Zvi has given complete creative control of the menu to Executive Pastry Chef Gena Lora, who has been an instructor at Le Cordon Bleu College of Culinary Arts in Los Angeles for more than a decade.

Ben-Zvi offered up a “beignet stuffed with fried chicken” as one example of what will be offered at Glazed.

Initially, store hours will be 6 a.m. to midnight, but Ben-Zvi hopes to expand the late-night hours.

Bite owner Arnaud Genevet said an offer to return to Le Petit Bistro, the French restaurant at 631 N. La Cienega Blvd. at Melrose, was too good to turn down. Genevet was a manager at Le Petit from 1993 to 2001.

Very excited about the new donut restaurant in Weho. Designer donuts are all the rage. Cupcakes are over. Donuts are IN!!!!

I’m not surprised Bite is closing. Tango was a decent, affordable place for a long time and it lost most of its neighborhood regulars when it was sold a few years ago. We tried Bite when it opened and then renamed it Blast for its post-dining effects.

The new concept sounds great, so I’ll check it out when it opens.

So who is surprised about this? Tango Grill had a great business. No it wasn’t all pretty boys but it was a place you could go and get a good meal at a good price with a friendly staff. It there was ever a good example of “If it ain’t broke, don’t fix it” this is it! I’m glad to see them go. The food was overpriced and not very good. Maybe the doughnut shop will be better.