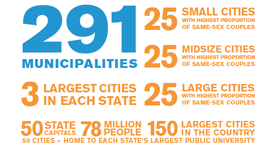 All six cities scored 100 points on the HRC index, which measured six factors. They included the existence of a municipal, county or state law banning discrimination against LGBT people, recognition of same-sex relationships, the LGBT-friendliness of the city as an employer (offers domestic partner benefits, prohibits discrimination, etc.), the availability of services and programs for LGBT people such as human rights commissions (West Hollywood has a Gay and Lesbian Advisory Board), an LGBT-friendly law enforcement unit, and the city’s overall relationship with the LGBT community as measured by public displays of LGBT symbols and participation by city officials in LGBT events. West Hollywood, a city of nearly 35,000 people, 40 percent of whom identify as gay men, was founded in 1984 as a safe haven for same-sex people.

While the six cities were given a grade of 100, West Hollywood benefited in part from nine “bonus points” which recognized factors such as the presence of openly gay city officials. Four of West Hollywood’s five council members are gay. That made up for a lower score than Long Beach and San Francisco on LGBT-friendly law enforcement. HRC reduced the city’s rating slightly because it doesn’t have a LGBT liason with the county Sheriff’s Department, which provides police services to West Hollywood. The Los Angeles Gay and Lesbian Center last year alleged that sheriff’s deputies had abused nonwhite gay people in West Hollywood. Details of West Hollywood’s ranking can be found on the HRC website.

HRC measured 42 California cities and 291 across the country. The cities were chosen according to several factors. All 50 state capitals were included as were the three largest cities in each state. The 150 largest cities in the country were added to the list as well as the cities that were home to each state’s largest public university. HRC also included 25 small, 25 midsize and 25 large cities with the highest proportion of same-sex couples.

The average score was 57. Ten percent of cities scored over 96 on the HRC index. Only 3.5 cities scored less than 10. Rankings by HRC of individual cities can be found in an online database.

It would be more accurate to say that West Hollywood was founded to protect renters, who felt duped by landlords who urged renters to vote for Proposition 13 because it would help keep rents low (it did just the opposite), than as a haven for same-sex people. (Also, please note that “benefited” is spelled with one “t,” not two.)