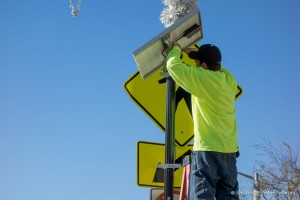 West Hollywood will installing flashing lights at three more crosswalks in the middle of blocks.

The installation was authorized by the City Council on Monday. Councilmember John D’Amico praised the addition of the flashing beacons but said the city needed to do more to improve visibility at the three new intersections such as improving overhead lighting and removing signs or plantings blocking a driver’s view of the pedestrians.

Don’t look for the flashing beacons to be installed immediately. City Engineer Sharon Perlstein said it could take as long as six months before they are installed.

“We’ll have to study the lighting at the intersections before it goes out to bid,” Perlstein told Wehoville. “That could take a month or two.”

While some people have called for flashing lights to be installed in the pavement (as does the city of Glendale), Councilmember John Duran said that would not be practical because the pavement beacons would require constant maintenance and replacement of bulbs.

As for installing red lights to stop traffic when pedestrians cross, Duran said that would also be impractical along Santa Monica Boulevard between La Cienega and San Vicente boulevards.

“It would create incredible gridlock to stop traffic at every one of the crosswalks on that stretch of Santa Monica Boulevard,” Duran said. “That gridlock would spill over onto the other streets.”

A report to the council by city staffers notes that the Los Angeles County Sheriff’s Department has identified four accidents involving pedestrians and one involving a bicyclist at the Hancock Avenue crossing and three pedestrian accidents at the Palm crossing.

a month or two is needed for research to put up a sign that flashes…really???? save that time and research money and just embed the lights into the street. Duran is once again proving himself to be an idiot

LIGHT BULBS cost too much to keep pedestrians safe in west hollywood?! Really?! Yet, the city has no problem spending millions on plenty of frivolous items that add little or nothing to people’s safety! I am very cautious when crossing in the busy crosswalk areas and still have almost been hit! Illuminated crosswalks are needed!

Other cities seem to bear the cross of maintaining “pavement beacons” without much of a problem. I’d think that modern LED technology would go a long way to eliminating bulb replacement concerns. Perhaps Mr. Duran would like to share the studies showing the prohibitive cost of maintaining this type of crosswalk. I think the City should at least do a few pilot projects to see if the embedded flashing lights help. It concerns me that there needs to be months of studying traffic lights in this area to even begin to get bids for the works. Exactly what needs to… Read more »

So, Mr. Duran, what is the cost of the maintenance you say is too much? I bet those people who have been hit crossing the street and those who will be won’t think it’s too much. Sound like the same corporate logic that it’s cheaper to pay claims than it is to improve safety.