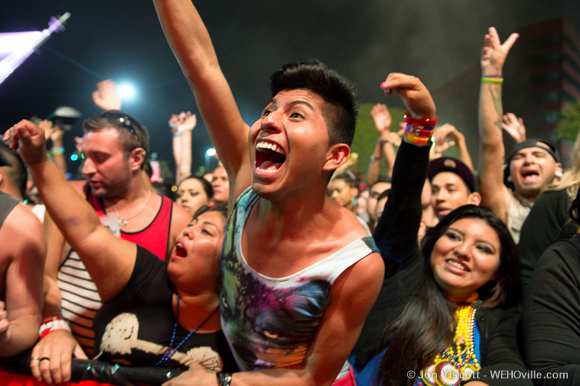 Today is the beginning of an amazing series of events over the next 40 days celebrating LGBT pride and organized by the City of West Hollywood. The One City One Pride events range from a forum of international LGBT leaders to discuss gay rights issues, to classical music performances, to readings by LGBT authors and exhibits by gay artists.

And then there’s the little more than two days of Pride events staged by Christopher Street West, which include a parade on Santa Monica Boulevard on June 8 and what amounts to a pretty boozy party over that weekend in West Hollywood Park.

The contrast is stark. The City of West Hollywood has decided to educate while celebrating the LGBT community’s contributions to modern culture and the ongoing fight domestically and internationally for LGBT rights. Christopher Street West has decided to throw a party.

As Pride approaches, members of the board of CSW should ask themselves why that apparently is the only goal of their non-profit organization. After all, it’s not as if West Hollywood and environs are lacking for gay party promoters. Jeffrey Sanker, Tom Whitman and Luke Nero and Andres Rigal quickly come to mind.

One has to look no further than Long Beach to find a non-profit Pride organization that sees its mission as also supporting other LGBT groups. In 2012, the most recent year for which non-profit tax filings are available, it reported donations of $50,000 to seven local organizations including the AIDS Food Store of Long Beach and the city’s Historical Society. San Francisco topped that with grants of $143,000 to over 100 grantees that year. That’s despite the fact that San Francisco reported slightly less revenue from its Pride events ($1.6 million) than did CSW ($1.7 million). Long Beach Pride revenue was $1.7 million.

Some argue that CSW’s annual event is beneficial to West Hollywood because of the people it attracts from out of town. No doubt the bars in Boystown have a couple of great nights. But is the meager tax revenue generated from more beer sales worth the nearly $900,000 that the CSW event costs West Hollywood to cover the cost of security and street cleaning and other services for the parade and festival?

In a little more than two weeks, the annual Pride parade and festival will be behind us. That gives CSW’s board 52 weeks to think hard about what LA Pride does mean and what it should mean.

There are a number of questions CSW should consider:

1) How much impact does a once-a-year parade down the main street of the gayest city in America have on advancing LGBT rights? If the Rev. Martin Luther King had only staged his marches in Atlanta’s Sweet Auburn he wouldn’t have provoked the heated debates (and battles) that led America to come to terms with the discrimination that black people faced.

2) Should LA Pride be structured as a fund-raiser instead of a party? Could it be an opportunity to generate cash to support LGBT organizations across the country and the world who face much bigger obstacles (including death by stoning) in their fight for equal rights than we do in WeHo?

3) Should LA Pride acknowledge that pride in one’s sexual orientation isn’t a once-a-year thing? Why not a series of educational and cultural events throughout the year that take advantage of the LA Pride brand and show that we LGBT people are about more than partying?

This will take a lot of work, and it’s not at all clear that the current leadership of CSW is up for it. But time is a wasting, so that work, if it happens, had better start on June 9.

I wish pride were to move the parade to Downtown, Silver Lake, or even Burbank, Eagle Rock, Glendale, or Ventura blvd. Somewhere expanding the event, and promoting that LGBT pride is not a concept limited to 6 already already gay blocks of Santa Monica Blvd. LA pride has been on auto pilot for so long each year is just a boring repeat that’s only of any interest to those who’ve not been more than three times. This said if the event or parts of it continue to be held in weho the city should at least pass an ordinance requiring… Read more »

Pride is an amazing waste of time and tax payer money. And sad that there is no charitable component. Sounds a little fishy to my, City Hall… From what I can see, Pride Weekend gives license to everyone to get even more wasted than usual. While a celebration of one’s sexuality really need not merit a month-long series of parties and drunken revelry, how about some education and enlightment of those who fought for this right to party, who paved the way for gay rights, who died so they could live? Dramatic, perhaps, but what makes this weekend any more… Read more »

I think that the City of West Hollywood should take over the Pride parade and festival from CSW. That way, Pride will be as successful and profitable as the Sunset Strip Music Festival.

How about bagging the whole concept of “pride” to begin with? What pride comes at the bottom of a bottle, the bowl of a pipe, or tip of a needle? Pride, as demonstrated at these events, often presents itself as desperation. How about respect? Acceptance? Dignity? Self-esteem? Love? As a buzz word, pride is no more meaningful today than, green, organic, new and improved, or Madonna.

Keep the festival in West Hollywood but why not in Plummer Park? It’s larger than West Hollywood Park and we wouldn’t have to suffer attempting to celebrate on a asphalt street.

I think we need to give the new board of CSW a chance. Theyhave been pretty amazing to work with, which is a far stretch from the old board. I think they are looking to make this more about community, than about corporate. In the past I wouldhave agreed completely, as CSW was too unavailabe, elitest, and out of touch. I have faith in the board, and I for one am going to give them the benefit of the doubt. I hope they prove me right. I think they just might. Stay tuned.

I think its a great idea to move LA PRIDE to a different location. Maybe to another location where people don’t come into contact with the LGBT community. We’re not only proud in our gay mecca of Weho. But why not hold it in the newly revitalized DTLA? Or maybe along Miracle Mile or back to its original Hollywood Blvd? I think if we do that…the negative sway about drinking and guys in speedos will automatically go back to one of politically equality and things the LGBT are actually fighting for. The Pride parade should end at City Hall where… Read more »

San Francisco Pride actually gave back about $174,000 to the Community, more than reported in this article. And, not all of our contingents sport signage or banners surrounding current events and issues facing the community, but considering part of our mission is to be diverse and educate, we’re proud to provide the community with a forum to do so.

Flores. Sorry you misunderstood the message and the content. First at all I have no ill feeling towards Transgender’s in fact i have nothing but respect. It takes a very solid person both emotionally and physical to go through the transformation. Being gay has been a hard battle to fight being transgender i am sure would be a harder one, so I do not condemn or criticize anyone for their rights to exist and for their rights to live with dignity,I simply said that some of them and I am sure you will agree with me, that there is always… Read more »

Very good essay on this topic along with thoughtful questions as to what to do. I think young and not so young people still look forward to the yearly Pride weekend in Weho. But I don’t think the community needs CSW or it’s “LA” Pride. CSW can take their parade and festival to downtown LA and leave Weho to it’s own festivities. Everyday is “Pride” in West Hollywood. But during June, local clubs and businesses can promote their own Pride happenings as they do for the many other special times of the year. The City can program worthwhile events that… Read more »

Pride is a huge waste of taxpayer and city resources.

Like everything else now produced by Weho, pride has become a soulless, corporate event lacking any purpose or reason aside from generating profit.