UPDATE: At 10:13 a.m. the Los Angeles County Sheriff’s Department said the man shot by a Sheriff’s deputy at the House of Blues this morning had been fleeing a fight in the nightclub’s parking lot. According to its press release, he repeatedly rammed his car into an occupied car in front of him. When he refused to stop, a deputy shot him. He was taken to a local hospital for treatment. The Sheriff’s Department still has not identified the man or indicated whether he has been charged with any crime. 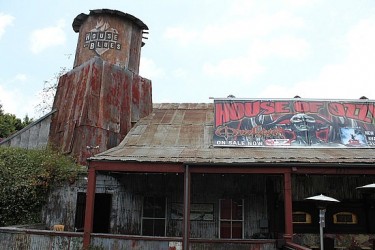 A man is in custody and has been treated for minor injuries after being shot by a Sheriff’s deputy outside the House of Blues nightclub early today.

According to City News Service, a videographer at the scene said the shooting appeared to have taken place in the valet parking area at the rear of the nightclub. The House of Blues is at 8430 Sunset Blvd. at Olive.

A Los Angeles County Fire Department supervisor said firefighters had been called to the scene, but the suspect was not hospitalized. No deputies were injured in the incident, Walker said.

You remember that Professor Shivers when you need help and call 911. I assure you, you won’t be discounting them then.

It’s Tuesday and the sheriff has STILL released NO info? SaveWeho, you can take your respect for the cops and run it up the flagpole . . . and see how many bullets are shot at it!

I remember when West Hollywood was one of the safest communities in LA. The Sheriff’s Dept. were patrolling and you could call them and they’d be there in 2 minutes. But I think with the uncontrolled and unmonitored growth the city has seen in just the past 10 years…the Sheriff’s Dept. doesn’t have the resources to keep up with the increase of people, bars, music venues, outdoor festivals and the general clientele that is luring people from outlying communities into our once safe haven. Maybe its because no one wanted to go to West Hollywood because it was “gay”. Now… Read more »

That guy must have been dumb and drunk

Even as the elected leadership of the city publicly quibbles over having higher profile celebrities in the Gay Pride Parade, they remain conspicuously mum & play suspiciously dumb on matters that the public wants to hear from them on. It’s frustrating as well as mind boggling. Who was it that said the problem with political jokes is that they get elected? True dat!

Another shooting… oy.. who knows maybe same cop.. information is scarce.. went to work this morning to see a firetruck, cops sirens at 9am at Larrabee,.. stood outside my store while a terrible accident happened on san vicente and santa monica.. 2 cabs and a pedestrian at about noon.. the cars parts are still on the street on the sidewalk..yesterday there were 7 cop cars closing same intersection chasing 1 person.. and yesterday hill dale was close off with 5 cop cars.. Hate to say it things are out of control.. look up crime statistics in west hollywood and you… Read more »

Because he was ramming the occupied cars in front of him.

There’s more to this story as I indicated previously. Only at the House of Blues do we have these continuing problems. They must be making very large contributions to political campaigns in order to skirt the law. Any other club would have been closed down a long time ago.

Why in the world does the guy running require deadly force?

There is more to this story than just a fight in the parking lot and one minor shooting by a deputy. LASD was there all night. At about 4:00AM Sheriffs cars were racing up and down Olive Dr. south of Fountain using their spot lights looking for someone. A little while later several people were running down Olive Dr. from Fountain. The House of Blues has been a thorn in the sides of many residents since it opened. Almost nightly the Sheriffs and Fire Department can be observed up there on a call. They attract clientele that have no respect… Read more »

I wonder if it was the same deputy who was involved in the shootings on Palm Avenue….