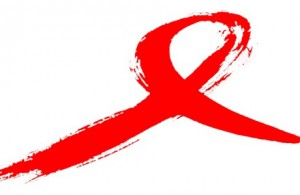 Art AIDS America, an exhibit showcasing 30 years of art responding to the AIDS epidemic in the U.S., will premiere at MOCA PDC in June 2015. This Monday, the city of West Hollywood will host a meeting where people can get a “first look” and learn how they and their organizations can get involved with the exhibit.

Curators Jonathan Katz and Rock Hushka will attend the meeting, which will take place from 2-3:30 p.m. at City Council Chambers, 625 N. San Vicente Blvd. at El Tovar. Parking will be available in the five-story parking structure on the left when entering from San Vicente (not the library parking structure). Validation will be offered for up to two hours.

“2014-2015 is going to be a very exciting year in West Hollywood,” said Andrew Campbell, the city’s Cultural Affairs Administrator, in an e-mail blast about Art AIDS America. “Not only will the City be celebrating its 30thAnniversary of Cityhood, but we will also be helping to support a major exhibition that will be coming to MOCA PDC with significant cultural, political, social and personal ties to West Hollywood: Art AIDS America, organized by the Tacoma Art Museum and co-curated by Dr. Jonathan D. Katz, Director, Doctoral Program in Visual Studies, University at Buffalo (SUNY) and Guest Curator, Smithsonian National Portrait Gallery; and Rock Hushka, Curator of Contemporary and Northwest Art, Tacoma Art Museum. The exhibit will premiere in West Hollywood before traveling to other museum venues.

“The impact of AIDS on West Hollywood, as we all know, was devastating and city-changing. Just as West Hollywood was becoming its own city, it was also hit full strength with the AIDS epidemic which went on to inform important political and social service policies in the city, later adopted in other communities. It seems fitting that as the city celebrates its 30th anniversary, it also has the opportunity to revisit this devastating time in the city’s history, while also providing a new perspective on the impact of AIDS on art and culture in America …

“This exhibit will be an important component of the city’s 30th anniversary programming and we are interested in exploring ways we can have other programming supporting it. We will also have ‘advance’ information about our grant and Pride funding opportunities for 2015, as well, that could support projects in conjunction with this exhibit.”

According to “additional notes” from the exhibit’s curators, Art AIDS America will be “the first comprehensive overview and reconsideration of 30 years of art made in response to the AIDS epidemic in the United States” and will “include an examination of the full impact of HIV/AIDS on the full spectrum of American art.”