A Sylmar man suspected in the killings of three people on Sunday in the San Fernando Valley was charged today with murder and attempted murder involving separate shootings last week in the Pacoima area and West Hollywood. 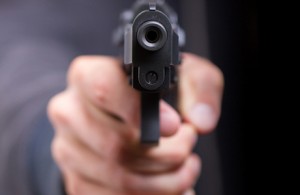 Alexander Hernandez, 34, is charged with murdering Gildardo Morales, 48, who was shot Thursday while driving his pickup truck to work in the Pacoima area, according to the Los Angeles County District Attorney’s Office.

The murder charge includes the special circumstance allegation of murder during a drive-by shooting. Prosecutors will decide later whether to seek the death penalty against Hernandez, who is set to be arraigned Wednesday in a San Fernando courtroom.

Hernandez is also charged with two counts of attempted murder for allegedly firing upon a husband and wife who were in their vehicle in West Hollywood Friday, along with three counts of animal cruelty for allegedly shooting three dogs at a house in Pacoima, killing two and injuring the third, on Saturday.

Hernandez has not been charged in connection with any of the three killings that occurred within an hour of each other Sunday morning, but police said he is a suspect in the fatal shooting spree.

Coroner’s Assistant Chief Ed Winter said a “security hold” remained in effect on the case, precluding his office from releasing the names of the dead.

Hernandez was arrested about 9:15 p.m. Sunday after he barricaded himself inside a residence in the area of Polk Street and Kismet Avenue in Sylmar for about an hour, police said.

Leads gathered by investigators, including the description of the vehicle believed to have been used in the shootings, brought police to the home where Hernandez had holed up, authorities said.

The first of the attacks Sunday occurred at about 5:50 a.m. in the 1400 block of Celis Street in San Fernando, where three of five family members inside an SUV were struck by gunfire, according to Sgt. Frank Preciado of the Los Angeles Police Department’s Media Relations Section.

A woman died at the scene and two people were injured, one of them seriously, according to the LAPD. The San Fernando Valley Sun identified the deceased woman as 22-year-old Mariana Franco and the wounded as her parents, Jose and Beatriz Franco, both Eucharist Ministers at Santa Rosa Catholic Church. Mariana Franco was in a wheelchair, according to various media reports. Two children in the SUV were unhurt, according to The Sun.

At 6:30 a.m. Sunday, a man between 25 and 35 years old was shot at the Sylmar Recreation Center in the 13000 block of Borden Avenue and died at the scene, according to the LAPD. Police said the man had been collecting recyclables in the area and was shot while walking.

She was identified by family members as Gloria Esperanza Tobar. Her daughter, Lucia Montano, told reporters her mother was a Eucharist Minister at Guardian Angel parish in Pacoima. She was shot while waiting to take someone to church.

Detectives were also investigating whether Sunday’s killings were related to a shooting last Wednesday in the Atwater Village area that left a woman wounded.

Tragedy. Congress believed Saddam Huessein had weapons of mass destruction; he did not. Why can’t we make them understand those weapons are right here–people with guns!