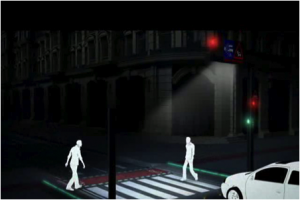 In the latest step toward addressing concerns about pedestrian crosswalk safety, the city’s Transportation and Public Safety Commissions met tonight for a briefing on the city’s proposed “Education, Enforcement, Engineering” campaign and to discuss recommendations it might make to the City Council.

The meeting was in response to a request by the City Council, which on Sept. 8 asked that city staff members develop a plan for installing pedestrian-activated stoplights at all crosswalks on Santa Monica Boulevard between La Cienega and San Vicente. Those stoplights would be synchronized with stoplights at traffic intersections to reduce their impact on traffic flow.

The Council also asked city staff members to study all of the city’s crosswalks, with an eye to improving their safety or even consolidating them. And it asked that they develop an crosswalk safety enforcement and education program.

The Council’s request followed a series of recent pedestrian accidents on Santa Monica Boulevard, the most serious of which resulted in the death of Clinton Bounds, a well-known figure in the city’s gay bar district, when he was hit by a car on Aug. 22.

Melissa Antol, the city’s long range mobility and planning manager, took the commission members through a presentation that included data on pedestrian accidents since 2011 provided by the West Hollywood Sheriff’s Station and a series of options developed with the help of Fehr and Peers, an urban transit consultant.

Fehr and Peers presented three options, each of which had some disadvantages:

1) Eliminate unnecessary crosswalks and install traffic signals on the remaining ones. Steve Brown, a Fehr and Peers consultant, said that would force some pedestrians to walk out of their way to get to a crosswalk and increase traffic delays on Santa Monica Boulevard because of the additional stoplights.

2) Leave the existing crosswalks in place but make them more visible by adding flashing beacons, extending the sidewalk into the street at the crosswalk or adding more lighting. Another option would be to allow pedestrians to cross with a green light at a traffic intersection for a few seconds before the light went green for motorists. But Brown noted that crosswalks without stop signals would still be risky and that adding various lights or other safety measures to all of the existing crosswalks on Santa Monica Boulevard would be expensive. Brown also noted that this option might cause more traffic delays than the first.

3) Make it harder for pedestrians to cross Santa Monica Boulevard outside of crosswalks by installing barriers or fences in the boulevard’s medians. Brown said such barriers might restrict emergency access, be unattractive and be seen as obstacles for certain public events, such as the annual Gay Pride Parade and Halloween Carnaval that take place on Santa Monica Boulevard.

Bob Cheung, the city’s senior transportation planner, said other options that might be considered include reducing the number of lanes on Santa Monica Boulevard and restricting turns during weekend evenings, using crossing guards at key intersections during weekend evenings, installing raised pavement markers at crosswalks and installing crosswalk flags and installing lighted signs that would project a pedestrian safety message.

Lt. David Smith of the West Hollywood Sheriff’s Station told commission members that deputies have undertaken several campaigns to enforce pedestrian safety laws. The most recent was last Thursday, when he and another deputy in civilian clothing monitored various crosswalks from 7 p.m. to 1 a.m. Smith said they issued 93 citations, with 80 to motorists for failure to yield to pedestrians and four for driving while using a cellphone.

Smith said it is essential for pedestrians to keep an eye on drivers, who might not see them. “When I walked down the street I made sure I made eye contact with drivers,” he said. “If you just jump out in the street when it is unsafe, you can be cited. Make eye contact and make sure you look both ways.”

The Public Safety and Transportation commissions agreed to appoint their respective chairs and vice-chairs to a subcommittee that will work with city staff members to refine a proposal for action by the City Council at its meeting on Oct. 6.

The public safety committee should start thinking about putting extra security staff this year for this upcoming Halloween event!!! Thanks to the lack of security my uncle Gilbert Estrada died a tragic death that night when he got caught on fire just because some punk kids thought it would be funny to light up his gillie suit… As for detective biddle or bittle, make sure you run a thorough investigation next time something like this happen, you just actually might catch a culprit!!!

Bottom line – you have no answer to my question, and resort to personal attacks in order to avoid answering it. It is very sad that this man was killed, almost certainly based on all evidence because of jaywalking. But the city needs to make decisions about public safety based on facts and overall traffic patterns, not one or two incidents that apparently have nothing to do with crosswalk safety. And they need to be done based on what really happened here and in other cases (which of course do involved crosswalk accidents), not emotion or as part of trying… Read more »

You aren’t here to debate – you’re here to victim shame a dead man, and and underhandedly attack another local man. I re-read your comments from the discussion about Clinton and it reinforced the idea that you are a disgrace.

I’m done with your sordid behavior

So your response is not to debate the facts, but to smear me? And I am the one who is a disgrace? I’ll leave that to fair minded readers to decide who is doing what. Please explain under what scenario someone who killed a man walking in a crosswalk wasn’t given so much as a moving violation, let alone charged with a felony. That is what is the basis for say what I (and many others here) have. To calling this victim shaming is ridiculous and has no basis in reality. I await your response, though I suspect I will… Read more »

You’re still smearing someone with no proof. You are victim shaming a dead man, and attacking another local man who is concerned about these issues, with weasel worded insinuations about his motives. You have been doing so continuously since it happened – you have nothing but innuendo to back it up but despite claiming you are not focusing on JAYWALKING when discussing these issues, you are back to talking about JAYWALKING, to the extent that you are projecting an unfounded and unevidenced allegation against a deceased man. Your behavior on this issue is one that fills me with disgust. You… Read more »

WHV Your post is based on a FALSE premise – that there has been a sharp rise in the number of accidents. That is not the case. I know this annoys you, but facts are facts. We seem to have a typical (though unfortunately, but also lower than similarly congested communities) number of such incidents. I am not egregiously slantly anything – I am reacting to the facts at hand. And again, I don’t question that drivers are responsible for most of the non-jaywalking incidents. Nor do I question that the city should continue, as they have been, to respond… Read more »

Chris – people can read the articles and see your egregious slanting of the issues surrounding pedestrian safety. The reason we’re discussing this was due to a sharp rise in the number of accidents, starting with the man struck in the crosswalk outside 24fitness, remember? I see you’re prepared to double down on your victim shaming of the recently deceased man – that the police haven’t pressed formal charges is proof of nothing. This is also a side issue – jaywalking precipitating a collision with a vehicle is so uncommon as to be statistically insignificant. The issue that deserves the… Read more »

The only video from city hall that ever went viral is this employees make fun of residents and tell us to “buzz off” because we are such “pests”. City hall was SO angry about this they actually had it legally removed from youtube but was forced to post it again: http://www.youtube.com/watch?v=3liNE0mHmi0 Does anybody know how much of OUR $$$ city hall spent to produce this new CYA video about public safety? Shouldn’t city hall had done something a VERY long time ago in regards to these numerous constant deadly accidents? Why now & only after such a public outcry? The… Read more »

REDUCE LANES??? Are they absolutely insane? That is not the answer. People will flee West Hollywood if traffic gets any worse.

What you call “victim shaming” is actually just stating the facts. To repeat, which seems necessary despite your claims that you read all my posts: 1) The only reason we are even discussing this is because of the two closely related accidents on SM east of SV. And that one of them tragically was a fatality of course means it should be discussed. 2) Both of these incidents by all known and proven facts were jaywalkers. Stating that isn’t victim shaming, it is merely stating facts. (If you have any facts about the fatality not being a jaywalking incident, please… Read more »

JAYWALKING represents a statistically insignificant portion of road traffic accidents between vehicles and pedestrians. Recorded fact Yet, you Chris, talk about it disproportionally – you talk about JAYWALKING in nearly every post you have made regarding pedestrian safety. You are espousing anecdotal myth. You are still victim shaming and disparaging the character of a recently deceased man, despite having NO EVIDENCE WHATSOEVER (beyond anecdotal supposition) as a JAYWALKER. I’ve real all of your posts on this issue this last few months and you are quick to victim shame pedestrians and slow to criticize the drivers – a traffic sting by… Read more »

Once again, no good deeds go unpunished (in terms of initial reaction to the responsible reactions by the city).

WeHoVaudevilian – the reason the jaywalking issue came up is that apparently the two recent SM incidents that provoked all this attention were because of jaywalking. I know facts like that make some people uncomfortable, but they are reasonable to cite as part of this discussion.