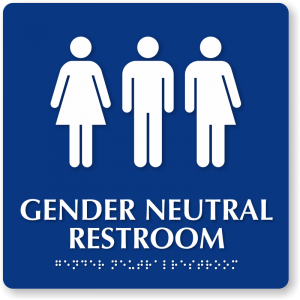 Gentlemen, remember to lower that toilet seat. That is going to matter beginning this month as West Hollywood puts into effect an ordinance that requires that all single-stall restrooms in businesses and places of public accommodation be gender-neutral.

The Council approved the ordinance last June. It doesn’t aply to multiple-stall restrooms.

The new ordinance benefit a number of different users including transgender and gender non-conforming people, people with disabilities or with personal attendants, people with children of a different gender and those who have waited in line for a gender-specific restroom when a restroom for a gender for which they don’t identify remained empty.

The ordinance applies both to existing and future single-stall restrooms — defined as intended for use by one person at a time — in food and commercial establishments, retail locations, and city facilities. Existing businesses are given a 60-day period to make necessary changes to comply with the ordinance; new businesses are required to comply immediately.

In 2006, Washington, D.C.’s Office of Human Rights instituted a similar law that requires every single-stall public restroom in the District of Columbia to be gender-neutral. In 2013, the Philadelphia passed a law requiring new or renovated city-owned buildings to include gender-neutral bathrooms.

New to us, but common in Europe. Keep the urinals. The easy solution is to put new signs up, gender neutral and gender neutral with urinals. Same old restrooms. Let people use whatever they are comfortable with. For safety reasons why not put a window in the door. You can see if someone is on other side of door. It will deter any violence. As long as urinals are not visible through window there shouldn’t be any reason not to. We Americans can adjust.

Lifting and lowering the seat is such a chore! Men don’t really need to use the seat in public and we lift it as a favor. Here’s how it will go: men lift, women lower. Eveyone should do their part of the chore.

this is why i love weho. protection for everyone!

I have traveled abroad. They label “WC” on any bathroom door in Europe. Any human knows how to find one. No further designation necessary.

Multiple stalls? Make individual stalls that close completely. And separate common sink area. Bingo! Done! Wheels do not need to be reinvented. The beach and many bars in LA have already been doing this for a millennia.

Can the idiotic symbols be eliminated entirely?!

Liberals are destroying this country that was founded on christian values

OMG!! That means we can wear anything and wait in line for a stall? This is good. Though I can hear people already complaining that there’s not enough bathrooms in WEHO!

Problem is, if guys put the seat down, they will just pee on it.

Every house, condo or apartment has a gender neutral bathroom…Too bad this is such breaking news.

This is a good idea and smart new ordinance. I agree with “SaveWeho” that including a urinal in single stall restrooms should be encouraged in new construction.

They should also consider having a urinal installed in every Gender Neutral bathroom. Then people won’t have to hear this age-old complaint about putting the seat down. It keeps the restrooms cleaner and it saves a ton of money on water.