Like the fanciful village of Lerner and Lowe’s delightful musical “Brigadoon,” which reappears only once every one-hundred years from the mists of the heather-strewn hills, the cloudy curtains part on the stage at 8300 Santa Monica Blvd. to reveal the inhabitants and their revels, now clad less in fantasy and more in reality – or is it? 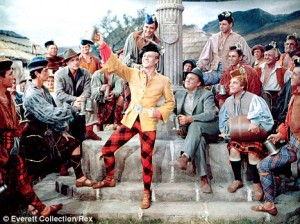 The workings of our City Hall are mysterious, often dark and always obscure. Much of what goes on there is shrouded in the depths of “personnel matters” or “news speak” or not privy to us, we “civilians”. Although we are assured that the well-paid and superbly benefitted minions within are bent over their desks, assiduously tasking away for the betterment of the residents of our beloved city. The world over, civil servants (!) are viewed suspiciously, why not here? The disregarded “political philosopher” Judge George Washington Plunkitt once observed of one municipal employee: “he was a good lad but when he went into the civil service, he began to wear flashy clothes and be seen in billiard parlors” – a sort of Tammany Hall epithet suitable for one’s tombstone? “Too much money and too little discipline” Plunkitt lamented from his shoe shine stand rostrum outside Boss Tweed’s main office. For such astute observations these days we must relay upon other sources.

The second of two pieces covering the latest flapdoodle at City Hall appeared in the Los Angles Times on Wednesday. It starts to read like a dime novel, with appropriate WeHo twists and turns, missing only a musical accompaniment. One might hear, if carefully listening, the bright little tune “I’ll go home with Bonnie Jean!” at the beginning of the LA Times piece. And the collecting of tid-bits, as we are told of the informative spreadsheet so carefully gathered? “Heather on the hill” is heard in the background.

During all this, one must remember that we are in the throes of an election. The minor skill of being able to dodge air-borne clumps of dirt must be refreshed at this time. Quite an election, indeed. With three seats on the Council up for the voters’ choice, and another seat vacant in June, the entire tenor and thrust of the Council will be altered. Change – and change is a mighty force that will rattle the walls at City Hall. However, the machinery that actually runs the city will hardly skip a beat, its many cylinders operating at its usual steady pace. (Cue in the hymn “There but for you go I…”)”) The newly elected or re-elected will appear with new ideas and new plans (“Come to me, bend to me…” plaintively calls out) and be met with the full force of the administration’s inertia. No different in any government the world over. (“It’s almost like being in love…”)

Perhaps we are much better off not to hear of the sniping and nastiness in the cubicles of our municipal shrine. Yet, I am delighted that there is a burst of humanity there, a sign that certain sorts of high jinks still have a place in the political world of our town as it lurches into new territory of planning, new threats of major developments, new faces on the dais at the Library Temple known as the Council Chambers. Consider how dull it would all be if we were asked to live a life of calm, not able to face the terrors of crossing the street, required to breathe air without the components of diesel soot or Co2. A small voice continues to prod me to give in to the possibility that not just our little city, but our entire world, teeters on the brink of bad decisions and reliance on that most indistinct of all crutches, “Faith,” as a bulwark against the changes we face. A louder voice reminds me that Reason, our singular human trait, will prevail. So, thank you City Hall for the interlude and for giving me the opportunity to relive some of my best years when I and my then promising baritone found Brigadoon . Carry on – as no doubt you will.