An examination by WEHOville of actual spending by real estate development interests in the West Hollywood City Council election shows incumbent John Heilman and challengers Joe Guardarrama and Lindsey Horvath appear to be ahead of Mayor John D’Amico. Roughly 36 percent of the $622,000 in campaign donations thus far comes from real estate interests, which include developers, real estate agents, real estate investors and lobbyists and lawyers who work for developers of West Hollywood projects. 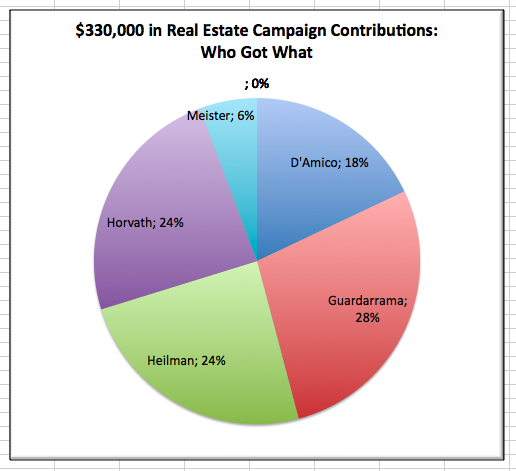 Our Feb. 25 report on campaign spending was based on finance reports filed through Feb. 14, 2015, which included $95,000 donated by real estate developers to “Friends of West Hollywood: A Committee to Elect John D’Amico, John Heilman, Lindsey Horvath & Joe Guardarrama to the West Hollywood City Council.” The name of that so-called “independent expenditure committee” indicates that it supports D’Amico. But all of its spending thus far has been in support of Heilman, Guardarrama and Horvath. According to political insiders that committee decided not to spend its money to back D’Amico’s re-election campaign because of his endorsement of Lauren Meister, known for her stand against what she sees as overdevelopment in West Hollywood. The “Friends Of” committee’s statement of organization names George Urch as its “principal officer.” Urch also was the principal officer of the “Friends of West Hollywood” committee that supported John Duran in his 2013 re-election campaign. Duran is a strong opponent of Meister.

Meister, who is a critic of what she sees as the City Council’s willingness to override existing zoning laws to accommodate new development, has received only four percent of the money donated by real estate interests. Other candidates in the race have received less than one percent.

The latest campaign donation reports show that the Tuesday election, as in years past, continues to be dominated by donations from out of town interests, which include real estate developers, billboard companies that need the Council’s approval for some projects and city vendors such as Athens Services, the trash collector, whose contract was extended for 15 years by the Council last year without putting it out to bid.

So, D’Amico only took $59,400 in developer money, and his handmaidens, Guardarrama and Hovarth, took in $92,000 and $79,000 respectively. Seems as if this trio has been bought and gift wrapped by corporate real estate interests. Why should the “committee” give money to D’Amico when they already own him

It actually makes her a hypocrite.

I could never trust a candidate who is afraid to put his beliefs and his agenda in writing for all to see.

Had a conversation with Joe Guardarrama this afternoon answering my stated questions and exploring additional subjects. I have a much better grasp of his objectives, timing, past decisions and alliances Anyone interested in doing so, is also free to call him at 310.213.3776. I believe it should be his or anyone’s prerogative not to want to be involved in an online thread. Please go to the horse’s mouth and get your own information.

At the candidates forum last Wednesday, Joe Guardarrama said with a straight face “We need to get rid of independent expenditure campaigns” without ever mentioning that he was one of the biggest beneficiaries of these pro-development PACs. With Independent Expenditure campaigns, the beneficiaries can hide the support they have from mega-developers. The recent mailer from “Friends of West Hollywood”, one of those pro-developer groups, accused Lauren Meister of taking money from two or three developers. How shocking, that is at most $1,500.00 which hardly makes her a creature of the developers and their lobbyists that want to control West Hollywood’s… Read more »

I will advise my friends and neighbors to avoid voting for Heilvathorrama.

I wish they’d find another city to “befriend”, there’s gotta be a host of other cities with candidates willing to bend over for their money and have their taxpayers pay them back handsomely.

Hi Shiela, In speaking with Joe after the forum Wednesday evening, I asked similar questions and why he had not responded to my and several of your requests on Wehoville. Apparently he is not willing to join the conversation on Wehoville but asked to be contacted on his website. He and his campaign manager Marco seemed shocked that his website address was not printed on any of his campaign material, a seemingly small or large detail. JG4WEHO.com. I followed up with additional specific questions last evening and am awaiting answers: 1. What sizable projects did Joe vote for or against… Read more »

Joe seems… How do you say…What’s the word or idea I’m looking for… Oh yeah: smarmy. Good ole Joe reminds me of Tracy. Tracy Flick that is. That’s it! He reminds me of Tracy Flick from the movie “Election” starring Reese Witherspoon and Matthew Broderick. There’s just something (ok, a lot of things) about him I don’t trust. If you’ve seen it, you know it. If not, smarmy defines.

Exactly. We know NOTHING about JOE so his campaign and all his fundraising prowess and his harping on ethics reform (especially when it seems as though his QUITTING planning commission was because he wanted to be ETHICAL, and uninvolved in city politics) is a big mystery. Its like the dating game – you don’t know who’s behind the wall when it goes to Guardarramma, plus his inability to answer questions is a big red flag.

WEHOville’s reporting on city hall, city council and the campaigns has made me a far more informed (and far more angry) voter.

What in the world do big developers know about Joe Guardarrama that we, the residents, don’t? What is he saying to big developers that he’s not saying to us? Most of us had never heard of Joe until he pulled papers to run for Council, but he immediately became the darling of big development? What’s that all about? Now, more than ever, Joe needs to answer the questions I’m asking for the 6th time in these comment pages: Context: When Joe resigned as Lindsay Horvath’s appointee on the Planning Commission at the PC meeting on March 4, 2011, he said,… Read more »