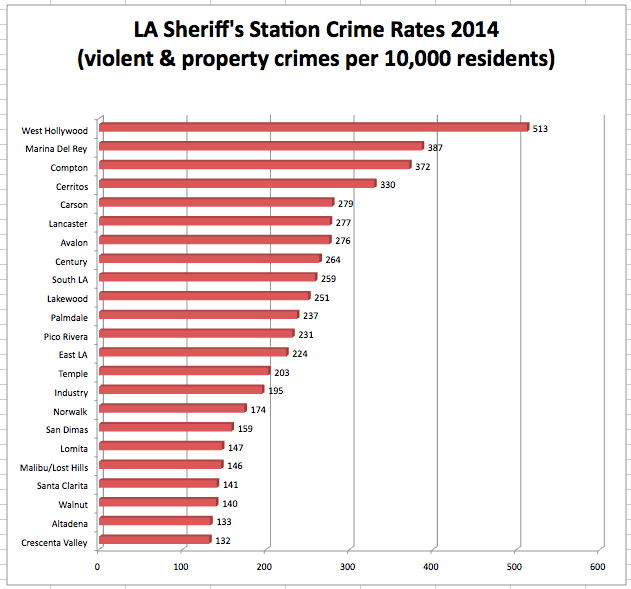 A report on crime in West Hollywood that will be delivered to the City Council tonight says the city “continues to be a very safe place to visit, live and work.”

But that seems to be contradicted by a recently released report by the Los Angeles County Sheriff’s Department that shows the overall rate of violent and property crimes reported to its West Hollywood Sheriff’s Station last year tops that of the other 22 territories the Sheriff’s Department serves in Los Angeles County. For example, West Hollywood’s 2014 reported crime rate is 98 percent higher than that of the department’s South Los Angeles Station and 38 percent higher than that of its Compton Station.

The department’s report says the WeHo station reported 513 crimes per 10,000 residents, followed by Marina del Rey with 387 and Compton with 372. At the bottom of the list is Crescenta Valley, with 132 crime reports. Of course with their much larger populations, more actual crimes were reported in Compton and South Los Angeles. However the crime rate is generally accepted as a much more relevant measure of an area’s safety than is the absolute number of crimes. The WeHo data also includes figures from small areas such as Universal City which are served by the West Hollywood Sheriff’s Station. They account for only a few reported crimes.

The 2014 report chronicles only “Part 1” crimes, which are among the most serious. They include crimes against people and property such as arson (no reported incidents in West Hollywood), homicide (one incident), rape (seven incidents), car theft (87 incidents), robbery (theft that involves force; 96 incidents), burglary (breaking or entering; 220 incidents) and larceny (theft that doesn’t involve force, such as stealing a bicycle or shoplifting: 1,191 incidents).

The county Sheriff’s Department report does not chronicle “Part 2” crimes, which include non-violent activities such as prostitution, purchase or sale of illegal drugs, driving under the influence of drugs or alcohol, public drunkenness, disorderly conduct and vagrancy. However the Public Safety Department report does document the number of drug-related offenses in the last half of 2014 compared to the same period in 2013. Possession of various drugs dropped from 181 instances in the last six months of 2013 to 144 in the last half of 2014. A major reason for that decline was the reclassification of possession of less than an ounce of marijuana as an infraction rather than a misdemeanor.

The Public Safety report  breaks down crimes reported in the last six months of 2014 by area of the city. The biggest increase in crime was in the city’s so-called “East District” (east of Fairfax Avenue) where overall crime reports were up 28 percent. Of 237 crimes reported, 220 involved theft of some sort (car break-ins, burglaries, strong-armed robberies).

The “City Center,” which runs from La Cienega to Fairfax, reported only 215 crimes in the last half of 2014, barely up from the 212 reported in the same period of 2013. Of those, 191 involved theft or burglaries of some type.

The hiring of a consultant to conduct a “report card” survey comes at the suggestion of Mayor John D’Amico, who has said he has had at least five conversations with Capt. Gary Honings, head of the West Hollywood Sheriff’s Station, about alleged improper behavior by deputies.

The pages that follow offer a breakdown of 2014 violent and property crimes by type (Page 2) and crimes by type in the last half of 2014 compared to the last half of 2013 in the city’s “East District” – Fairfax to La Brea (Page 3), “City Center” – Fairfax to La Cienega (Page 4) and “West District” – La Cienega to Doheny (Page 5)

Eastside’s Target is a “target” for shoplifting, but I’m surprised at the number of strong-arm robberies. Could it be that our older residents have something more to worry about?

does this crime rate include development approvals???
just sayin.

y’know, it’d be neat to have a politico-esque campaign promises vs actual action rating on all council members that we can reference regularly

Let’s continue to ignore that extended meter hours in the West Side have forced people who work at bars and come to WeHo to visit the bar district to park further East. These people, especially bar workers with pockets full of tips, are easy targets as they now how to walk 1-2 miles or more from work late at night. In fact, a local bartender interviewed regarding this exact crime/meter hour issue predicted this — Google it. This wrongheaded meter hour policy — which Heilman supported over D’Amico’s objections — continues to demonstrate why he does not deserve re-election. I’m… Read more »

Maybe we are just the most diligent about REPORTING crime.

Many of these crimes are easily preventable. Locks, alarms, video cameras, common sense of not leaving valuables in car and being aware of your surroundings.

WTF is that all about? Man o man and this clown Heilman wants back on. Fugetabout it. I knew this would be the case. I just knew it. Besides reading about the crime stories here on a WeHoville I just feel the City has gotten a bit more skanky with more visible tagging, homeless all over the place, etc. West Hollywood should be at the bottom of this list by virtue of our demographics and wealth. But nope – it’s an outside problem in that the skank trouble is coming in from the outside and that my friends is a… Read more »

SaveWho, the west side, the area with most bars has seen a decrease in crime! The problem is the out of control homeless issue on the east side of town coming from Los Angeles. The LAPD does little to monitor the La Brea corridor because it is a collection of homeless shelters, food pantries and warehouses.

The new development is great for the City but the city planners should force one of these developers to make room for a substation!

It’s well known that any area with lots of bars, clubs, nightlife will bring in the seedy element. It lures more undesirable people that are prone to illegal behavior. Not to mention Weho is now one of the most expensive places to live. Add in our overdevelopment and cramming as many people as we can into the city…and don’t forget the hundreds of “temporary residents” via AirBNB. You’ve basically opened the door for criminal activities.

I certainly feel less safe than I did say 10 years ago.

This doesn’t paint a pretty picture of “The Creative City” ™ does it? I don’t feel unsafe, but I do think that cars and other property are constantly at risk for break-in or vandalism. Perhaps it’s time for a new approach. Maybe more foot or bike patrols around the neighborhood streets. Maybe more engagement along the commercial corridors. I’m not sure, but for all the money we spend on the Sheriffs contract, you’d think we might have better results. I don’t see Universal City on this chart. Considering it has far more non-residents at the theme park or City Walk… Read more »