A recently released study of housing costs in California suggests a major conflict between the professed desires of many West Hollywood residents and leaders to keep housing affordable and to also curb development. 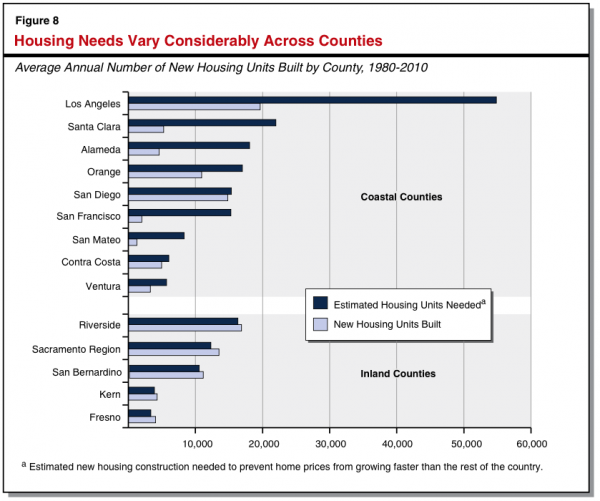 The study says that “between 1970 and 1980, California’s home prices went from 30 percent above U.S. levels to more than 80 percent higher.” That more expensive housing results in people commuting 12 percent further each day to work in greater Los Angeles — increasing traffic in a city such as West Hollywood, where only 26 percent of those who work here also live here according to the city’s 2014 housing study. It also makes it difficult for companies to find and keep good employees, the LAO study says. 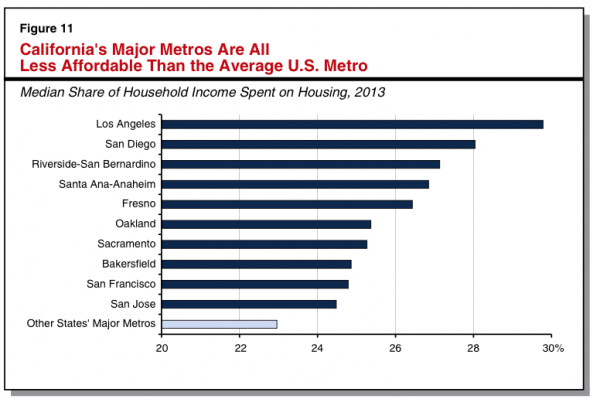 The report says 100,000 to 140,000 new housing units are expected to be built in the state each year. But to reduce the increase in housing costs, it says an additional 100,000 units would need to be built annually, with those exclusively in “coastal communities” such as Los Angeles, San Diego and San Francisco.

A major issue, the study says, is resistance by existing residents to increased housing density.” For many homeowners, their home is their most significant financial investment. Existing homeowners, therefore, may be inclined to limit new housing because they fear it will reduce the values of the homes.” The study said existing homeowners also often resist change for other reasons. “Many people, as they become accustomed to their lifestyle and the character of their neighborhood, naturally are hesitant about change and future unknowns.” Another obstacle to building new housing, according to the study, is the use by development opponents of the state’s environmental quality act (CEQA).

“The CEQA process can provide valuable information to decision makers and help to avoid unnecessary environmental impacts,” the study said. “The CEQA review process also provides many opportunities for opponents to raise concerns regarding a project’s potential effects on a wide array of matters, including parking, traffic, air and water quality, endangered species, and historical site preservation. A project cannot move forward until all concerns are addressed … In addition, after a local governing board approves a project, opponents may file a lawsuit challenging the validity of the CEQA review. As a result of these factors, CEQA review can be time consuming for developers.”

Jonathan, if you actually read the report, you will notice that it cites cities zoning policies that favor hotels and commercial development are a cause of a lack of housing. There are numerous reasons for the shortage, and the report lists all of them in a very balanced and scientific manner. Why is it easier to build an office tower or hotel than residential housing? Taxes. A hotel means tons of revenue from sales tax and hotel fees. Commercial buildings mean revenue through business licenses and sales tax. Residential units only make cities money via property taxes, which would be… Read more »

there is no requirement for housing for any city that’s why Bel Air and Beverly Hills are not obligated to build housing be it market or low income. The real common sense would be to building hundreds of units near a transportation line in a much cheaper area to build and then if people who love West Hollywood want to be here they can come in for the day or evening and still experience the great parts of our city

Why is lack of new housing being blamed on complaining residents, while weho is currently going through the most massive commercial hotel building project. WeHO’s population density has always been among the highest in the state/country. It is not selfishness in tiny weho. The report can not be tossed in to mean ALL cities, locals, neighborhoods objecting to more building is causing the problem. We have no land to build more housing. But always more room (after rezoning) for massive increased HOTEL ROOMS in such limited available land in weho. The city wants hotels, not housing. This is trying to… Read more »

Dear Michael: You sound pretty angry — which can be a good thing because it can energize people to action. So… are you moving into action? Have you organized people in your neighborhood to come and speak out at City Council Meetings or at Planning Commission Meetings? Have you put together any ideas that neighborhood people can use to band together in an effort to save our City? Come join us! There are so many of us around the City who are trying to make the system more responsive. Just go to a City Council Meeting one Monday night and… Read more »

No I’m not angry at all-just telling it like it is. PASSION EQUALS ENERGY NOT ANGER. Anger isn’t in my vocabulary so you might look in the mirror.

I’ve done all that. They don’t care what you say. It goes in one ear and out the other. They’ve to go through the process, and part of that is listening-I mean ignoring the public-they’ve to do it. Greed and $$$ has taken over block by block not only in West Hollywood, La, Hollywood,, Silverlake, Echo Park, Marina, Santa Monica, West LA etc.

“At one time or another, acceleration of population growth . . . has been sought by militarists in need of cannon fodder, by rulers in search of hegemonic expansion, by industrialists in want of cheap and docile labor, by ecclesiastical spokesmen in search of souls, and by Land and and other Speculators hungering for unearned increment.” Joseph J Spengler

Housing prices weren’t an issue when California had 15 million people.

Well actually, it wasn’t a “study” it was a legislative analyst’s report (much less rigorous than a study and gee whiz…I wonder who commissioned it…). And actually it was mostly about coastal cities. And actually, it probably makes little sense to imply that there is a “conundrum” in WeHo…and that all responsibility for affordable housing lies at the feet of a small city the size of West Hollywood…particularly considering that West Hollywood has exceeded its State allocation of required affordable housing units by something like 2000 – a fact of which this City should be quite proud. I think it’s… Read more »

News flash people once again-West Hollywood City Council only cares about $$$ and greed….period. They don’t care about their citizens, or a preserving the “Urban Village” All great ideas listed that goes in one ear and out the other. They might throw a small bone here and there. Basically there getting rid of rent control/rent stabilazation one building at time. This way they think nobody notices it. They don’t care about their citizens..period.

Check the vacancy rates for weho on CA state dept of finance website. 5% is healthy and anything beyond that means something’s out of alignment. If you’ve witnessed lots of building that doesn’t ration out to an increased population than you are suffering from the international investment influences. They don’t care about your community nor do they mind parking their money where buildings remain vacant. It’s a tax write off and often safer than the banks and stock trade. Same happening in SaMo. Eminent domain ought to be declared on these properties. More building will only exacerbate the issue.

While the Census Records only indicate a growth of 800 residents between 2010-2013, you must also factor in all of the apartment buildings whose landlords invoked that dreaded Ellis Act, thereby forcing people out of their apartments and unable to rent in WeHo due to the high rental costs. I received the Ellis stats from the WeHo City Clerk’s office and they are appalling. A rather recent article in The Beverly Hills Press (the antithesis of the unfortunate rag The West Hollywood Independent has become – I think they only stay in existence due to the Public Notices placed on… Read more »

All good points. The “bottom line” is Weho doesn’t give a rats ass about it’s citizen, or care about facts. They are only interested in ONE thing. $$$$$$$$$….period! You can rattle on about this and that..which is fine..but there NOT listening. Oh and greed has taken over to.

West Hollywood City Council doesn’t care about it’s citizens. They would approve dog poop for building buildings if it would bring in revenue for them. They only care about two items: Greed & Money is the bottom line. They let you speak at their meetings, and are very gracious, and “act” like they care-but it goes in one ear, and out the other. Do they care about Disco Dan above? No! There will be no balance -all good points by Brian above-it’s all about money & greed today. By the way you can’t get down any street anymore-even the side… Read more »

I checked the Census Records and West Hollywood grew by only 800 people between 2010 and 2013–hardly a population explosion. About 250 people a year move to West Hollywood. This could well be because of hard economic times where people are sharing rooms/apartments. Everyone is concerned about traffic, but it is not just traffic in West Hollywood that is different it is everywhere in Los Angeles County. I think the root cause is that more people walk and talk on their cell phones and cars just move slower. Could we experiment with something that would block cell-phone transmissions along Santa… Read more »

West Hollywood still has one of the greatest densities of an urban 1.9 square miles. There are other suburban areas that could sustain more density but I am not sure how West Hollywood can accommodate much more growth; perhaps after we see a subway station locally…. West Hollywood’s biggest challenge is simply to preserve the stock of affordable rental housing from demolition for luxury housing. Sure we need housing, but California also needs water, power that is not coal generated and a functional educational system. None of those problems are solved by adding additional population. Perhaps California is nearing its’… Read more »

Real homes (detached, single family on > 1/4 acre lots) are expensive because Los Angeles is overpopulated. A solution of sorts is to restrict immigration. That will take time. Meanwhile, those who complain can blame the open borders politicians [or those who voted them into office], starting with Kennedy and LBJ in 1965. It’s a bit late now. Most people would rather live in a real home than in an apartment or condo. Most of the articles promoting high density (apartment) development are sponsored by developers, not the general public. T’were ever thus. ” . . . the greatest destroyers… Read more »