When it comes to matters of public safety, there has been some real news of late. But you wouldn’t know that if you had attended last night’s Public Safety Commission meeting.

Last week WEHOville reported that the L.A. County District Attorney’s office had told the L.A. County Sheriff’s Department a month ago that it would not file charges against the three deputies involved in the shooting death of one young WeHo resident and the serious injury to his friend as they tried to escape a knife attack last year on 939 Palm Ave. Those deputies remain on duty in West Hollywood. If you were on the Public Safety Commission, wouldn’t you wonder why the Sheriff’s Department didn’t bother to inform Capt. Gary Honings, who heads its West Hollywood Station, or City Manager Paul Arevalo, of its decision? Wouldn’t you be curious that, while residents of the apartment building at 939 Palm said they showed deputies photos of the attacker, the deputies claimed they didn’t remember seeing them as part of their explanation of why they shot and killed the wrong man? Wouldn’t you have questions about why the L.A. County Sheriff’s Department is prepared to settle a $25 million damage suit filed by the family of the dead man if the District Attorney’s Office has determined that the deputies did nothing wrong? 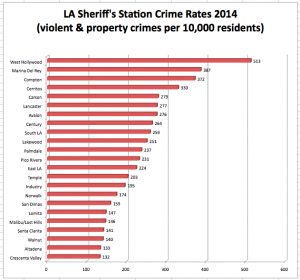 Earlier WEHOville reported a Los Angeles County Sheriff’s Department study that said our city has the highest crime rate of any of the 23 areas it serves — another report that those who head the local Sheriff’s station didn’t know about until we informed them. The City Council white-washed that revelation, accepting the argument that WeHo’s crime rate couldn’t be accurately compared with that of other cities because we have so many out of town visitors. If you were on the Public Safety Commission, wouldn’t you ask if it really matters whether the people who break into your car or rob you on the sidewalk are your next-door neighbors or visitors from Culver City or Sherman Oaks? Crime is crime, wherever the criminals come from. And again, why does the L.A. County Sheriff’s Department not bother to tell its WeHo station of its findings?

And then there was the opinion piece by Ben Coleman, the public safety advocate behind Keep Weho Safe, published in WEHOville last week that revealed several organizational issues at the local Sheriff’s station. One of them is a nighttime patrol schedule that results in deputies heading back to the station to fill out reports before the city’s bars close and empty drunk and disorderly patrons out onto the sidewalk. Wouldn’t you, as a Public Safety Commissioner, wonder what the local Sheriff’s station is going to do about that?

And wouldn’t you ask that representatives of the Los Angeles County Fire Department and of the local Sheriff’s station provide their reports about monthly fire and crime statistics before your meeting, as is the case with reports from city staffers to other city boards and commissions, so that you can analyze them and ask questions?

The good news is that on May 31 the terms of all appointees to WeHo city boards and commissions (except those newly made by Councilmember Lauren Meister) will come to an end. Here’s hoping that, as they consider new appointees, the members of the City Council will look for residents with a healthy sense of skepticism (something evident, for example, on the Planning Commission) as well as a willingness to praise and support what is working well. Our boards and commissions should be populated by residents who see their job as asking provocative questions and digging deeply rather than just listening passively and nodding their heads and smiling.

Henry E. (Hank) Scott is the publisher of WEHOville.com.

@ Woody: and you don’t think the recent appointments were for personal and political reasons? What? Well as Manny said they have been around a block or two but clearly came on a direct flight from Krone izem, that outlying duchy of Catgerine the Great. Fortunately there are a few that have some credentials so let’s see how they use them.

i’ve posted this before here wont matter if you replace them personally, I’ve known a few through the years voicing frustration of being limited by the city. we saw it firsthand at the crosswalk meeting. the city dictates what commissions can & cannot recommend where they can & cannot participate commissions/boards are perfect scapegoats draws negative vibes away from the council/city gives them a 2nd chance to listen without losing face a broad brush is painted in this article and misses the issue Lauren Meister, Lindsey Horvath, Heidi Shink, Joe Guarderama, Larry Block, Steve Martin, Sam Borelli, Cole Etterman &… Read more »

do you mean deer, dear?

I can’t believe it…..I actually agree with Woody (sort of)

Although I think some of Council Member Meister’s appointments were….hmmm, ridiculous…..at least they were people that have been around the big weho block and, like it or not, have some knowledge to what’s going on in this town.

No dear in headlights for Meister appointees……maybe just a mean pitbull lunge once and a while.

I have always felt that some if not many of the commissioners & board appointees were merely window dressing, who sit only as a formality, a little if not a lot out of their league, & not entirely in touch with the best interests of the community but only to their appointers. That’s why I was so pleased with Councilmember Meister’s appointments of tried & true community activists who will only increase their service to the community in their new & official positions of leadership. There has been so much WeHo talent & experience wasted through the years by appointments… Read more »

This doesn’t surprise me.

The only time I went to a Public Safety Commission meeting was when they had a joint meeting with the Transportation Commission to discuss the crosswalks.

WOW!….The PS Commission was clueless. It almost looked like the members didn’t even live in West Hollywood. They were like dear in headlights. No constructive comments or observations.

By contrast, the Transportation Commission was solid, informed, professional and offered remedies and recommendations. Some of which we see on the street today.

So far, (other than Planning and Transportation) my other two visits to Commissions have been sadly disappointing.

As long as I can remember, the attitude from City Council (and by extension, the Public Safety Commissioners) is that the WeHo Sheriffs can do no wrong. They have stood behind ever station captain for every decision (good or bad) and made a big deal about having a LGBT liaison – as if that alone was going to change the homophobic culture and attitude towards policing our community. Sheriff Baca was supported up until the day he resigned. You’d think that some constructive criticism would be healthy once in a while. Ben Coleman gave us examples of things that could… Read more »