West Hollywood is looking for artists who can re-imagine the landscape as part of “Can You Dig It?”, an outdoor art installation project that speaks to California’s drought.

Temporary, site-specific projects to be commissioned for Can You Dig It? will be installed within Plummer Park and along Santa Monica Boulevard. They will fall within one of two categories:
· Three-dimensional: artwork created in nature that uses organic materials and/or introduces man-made materials to highlight nature
· Performance-based: artworks focused on process, site and temporality, created by individuals acting in a one-on-one relationship with the land. 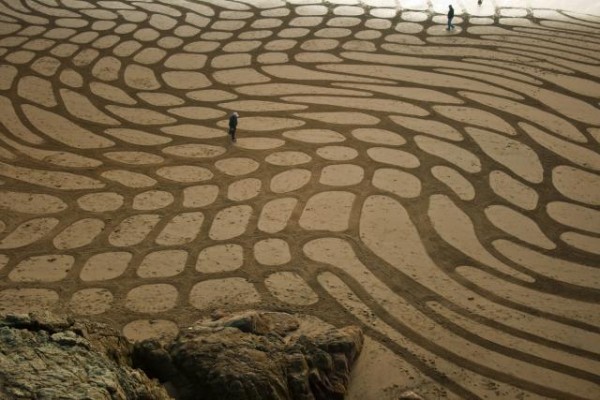 The exhibition is part of Art on the Outside, the city’s ongoing public art program that installs rotating temporary artworks on West Hollywood’s medians and parks. “Land Art,” “Earthworks” or “Earth Art” are terms that refer to an art movement that emerged in the U.S. in the late 1960s and early 1970s in which landscape and the work of art are linked. The artworks frequently exist in the open, left to change and erode under natural environmental conditions. Examples of notable land art projects include: Andy Goldsworthy’s “Woven Branch Arch” and Maya Lin’s “The Wave Field.”

The deadline for artists to apply is Aug. 26, and finalists will be selected on Nov. 5. Installations will begin in November, with an opening reception planned for January 2016. Applicants are required to be professional artists or artist teams residing in the United States. An informational question and answer meeting about the project is scheduled for Aug. 5 from 6 to 7:30pm, at the Plummer Park Community Center, 7377 Santa Monica Blvd.. To RSVP, email Rebecca Ehemann, public art coordinator, at rehemann@weho.org, with the names of the artists who wish to attend.

The threat of a severe water shortage is a serious one in the City of West Hollywood, where daily existence depends largely upon water from sources outside the region. The city has made adjustments to its irrigation controllers to reduce water consumption by as much as 50 percent. The city also launched a public-awareness campaign — a “Prescription” for water conservation — to remind the community in West Hollywood that it’s the little day-to-day decisions each of us make that contribute to collectively conserving water. Conservation tips and information are available on the city’s website at (www.weho.org/waterconservation).

I’d like to see something done with the medians that run down the middle of Santa Monica Blvd. Is faux grass being considered…like that in use on the southwest corner of San Vicente and Santa Monica? Or rip out the dead grass and place drought tolerant ground cover. (We also need some kind of sculptural “divider” to keep people from crossing the Blvd outside the crosswalks and trampling whatever they put there.

Would love to see a competition/exhibition like this specifically for the parkways in the residential streets. Would love to see some uniformity or consistency with these using drought tolerant materials. The parkways are the responsibility of homeowners to maintain yet very little is understood about what can actually be done.

We should be so lucky to have such caliber of applicants as Goldsworthy and Lin. Perhaps the applicants might envision Plummer Park in the broadest sense of a canvas. Rather than focus on an “installation ” hopefully their submissions ) could be expanded to enhance the eventual refurbishment of it’s current buildings rather than limiting the goal to a isolated installation.