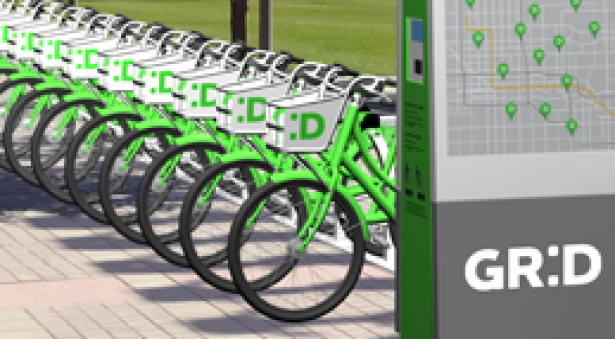 West Hollywood plans to launch a bike share program next spring, with 150 bicycles available at 20 stations throughout the city and several outside the city limits.

Twenty self-service stations will be constructed throughout West Hollywood, and the city hopes to create additional stations at key destinations outside city limits. For example, it hopes to create a station at the intersection of Hollywood Boulevard and Highland Avenue to give West Hollywood residents access to the Metro Red Line subway and establish a station at the Grove shopping center and Farmer’s Market. The city soon will be launching a “suggest-a-station” website to solicit community input on desired bike share station locations in WeHo.

West Hollywood and other members of the  Westside Cities Council of Government have been working with the L.A. County Metropolitan Transportation Authority (Metro), which operates the county’s subway and bus systems, to try to integrate their bicycle system with one proposed by Metro. Metro expects to implement its program in phases, with Phase I launching in downtown Los Angeles by summer 2016 and Phase II launching in Pasadena in 2017. Hollywood is the closest Metro bike share expansion area to West Hollywood.

But the city’s Community Development Department has determined that Metro’s plan to retain sponsorship and ad revenue from the program while requiring participating cities to fund 65 percent of the operation will be a financial burden. In addition, the CycleHop “smart bike” system is more technologically sophisticated.

West Hollywood has allocated $500,000 in its 2015-2016 fiscal year budget to cover the costs of the initial bike share equipment and installation. In a memo to the City Council, the Community Development Department projected annual operating expenses of $344,000. It projected revenue from user fees, sponsorships and advertising of up to $563,000 a year, resulting in more than $200,000 in annual net revenue to the city. The projected fee revenue is based on what Santa Monica now charges for its program, although fees haven’t yet been set for West Hollywood.

“Bringing bike share to West Hollywood means more residents and visitors will have a transportation option that’s also great for a healthy lifestyle,” said West Hollywood Mayor Lindsey Horvath. “The more bikers we have, the safer biking will become, which will eventually transform our car-centric culture.”

In recent years, the City of West Hollywood has made investments in bicycle infrastructure such as bike racks, bike lanes and routes across the city. It has added bike sharrows to remind motorists and cyclists that a roadway is a shared space, is moving forward with the installation of bike lanes on Fairfax Avenue and has increased the availability of bike racks for parking. In addition, the city is in the process of updating its Bicycle and Pedestrian Mobility Plan, which evaluates and recommends improvements to the city’s existing bicycle network and facilities

Horray! I have been waiting for years for this to happen. My only hope now is that it makes sense. It makes sense to exit the Redline Metro at Hollywood and Highland, walk out to a bike station and ride the bike to wherever I need to be in Weho. It makes sense to grab a bike at a grocery store parking lot lets say Gelson’s on Santa Monica and ride my bike to the beach in Santa Monica. Please Please! integrate the bike programs around the city or we will be stuck getting back on busses. I know this… Read more »

I don’t know, but I still think that CycleHop is an unproven vendor. They seem to have focused on cities that doesn’t exactly elicit bicycling in my head (Atlanta, Phoenix, Orlando) and their biggest systems is still only 500 bicycles strong compared to the more established vendors. I don’t know their financials but what are the chances that their promised ‘revenue neutral or revenue positive’ will really happen? I really question their long term viability as a bike share operator for West Hollywood and especially question their set up (smart bike vs smart dock, 60 minutes total versus unlimited) compared… Read more »

@ Franz — It’s definitely far less than ideal that the Westside cities and Metro are going with different systems. Hopefully they will mesh within a few years. Here’s the staff report, which explains why WeHo went with CycleHop: http://weho.granicus.com/MetaViewer.php?view_id=&event_id=693&meta_id=99314 One of the major factors in going with CycleHop was that Metro was going to require cities to pay a huge portion of the costs of bikeshare, but would not allow them to keep revenue from advertising. So, Metro’s system would have cost the city a substantial sum, while CycleHop is projected to be be revenue neutral or even revenue… Read more »

Why did they choose Cyclehop? Ugh. It’s an unproven system and it won’t be compatible with Metro’s. It’s been shown over and over again that bike share success hinges on how big the system is. Why is everyone in LA county fragmenting the system? It’s already failing before it even starts!

Karen….No I don’t mean that.

I’m glad you have the luxury to bike all over town all the time. Must be nice. But I’m not in the position you’re in so I have to use a car to get where I need to go….sometimes very far away or with another person and stuff. I’m also afraid to bike around the city with all those cars around me.

But you seem fearless and a free spirit….good for you…..I agree with you about safety. We all need to be safe.

I hope you get all the bike lanes you need.

It seems that in spite of the bickering everyone wants to see more (and better, safer, smarter) bike lanes. I’m glad we all agree!
Btw, I would wager that the success of this bike sharing program largely depends on creating those lanes. Nobody will bike to Hollywood and Highland unless we create a reasonably appealing and safe route to do so. Even car traffic would ultimately benefit.

Perhaps you’ll never get it, Manny, if you’re offering to drive me. I don’t want to be in a polluting vehicle. I love the exercise, love not polluting, and love the open air. I would just much rather not risk dying/ have a safe space on the road. I would love to be able to see the set of mountains behind Griffith Observatory from Runyon every time I hike, not a layer of smog that hides them much of the time. I hate fracking and oil spills and coal mining, and want to minimize my contribution to all of that… Read more »

“But when there’s no bike lane, for your safety and for the safety of others, get off the bike and walk. NO BIG DEAL.” Seriously? I’m supposed to walk 15 miles round trip to volunteer? And people should walk that far to work every day?! Do you tell that to drivers, too? Or would you rather we drive and pollute the air you breathe while contributing to demand for fossil fuels and all the related problems? Walking is not an efficient means of transportation for longer distances. Personally, I almost never ride on the sidewalk (the west side of LaBrea… Read more »

wow Karen, that was some long essay…..I get it, we get it….riding a bicycle is dangerous and can be more dangerous when there are no bike lanes. That’s why I don’t ride a bicycle in the city, bike lane or no bike lane. But believe it or not there are plenty of people that DON’T ride bikes…..because they don’t want to, or they aren’t capable, or don’t have the luxury of time, or they prefer taking a long walk, or they would rather drive. The bicycle lobby should stop trying to muscle their way into the safe pedestrian territory. Pedestrians… Read more »

I don’t own a bike and don’t bike at all. I walk or use public transportation everywhere. And I tend to focus a lot on pedestrian safety, encouraging more walking and more walking paths, sidewalks, crosswalks, etc in our city. But to those taking an extremist position demanding “pedestrians first” in a way suggesting they have some weird private vendetta or personal little war against cyclists — show me any data demonstrating the rate of injury and death caused to pedestrians by bicycles on sidewalks. The traffic deaths and injuries of cyclists due to vehicular traffic, and the anti-cyclist mentality… Read more »

Whoaaaaaa! Please chill your rant. Numerous folks can pop up with all their special incidents but in the end it’s a rant. What Manny and others are primarily advocating is reasonable behavior and reasonable awareness of the space around them. Stressing those attributes in a bike/pedestrian/car safety campaign may be the way to go. One would think that cyclists would want to find safe routes of travel even if it takes them a block or two out of the way. Because they don’t, doesn’t make it intelligent to use the sidewalk when traffic gets tight or heavy. Wouldn’t you rather… Read more »