The latest in what appears to be an ongoing series of robberies in West Hollywood occurred this afternoon on Flores Street south of Melrose Avenue. 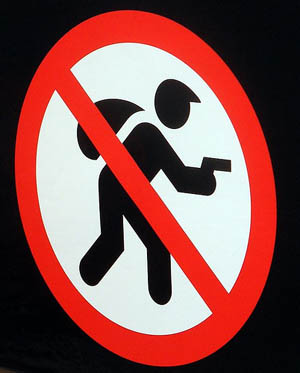 Sgt. Dave Valentine of the West Hollywood Sheriff’s Station said a man was sitting in his car in a driveway on Flores around 2:45 p.m. when another man approached. The man pounded on his window and demanded that the victim surrender his watch, a bracelet and his cell phone. Then the robber, who was African-American, jumped in another car with a companion and left the scene.

Another similar robbery occurred at 1250 N. Kings Rd., just south of Santa Monica Blvd., on Sunday. On Nov. 24 a group of three men, one carrying a handgun, approached a man walking his dog in the 7600 block of Hampton Ave. but did not steal anything. On Nov. 22 five men approached a man walking down the sidewalk on De Longpre Avenue near Flores and accosted him and stole his mobile phone. On Nov. 15 a man walking on Romaine Street near Gardner encountered six men, one of whom stole his cell phone. In several of those incidents the men involved were African-American, although it isn’t clear whether the same men were involved in each.

Lt. David Smith of the West Hollywood Sheriff’s Station cautioned residents to be very aware of their surrounding when they were out walking at night. If you see a group of people sitting in a car or someone approaching you, it’s best to walk away immediately, Smith said.

Very true. I have already contacted Sgt. Klaus at the Weho Sheriff. They arrange for extra patrols. These two guys are getting too bold. We are also having a meeting with the city on Neighborhood Watch on January 27th at 1140 N Kings Rd 7:00 PM. We encourage as many people as can attend to help set up Crime Watch on our street.

So, it’s pretty clear that this doesn’t only happen to people who are distracted by texting or talking on the phone.

I am with the Kings road neighborhood watch. We are trying to recruit all neighborhoods to join in. We need signage and I am working with the Sheriff to add extra patrols. These guys are a menace and must be stopped. Hopefully someone will get their plates. Pepper spray is a good idea but you should take the class at the sheriff. We’re scheduling a meeting January for more community watch. I will post the date time and location

Time for a TASK FORCE City Hall and Sheriffs Dept!!!!! What ARE you doing about this crime wave????

This is Getting Out of Control! I cannot believe that in my neighborhood and 10 blocks either direction people are getting jumped ambushed and robbed with people brandishing guns and multiple people attacking and victims being outnumbered and attachers and robbers fleeing the city limits within minutes! I guess everyone assumes that if you live in west Hollywood you must have money or are in an upper socioeconomic demographic! Sick of this always happening! I am bringing this up to the east side task force and the city council. Enough is Enough!!!!!!

1250 N Kings is just south of Fountain and north of SM Blvd. The streets of Weho have become mean streets! This gang is predatory, sophisticated, and strikes with impunity. The sheriff is very responsive but only after the muggings I don’t leave the house without pepper spray and other weapons. Living in Weho I expect to be robbed and assaulted.