The crackdown on pick pocketing at The Abbey continues with two arrests on Saturday by West Hollywood sheriff’s deputies. 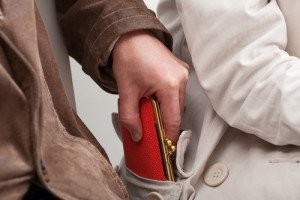 Lt. David Smith said one person was charged with robbery after resisting an officer and the other with grand theft. Smith said deputies searching a vehicle nearby found a total of 11 cell phones and stolen personal IDs.

The Abbey, West Hollywood’s best-known gay bar and restaurant, has worked with deputies to step up its surveillance of possible pickpockets after Smith disclosed 159 thefts had been reported from the beginning of 2015 through the middle of October.

Last month security personnel at The Abbey detained a man on a Saturday night and discovered four cell phones in his possession. Sheriff’s deputies arrested him and charged him with grand theft of personal property. The man was identified as Alejandro Martinez, 32.

Smith said it is important for patrons of any crowded bar or nightclub to be aware of their surroundings and keep personal items such as money, wallets, keys and cell phones close.

SERIOUS TIP TO EVERYONE – on GMA or some talk show, a ‘professional’ said the easiest way to PREVENT being the victim of Pick Pockets (SIMPLE):

Put a Rubber Band or Two around your wallet if your are going to put it in a pocket (pant or jacket).

The added friction is enough to prevent a trained pick pocket (who will lets say accidentally bump into you, and in you surprise, slip your wallet out).

This stops most. Saw the story and the example in Times Square.

West Hollywood is not a safe place.