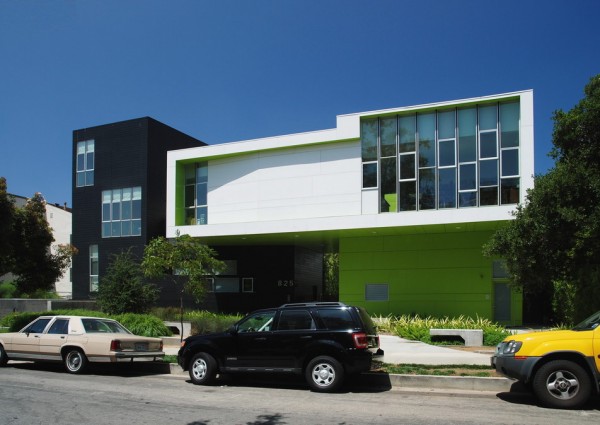 “Architectural Resistance” was the name of a 2003 campaign by the operator of the Schindler House to convince a developer to build something other than condos next door. The operator, the Vienna-based MAK Center for Art and Architecture, asked architects worldwide for alternate designs to the developer’s planned condos – an effort that contained more than a few oddities.

• For starters, the MAK Center didn’t own the property for which it was soliciting proposals. But that didn’t seem to bother its Vienna-based chief executive officer, Peter Noever. He challenged the right of the developer to build condos on his own property that met all legal requirements.

“The site is part of the architecture (of the Schindler House). It is very ignorant to say, just by law, that this is your property and you can do with it what you want. Our idea is to take possession of the site by ideas” from leading architects, Noever told the news media.

• The solicitation had insulted the developer – Richard Loring of the Habitat Group – and his acclaimed architect – Lorcan O’Herlihy. Calling them “ignorant” didn’t help get their buy-in to the MAK Center’s position either. So the MAK Center CEO went a step further by telling The New York Times, “What we are doing is politically not correct, because we are mixing in other people’s business. But in reality it is the developers who are interfering in something they don’t understand or respect.”

• O’Herlihy’s design incorporated features that addressed the MAK Center’s major concerns. The proposed condos were kept to two stories along the Schindler House’s property line for example, so that they couldn’t be seen by the famous neighbor next door. West Hollywood’s zoning code allowed up to four stories, or 45 feet in height.

By law, the developer could have constructed a building with 23 condos, but reduced the number to 19 for a smaller footprint in order to be respectful of the integrity of the Schindler House. But Noever was not appeased.

• All of this raised a question about what the MAK Center really wanted, the Los Angeles Times noted in a 2004 article after the controversy had blown over. “What they were protesting was not the design but any development at all – they wanted a park,” the article states.

• Finally, and perhaps strangest of all, developer Loring told Metropolis magazine that Noever had placed MAK’s Los Angeles staff in the uncomfortable position “of having to appear to disapprove of what is, to all appearances, a carefully considered approach to the site. They were not only blindsided (by Noever), they were forced to take a position they didn’t believe in.”

The chain of raucous events was set off when the Habitat Group – Los Angeles purchased property at 825 N. Kings Rd. with plans to build 23 condos. The MAK Center, led by hard-charging CEO Noever, took it as an invasion of the Schindler House’s space and immediately warned that a neighboring project could “literally dwarf” its historic studio-residence at 835 N. Kings Rd.

He had reason to be concerned, no doubt. Noever claimed the addition of another multi-story building to the south would reduce the Schindler House to a museum piece sandwiched between two neighbors, robbed of its essential light and open spirit. High-rise condos already overlooked the Schindler House on its north side.

Encroachment wasn’t the only threat it faced in 2002. The World Monuments Fund (WMF), an international preservationist group based in New York City, already had placed the Schindler House on its 2002 “watch list” of historic architecture at risk from either political or economic forces. The New York Times was more specific when it reported, “Because of structural deterioration at the Schindler House, the WMF placed it on its list of 100 most endangered sites in 2002.”

A Modernist Design in Schindler’s Tradition

Developer Loring was a contractor with a master’s degree in architecture and a record for building some of Los Angeles’ finest contemporary houses.

He hired Culver City architect Lorcan O’Herlihy to design the Habitat 825 condos, a choice that should have given opponents a certain comfort level that the condos’ design would respect the Schindler House’s integrity. O’Herlihy got his start with I.M. Pei in New York City and subsequently established himself in L.A. as an acclaimed modernist practioner in the mold of Schindler and Richard Neutra. 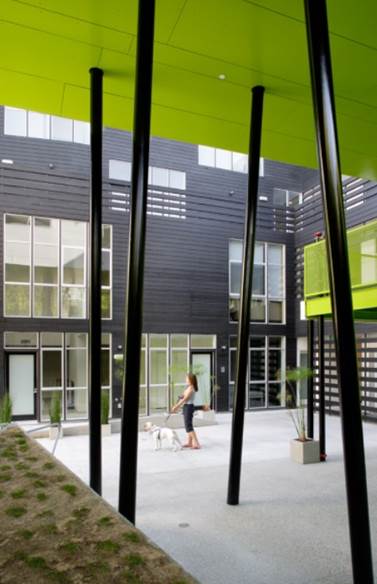 Sure enough, O’Herlihy produced a design that Loring described as “a concerted effort to defer to Schindler’s exquisitely scaled structure,” according to Metropolis magazine. “The sleekly minimalist scheme visibly reduces the impact of the 19-unit development … with a restrained layout that consumes a mere 60 percent of the allowable building envelope, rising to just below the bamboo, a 20- to 30-foot planting that flanks the south side of the Schindler House’s property line.”

O’Herlihy, providing the specifics, noted that he and Loring kept the condos to two stories on the north side expressly to avoid casting shadows onto the Schindler House’s property. West Hollywood’s zoning code allowed up to four stories, or 45 feet. The number of units – reduced from 23 to 19 – was another major concession that respected the integrity of the shrine next door to modernist residential architecture.

Another Schindler-like feature was a courtyard layout without corridors between units, allowing a piece of the outdoors to filter indoors unmediated to reduce the feeling of density. Taken as a whole, O’Herlihy said the design “draws inspiration from Schindler in developing new forms of contemporary lifestyle through the use of light, materials, color and common open space.”

The Mouth that Roared

But no good deed goes unpunished, as the saying goes. Opponents were not appeased, and an international competition for alternate designs got underway. Noever said the center hoped to force a rethinking of the way in which the Schindler House occupies its spot on North Kings Road, and by extension, in the city at large. The solicitation, he said, would generate “alternate visions designed to preserve the integrity of the landmark home.”

He dubbed his invitation a “non-competition” since none of the designs was likely to be built – the MAK itself had no control over the adjacent property. Noever wanted the solicitation to open a public debate about architecture and social values. O’Herlihy was invited but decided to be a non-participant in the non-competition.

Developer Loring called the MAK Center’s objections “abstract” and “theoretical,” adding, “We’re a little disappointed. We’re being portrayed as threatening the Schindler House, but it’s the opposite. Whatever we do is respectful.”

“Peter Noever has been issuing press releases saying that we’re putting up a four-story box that will create a canyon effect, but in fact we are doing something quite different,” said Loring, who paid $2.82 million for the adjacent property. “In the end it’s turned out to be quite ridiculous, because none of the schemes people came up with could exist in the real world.”

All designs submitted by 21 architects internationally were turned into a book, “Architectural Resistance: Contemporary Artists Face Schindler Today,” published by Hatje Gantz. It was available only at the Schindler House bookstore in late 2003 before being distributed to architectural bookstores nationwide in 2004. The book is out of print currently.

Thanks to a Los Angeles Times article published in December 2003, we have Loring’s assessment of the book. “Developer Loring has not seen the book but offers this review: ‘It’s a book of nothing’.” He continued, ‘The whole thing is almost obscene,’ describing opponents as ‘jumping around like a bunch of little monkeys with their stupid projects.’

Noever resigned as artistic director and chief executive officer of the MAK Center in 2011, “In what amounts to a very scandalous situation involving public funds,” Archinet News reported but didn’t provide any other information.

For all the folderol, the Loring-O’Herlihy Habitat 825 proposal glided through city reviews in 2004, collecting unanimous approvals from the planning commission and the City Council. O’Herlihy’s design likewise received top industry honors and the applause of architecture critics.

• Residential Architect magazine named Habitat 825 its “2009 Project of the Year,” stating, “The finished building shows respect for the experimental spirit – as well as the physical space of its iconic neighbor.”

• The American Institute of Architects presented a 2008 Housing Award for Multi-Family Housing to Lorcan O’Herlihy Architects and Habitat 825. This award recognizes high- and low-density projects for both architectural design and contextual integration, including open space, transportation options and community livability.

• ArchNewsNow said in a 2005 item, “Chances are that in another 82 years, there would be howls of protest should new plans for the neighborhood include demolishing and replacing Habitat 825 – which by that time, might itself be considered a treasured example of 21st century Modernism.”

• The “Los Angeles Times” called Habitat 825 one of the most significant projects of 2007, the year construction completed, and a rich symbol of “a city struggling to escape its adolescence and define its early adulthood.”

• Richard Koshalek, the president of the Art Center College of Design in Pasadena, praised it as “an experiment that’s critically important in L.A.” and that has “very original ideas about working with density” at a time when neighborhoods like West Hollywood are becoming denser by the year.

I recall local opposition- from WEHONA and other groups as being less upset when the plan went down to two stories from four on the north facade of 825. Four would have overpowered the Schindler House. So, win, win. Interestingly, with the passage of time the Hollywood Regency manor on the lot Loring built on could perhaps receive an historic designation.
Ah, time.

Funny anicdote, 20 years ago, I was condo shopping and my agent showed me the top floor unit next to the shindler house pictured.

It’s wan’t for me, but to “push me to buy” my agent said “BUT IT’s great, the Schindler House is “Historic” so “THERE WILL NEVER BE A CODO GOING UP AND BLOCKING YOUR VIEW – FOREVER”.

It didn’t have a walk in closet, so I was halfway out the door on that house hunt.

“instead of affordable housing”?……lol, I don’t think so Mike.

Perhaps it’s time for the over developed Kings Rd. to fund the restoration of the Schindler’s House thru incentives from future developers instead of affordable housing on both Kings Rd. and Sweetzer Ave. Once that is paid for perhaps other projects can be put forward to save other wonderful examples of architecture in West Hollywood.

If Loring or O’Herlihy made a contribution it doesn’t show. Unfortunately the Schindler House would now be considered a teardown if it weren’t what it is.

Curious to know if Richard Loring or Lorcan O’ Herlihy at any time made contributions to WFS to reverse the structural deterioration of a building they so revered.