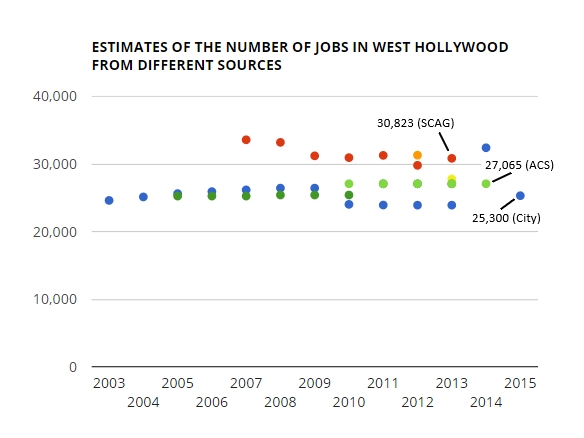 West Hollywood’s workforce has at least 25,000 people and perhaps as many as 31,000. That’s according to a new analysis of government data by WeHo by the Numbers. The wide range is due to the five sources used, each with its own methodology and estimate. A similar range can be seen in job estimates for neighboring cities. 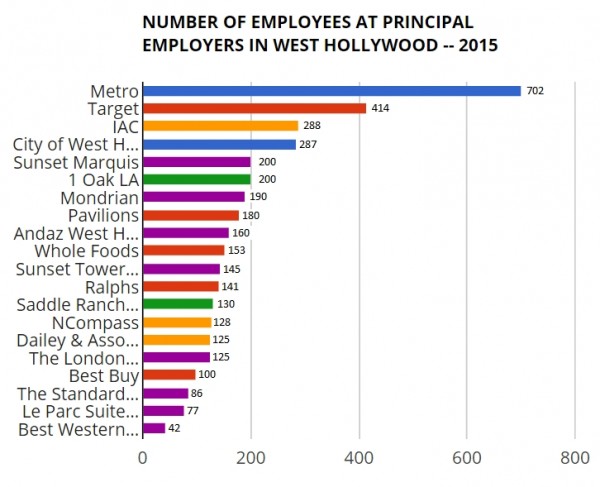 The other estimates come from three different Census Bureau data sources. They also fall roughly into the 25,000 to 31,000 range. For example, the American Community Survey’s (ACS’s) five-year 2010-2014 estimate was that 27,065 people were working in West Hollywood. In the accompanying chart, those numbers are represented by green dots, while the city’s dots are blue and SCAG’s are red. The orange and yellow dots are for the other Census Bureau data sources.

The city’s newly released report also includes information about where some of these people work. The updated list of “principal employers” includes government entities, retailers, media/marketing companies, restaurants/clubs, and hotels. They had anywhere from 42 to 702 employees in West Hollywood in 2015.

The biggest employer on the list is Metro. They have a bus garage and over 700 employees here, including drivers and mechanics. Also in the top five are Target (retail), IAC (an internet media company), the city government (with 287 employees/216 full-time equivalents) and the Sunset Marquis (hotel). The House of Blues was in the top five but is now closed. It has been omitted from the accompanying chart.

Together, these organizations employ about 15% of the people who work in West Hollywood. Another 10%-plus work at home. That means 75% of workers, roughly 20,000 people, work elsewhere in the city.

For more information about job growth, job estimates and data sources, please see the Weho by the Numbers article: How many people work in West Hollywood and where?

@Caboom1965- Sushi Roku and Cedars Sinai are not in West Hollywood.

But it is difficult to believe that the other 75% of people who work in West Hollywood are all employed by companies with fewer than 42 employees.

stop taking bows, … you didn’t build those businesses or create those jobs ! 🙂

Hundreds of small businesses ignored as well as the sheriff, local schools, and major employers in the red building say Grindr, so this is all a nonsense list of garbage to me that spends more time listing hotels, supermarkets and a few stores staff and ignores everybody else.

Where is Cedars, or the Innovative Dining group (Sushi Roku/Boa/Katana)

Finally a study that indicates the MTA is not the bad guy but instead the largest employer in West Hollywood. While many don’t like the idea of a bus operating division within West Hollywood employees of the MTA spend money and contribute to the economy in our small city. And compared to most operating divisions other than the signs outside it’s next to impossible to identify what type of business is located at 8800 Santa Monica Bl. and observe the buses parked in the yard. West Hollywood grew up around the division which at one time also included the land… Read more »