In a communication with Tory Berger, a member of West Hollywood’s Public Safety Commission,  the U.S. Postal Service says it has replaced more than 75 master locks in the 90069 Zip Zone over two weeks. No information is available as to whether locks are being replaced in the city’s 90046 Zip Zone. 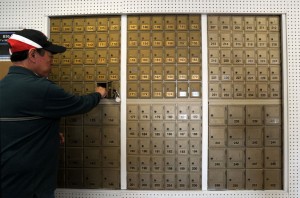 The U.S. Postal Service has come under criticism for its poor response to a rash of break-ins in which thieves use copies of USPS master keys to enter apartment and condo buildings and open the panels covering individual mailboxes. WEHOville has posted several videos provided by building managers that show various people stealing mail. The Postal Service has been reluctant to offer WEHOville any information about the number of mailboxes broken into, the location of the buildings or the number of locks it has replaced. The mailbox break-ins have been a major public issue, and Mayor Lindsey Horvath announced in December that the USPS would begin replacing master locks.

“We have been working with the Postal Service’s maintenance department to replace Postal Service locks that have been compromised with high security locks,” said Angela Ferris, acting team in the Leader-Mail Theft Prevention unit of the U.S. Postal Inspection Service, in an email to another West Hollywood resident. “Currently, high security locks are also being installed in adjacent zip codes as mail theft incidents occur. However, we are continuing to help their maintenance department with the systematic replacement of converting all locks to high security locks throughout Los Angeles. In addition to installing high security locks, we have assisted with developing and the installation process of approximately 75 modified collection boxes throughout Los Angeles to also help prevent mail theft.”

WEHOville has chronicled roughly 30 mailbox break-ins in West Hollywood in recent months, thanks to reports from readers. Mayor Lindsey Horvath has contacted the city’s federal legislators and asked them to press the Postal Service to respond. But given the lack of information that the USPS is willing to provide to WEHOville or residents at two community meetings, a number of things remain unclear:

— Exactly how many apartment or condo buildings in West Hollywood have been broken into in the past six months by thieves using USPS master keys?

— How do thieves get their hands on these keys, which are supposed to be closely guarded by postal employees? Faced with criticism that the Postal Service may not be guarding the keys, a Postal Service spokesman told WEHOville that thieves can create master keys without working from originals. He declined to explain how that could happen.

— What plan of action has the U.S. Postal Service developed, if any, for replacing master locks? Will it focus on buildings that already have been broken into? Will it focus on particular geographic areas of the city? What percentage of postal locks in West Hollywood does it plan to replace? And what is its deadline for doing that?

— Why does the U.S. Postal Service not communicate with residents of buildings whose master locks it has replaced?

Ferris, in a community meeting on Doheny Drive recently, said mailbox break-ins were a bigger issue in Los Angeles than anywhere else in the country.

EDITOR’S NOTE:  An earlier version of this story erred in stating that information about about the number of master locks that have been replaced was sent to local Neighborhood Watch leaders by Laura Manukian, the neighborhood services coordinator for West Hollywood’s Public Safety Department.  That information was provided to Tory Berger of the city’s Public Safety Commission.  The story has been changed to correct that error.