UPDATE:  Artyom Gasparyan’s arraignment on capital murder and other charges, scheduled for today, was postponed. He remains in prison, held without bail.

A man suspected in a violent monthlong crime spree in communities including West Hollywood is scheduled to be arraigned today on capital murder and other charges.

Artyom Gasparyan, 32, had been hospitalized following a Jan. 4 wrong-way crash on the Golden State (5) Freeway in Sun Valley that ended with him being shot by police. 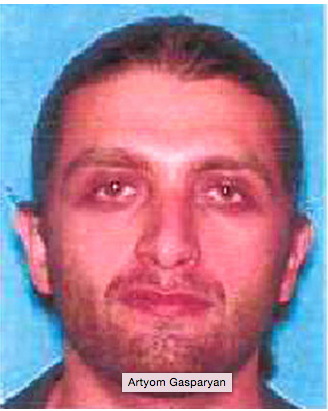 Gasparyan — who was already charged with attempted murder and assault in two other cases — is now facing two dozen additional counts, including murder, for crimes he allegedly committed between Dec. 6 and Jan. 4, according to the L.A. County District Attorney’s Office.

The murder charge includes the special circumstance allegation of an intentional shooting from a motor vehicle, which will make Gasparyan eligible for a death sentence if convicted. Prosecutors will decide later whether to pursue the death penalty against him.

Gasparyan is also being charged with 10 more counts of attempted murder, seven counts of second-degree robbery, two counts each of carjacking and fleeing police while driving recklessly and one count each of hit-and-run driving resulting in injury and possession of a firearm by a felon. Among the incidents was the alleged shooting by Gasparyan of an employee of Bossa Nova restaurant making a delivery on North Kings Road in December.

Los Angeles police Chief Charlie Beck said in January that Gasparyan was suspected of being involved in a string of crimes stretching from Burbank to Long Beach to West Hollywood to Carson and Panorama City.

“He’s been involved in several carjackings, several armed robberies, at least one homicide, at least four attempted homicides and is a very, very dangerous individual. I have had well over a hundred detectives and several hundred line officers assigned specifically to capture him over the past week,” the police chief said then.

When officers spotted him at an auto-body shop in the San Fernando Valley on Jan. 4, a chase ensued, ending with the crash on the northbound 5 Freeway near Glenoaks Boulevard in Sun Valley.

Gasparyan jumped out of his car and tried to run, but was wounded by officers, authorities said.

Paramedics treated several people — including children — who were in the vehicle that was struck by the suspect.

Authorities said Gasparyan had also been tied to another police pursuit that began on New Year’s Day near the Harbor Gateway area and ended when a second suspect, Daniel Ramirez, shot himself in the head at a Long Beach home in the 3300 block of Daisy Avenue after shooting two men and stabbing another.

Ramirez, who died of his wounds, was identified by police as Gasparyan’s accomplice.

The New Year’s Day pursuit through the Carson area began when Gasparyan and Ramirez allegedly stole a Volkswagen Passat.

During the chase, police said one of the suspects fired at the occupants of an orange Dodge Durango that pulled over when the driver heard the patrol car’s sirens. They were not injured.

Ramirez eventually ran into the house on Daisy Avenue, where he fought with a man inside the house and stabbed him in the face with a knife from the kitchen. The man and a younger son, who suffered injuries to his hands, were able to flee.

Ramirez held the remaining two sons in the house as hostages, eventually shooting them both, police said. Both survived. As police approached the home, Ramirez shot himself in the head, authorities said.

Police said Gasparyan’s alleged crimes also include a Dec. 9 shooting in Burbank, where a 67-year-old man was shot multiple times at his home and a 33- year-old gardener was wounded.

On Dec. 30, Gasparyan allegedly was involved in the shooting death of a 37-year-old man near Van Nuys Boulevard and Plummer Street that was initially reported as a road rage incident. Officers found the victim lying near a car and took him to a hospital, where he was pronounced dead.

Police said in January that they also believe Gasparyan is linked to shootings in the Panorama City area on Dec. 30 that left three people wounded.

A big thank you to the police.