The twice-monthly West Hollywood City Council meeting provides an important forum for residents to raise issues before their elected officials and one another and for members of the City Council to debate issues before enacting policies that affect all of us. 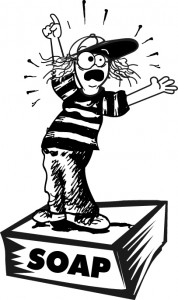 But some of those attending City Council meetings apparently don’t understand that they are a forum for all of us. People who want to scream and curse, rant about items not on the Council agenda and engage in vitriolic and profane attacks on Council members and one another interfere with those of us who want to engage in civilized discussion and debate. They effectively deny our freedom of speech. They need to be stopped.

At a previous Council meeting, City Attorney Mike Jenkins called out Ivy Bottini for her off-topic tirade about the settlement of the Ian Owens lawsuit. Jenkins was blasted by some of the Council’s regular attendees, who argued that Bottini’s reputation as an activist gave her a right to break the rules. Tonight Jenkins revealed that he had called Bottini to apologize for upsetting her, and to explain why he called her out for speaking off topic. Jenkins’ apology was considerate, but Bottini’s off-topic rant was not.

Neither was the profanity used by Scott Rice in his emotional condemnation tonight of Councilmember John Duran. Nor are the shouts by Jeanne Dobrin, the justifiably beloved 95-year-old (and somewhat deaf) West Hollywood resident, who must stop screaming at speakers to state what city they live in.

The city has standards for conduct at public meetings. They make clear that “Abusive, derogatory and slanderous language is inappropriate. ”

“Members of the audience shall not engage in disorderly or boisterous conduct, including the utterance of loud, threatening or abusive language, whistling, stamping of feet or other acts which disturb, disrupt, impede or otherwise render the orderly conduct of the City Council meeting unfeasible.

“Persons in the audience will refrain from creating, provoking or participating in any type of unwelcome physical contact.”

These are standards our mayor must strongly enforce to promote the civic engagement that West Hollywood needs more of.

As a resident and voter living in the City of West Hollywood; I am so proud of our progressive and inclusive values. Our Mayor, so eloquently states our city’s position, and I support Mayor Horvath for the leadership she gives to us all so unselfishly. She does not waiver in her call to disseminate hateful, harmful speech and actions that even rear in ugliness in our own city. The residents of West Hollywood are committed to her causes hear at home and nationally. I am so proud to live in West Hollywood and have the leadership of our Mayor; especially… Read more »

This will be one of my final comments with my moving to Palm Springs this week. Two of the best commentors here suggested my doing something I had thought of myself at Monday’s meeting. Other commitments prevented this, but I meant, after 16 glorious years in WeHo and specifically frequent and almost entirely excellent resident service from the city government and some specific members, I wanted to thank all of them for their great work. I have lived (and owned homes) in Chicago (various north side locations), New York (West Village and Tribeca) and WeHo, and nothing I previously experienced… Read more »

Randy, why then should the public not be allowed to speak AFTER every single public hearing and AFTER every single decision made? If so, no business will ever get done and the meetings will go on for 6 hours on a regular basis. We don’t need to give EGOS, and a desire by some for attention, even more opportunities to STEAL time from residents who have made an effort to attend a city council meeting so they may speak (at the appropriate time) about and issue on the agenda that is important to them. I’m confident that all the opportunities… Read more »

Manny, I understand. I am not arguing that she should have used the time that was allotted to Park Phase 2. I was suggesting a solution that allows members of the public to have another opportunity to speak after hearing council comments. Instead of having to wait until the very end of a 5 or 6 hour meeting. In this case, comments by D’Amico and Duran clarified the situation a bit, and people wanted a chance to respond.

Randy, the problem with your argument is that I (also resident) was there to hear the business of the Park Phase 2 project. I had heard enough about the topic she was ranting about and she was wasting my time and the time of other RESIDENTS who had moved on to other important business. RESIDENTS at that point of the meeting had been waiting patiently to speak ON THE TOPIC AT HAND.

I hope her conversation with the City Attorney made her understand how it works and how not to be so selfish and rude to others.

I like the off color remarks and heartfelt rants. I remember Stan Lothridge and his constant comments. C’mon folks drama divas in Weho? How is THAT possible? I do, however, think the F bomb is still inappropriate. I’m surprised I still find that word shocking, but I do, in this context especially. Otherwise, let the people speak their mind! Politicians need rhino skin: that’s politics, although it couldn’t have been pleasant for John Duran to have it come up over and over again. Crikey–I almost expected Garcetti to reference it!

I don’t condone profane behavior, nor do I condone talking off subject. In Ivy’s case, the Council members remarks came after initial public comment, which in itself, was only limited to 20 minutes. She was responding directly to D’Amico’s comments. Her next valid opportunity was to wait hours, until after the meeting. I think they should consider giving the members of the public a little longer than 20 minutes. Especially when there are issues going on, such as this one, which weren’t officially part of the meeting agenda, and can only officially be discussed during public comment. After getting comments… Read more »

I’m not a frequent CC meeting watcher but I was incredulous at seeing so many people go to the podium to defend the out-of-line behavior of a speaker who was obviously in an agitated state & wanted to be confrontational. The incident was an act of disrespect toward the CC & those in attendance, & certainly not an act of disrespect by the CC or the City Attorney to the speaker. It’s not rocket science, it’s common civility – regardless of all the scattered emotional feelings & opinions, everyone is expected to respect the forum & abide by the rules.… Read more »

@Steve Martin….This elitist speakers and use of profanity is NOT a “symptom of larger problems in our city”…..Those speakers are simply inappropriate, disrespectful and shameful.

This bad behavior is unacceptable, indecent and puts a black eye on democracy.

Call it what it is Steve!

Sure there are plenty of profane, off topic and self serving statements being made during the Council meetings but not all of those comments are coming from the public. The City and its’ body politic are going through some rough times right now and many folks are angry and emotional. Can’t say I blame them. While off topic comments are not helpful to the conduct of the meeting, this is hardly an issue that warrants anything other than a polite request to offenders to respect the process as other speakers have done. Perhaps we should view these comments as a… Read more »

Inappropriate outbursts and speaking out of turn must be better managed by the Mayor. The City Attorney should not have had to step in to cut off the speaker who was ranting off topic. But I’m glad he did and he did not need to apologize for it. That speaker knows better and could have made her opinion heard at the appropriate “general public comment” period of the meeting. She has no special rights and is not entitled to more time than the rest of us. It was rude, self-serving, disrespectful and disrupted the important city business at hand. She… Read more »

At my age, I can’t afford to ‘miss opportunities.’ Actually, I dare say that none of us, at any age can afford to miss an opportunity to share or listen to valuable input because that opportunity may never come again, Wasting time with hyperbole’ and ranting is best left for the comment columns in Wehoville or best done through email or, perhaps, one on one discussions, as long as they don’t turn violent. Let’s not waste each other’s time to make our opinions known to the council. Nothing blurs one’s meaning more that profanity and increased decibels. It’s time for… Read more »