West Hollywood Airbnb listings grew an estimated 24 percent over seven months, while “active” listings grew 32 percent. That’s according to a new analysis by WeHo By the Numbers of data from a third-party website, Inside Airbnb. 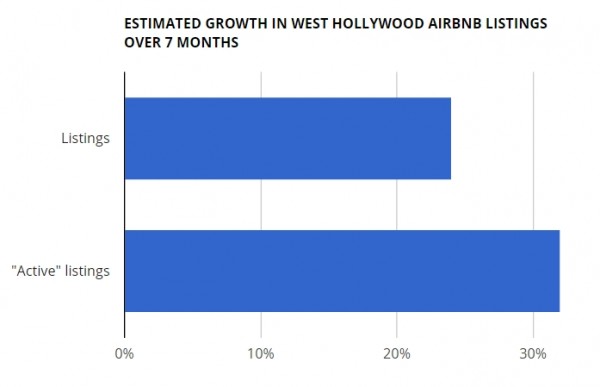 There were 761 West Hollywood listings at the beginning of January versus 615 in late May of last year. The net growth of 146 came from more than 400 new listings, partially offset by over 250 deleted listings. Listings without recent activity were more likely to be deleted.
These counts are based on physical locations within the city’s boundaries. The numbers would be higher if they included every listing with “West Hollywood” in the description. Sometimes West Hollywood-adjacent rentals are described as being in West Hollywood.

The analysis also identified a smaller set of “active” listings. Any listing that got a review in the prior six months was counted as active. By that definition, there were 475 active listings at the beginning of January. Seventy percent offered a whole home. The rest offered a room. Thirty-three percent were offered by hosts with more than listing.

For Los Angeles County as a whole, total Airbnb listings increased 42% during the same seven-month period, twice the growth rate in West Hollywood. The Los Angeles Times recently reported that Airbnb is becoming more of a concern for the hotel industry. There is evidence that Airbnb may be affecting hotel room rates in areas with many Airbnb listings, such as Santa Monica.

In July, the West Hollywood City Council passed an ordinance to “to clarify the existing prohibition of Short Term Rentals.” The ordinance took effect in October. City staff is expected to return to the Council with a status update and some additional information in the next couple of months.

For more information, please see the WeHo by the Numbers article, How big is Airbnb in West Hollywood?

Leasing or renting homes has been on those tv informercials since we were all kids. During the financial crisis many of these homes sat empty bringing down property values and inviting transients. Short sales brought down values in neighborhoods and then caused others to also lose.. ‘short sales’ were the buzzword of the day. Fixing the houses up and keeping them in good condition is a benefit to the whole community.. and tourists – add revenue to the local businesses facing struggles in the commercial areas. And there is a difference between one person owning 14 houses and one person… Read more »

I am sure that short-term renters are more prone to being noisy, but that must be the exception, and not the rule. I’ve never had a problem with anyone I’ve rented to. On top of that, a landlord could lease a home or duplex unit to a very disrespectful, noisy tenant (many of which, I’ve had the displeasure of living next to), and the neighbors are stuck with that person around them for an extended period of time. I don’t think this is a strong enough argument to ban AirBnB rentals. As previously stated, I think it should be up… Read more »

I think the interesting thing is the rise of AirB&B is in direct correlation to the astronomical housing prices of Southern CA. Not only is it absurd to try to own or rent anything here…but visitors can’t afford to pay the high cost of hotels. These visitors are used to $80 a night hotels in traveling. You come to SoCal and its impossible to find anything under $250. Somewhere in the late 90s/early 00’s…the idea of property went from a long term investment to a short term investment. You have foreigners paying cash for homes, real estate companies owning real… Read more »

Ethics, integrity and responsibility have become archaic terms now only located in the dictionary and no longer essential in the fabric of everyone’s lives. Our particular society and democratic way of life have been co-opted by folks that believe they are free to do as they please without responsibility and respect for others.

I’ve often thought our pledge of allegiance should be amended to read “with Liberty, Justice and Respect for all”.

Jonathan Simmons: There have been long festering problems in the city in locations other than the Chamberlain. In the case of the IAJC Temple Neman Hall, used as a nonstop party facility, the neighborhood got very organized and worked with the city on many levels to find a solution. One eventually resulted but not until after the city was sued as a result of uninformed votes by two council members that served to enable the nuisance. The point is, complaints to the choir and barking at the council during meetings go into thin air. If you want action it’s best… Read more »

On my block in WeHoWest there are 5 illegal short-term vacation rentals going for as much as 750 bucks per night. On an adjoining street one occasional illegal vacation rental gets 1500 bucks a night. After much protest, the City received promise from one owner on my block to stop this practice. Monitoring these rental sites shows that violators are savvy, placing units on and off, playing cat & mouse with anyone attempting to regulate. One unit on my block explicitly warned visitors not to say they were visiting except as “guests” of the owner’s family. These are not “the… Read more »

WOW! You really aren’t very “savvy” about either what the people who own/rent property and have the same rights to use/rent/sublet or air BnB AS ANYONE ELSE. This entire ISSUE and the article is and “attempt” to “be Savvy” by the ongoing charade of action “by City Hall” which appear to pinpoint on what is the problem really bothering weho residents, then coming out ahead of the issue, and, like this article discusses, BLAMES and IS TAKING ACTION (or more action apparently, since their first attempt to write a law/ordinance for weho only, to make Air BnB illegal/impermissible for Owners… Read more »

Hey Allegra 🙂 Sorry to hear about the “tourist noise”. I can relate (actually, past tense… I finally refused to get annoyed by ALL KINDS OF noise) The Chamberlain Hotel brings to me in my home (condo) as well as the really dangerous overall safety in the whole westknoll Traffic Circle. The worst contributor is the City Ignoring/allowing Beverly Hills Cab Co to use regulsr weho permitted street parking AS A TAXI WAITING zone. There is a sitting empty cab 18 to 24 hourd a day. Siunds begnine, but that is a new additonal thing blocking the already TOO SMALL… Read more »

Last week an air bnb popped up at the apartments next door and somehow moved in a portable hot tub set up beside the pool. They shrieked and partied on for all hours for days until departing dragging their luggage behind. Something says the owner gave his blessing. So why not have these cheaper than hotels deals with no rules or supervision of any type? Because they can…..everybody wins except the neighbors. Shared economy I don’t think do, more like an overgrown dormatory for irresponsible types without the housemaster.

Next time we’ll be prepared and aim for a quick exit.

Randy and Larry…..I agree property owners should be able to do what they want with their property (as long as it’s legal) but they don’t the the right to do things at the expense of community.

Homeowners didn’t buy into residential neighborhoods to be subjected to transient visitors who have no obligation to the community. Thats why we have commercial areas and zones that accommodate the business of lodging.

@Randy, one problem with your argument is that it doesn’t address the situation Allegra describes, which has also been my experience with the airbnb – a single family residence – next door. Three nights ago we were awakened by a party at 4:30 that lasted until 6:30. Last night we were awakened at 2:30. Neighbors three houses away from the airbnb were also awakened. A renter or owner is more likely to be considerate of the neighbors than someone in a vacation rental. What I don’t understand is if short term rentals are illegal why isn’t the city trying to… Read more »

Why should a business, Airbnb be allowed to operate in the city and not follow the same rules and regulations as Hotels. Where is the firs safety, payroll, business taxes, Jobs hotels create, Security, environmental regulations etc. Airbnb can operate as long as it is over 30 days. Don’t forget Airbnb is taking housing stock off the market. Some of the market units are really a mini hotel since you have an operator renting multiple units.

Allegra that should never happen, those are rental units and the landlord can evict those tenants. If you watched the council meeting on this topic you might remember John Duran warning the public and talking about the legal cases he represented and how some people have lost their lease. It seems clear the owner is not present in the unit. And it clearly violates the spirit of his lease to rent out these rooms as vacation rentals when the owner/renter of the unit is not present.

Last night at 4am, the group of English people, staying at the Air B & B across the courtyard, came home & had a loud & lively conversation with howling laughter until 6AM when everything finally went quiet. They’re on English time. For the first time, in the several years this has been happening, I yelled out the window. They were so loud they didn’t hear. I just scared the cats. A few weeks ago, an Italian man stayed for a week & had loud & lively conversations on the phone day & night out on the balcony of another… Read more »