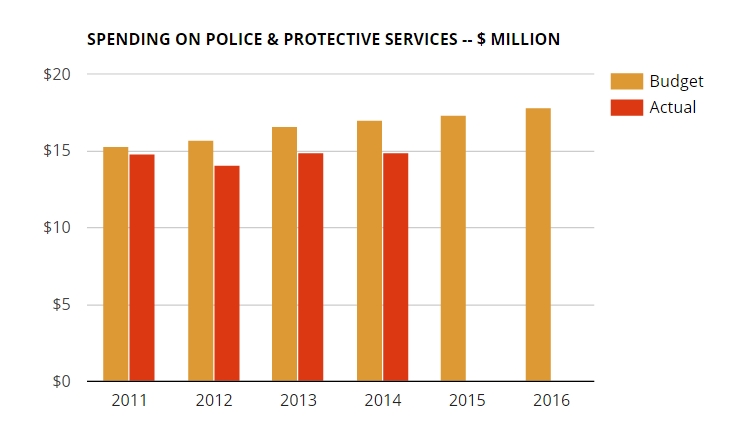 West Hollywood expects to spend over $17 million on policing this fiscal year, about 15% of the operating budget. That’s according to a new report by WeHo By the Numbers based on city data.

West Hollywood contracts with the Los Angeles County Sheriff’s Department to police the city. The budget includes $1.4 million for a team that works around the bars and clubs at night and $800,000 for special events. The allocation for the city’s security ambassadors, who are not police officers, is separate.

The budget for Police & Protective Services has grown 16% since 2011. In four recent years, 2011 through 2014, there was unspent money left over in the budget at the end of the year. During those years, actual spending on policing was fairly flat.

The City of West Hollywood believes it is “more economical to contract for these services” than to create a West Hollywood police department. If the city is correct, then some or all of the spending differences may be explained by savings from contracting rather than differences in the services provided.

For more information, please see the WeHo by the Numbers article, How much does West Hollywood spend on policing?

WOW what interesting insight I’m getting here, we have crime & terrorism because society is just so loving, and wait there’s more Hillary Clinton and Mark Zuckerberg are the ultimate examples of our overly loving society causing all this crime! Loving Hillary Clinton in her January 25, 1996 public speech in which Clinton had proposed a virtual war against youth of color, especially Black youth on behalf of Bill Clinton’s 1996 presidential re-election campaign: “We need to take these people on. They are often connected to big drug cartels. They are not just gangs of kids anymore. They are often… Read more »

yeah but maybe we should live the advice of hillary and facebook’s zuckerberg, and just love the criminals, show them love and understanding.
that’s how they think we could combat isis, and world terrorism.
i’m serious, they may be on to something.

Public Safety is not about statistics and a spread sheet. There is clearly an increase in crume and inadequate Public Safety Enforcement Officers to KEEP THE RESIDENTS SAFE. I have no actual insight, but perhaps it is not the amount spent, the budget or the comparison of weho to LA or any other large city. Weho is unique in so many ways, it is irresponsible to start addressing the current and future Publuc Safety Law Enfor ement. Who knows… maybe we could cut the “budget” by looking at where the system is failing the City and its residents. I see… Read more »