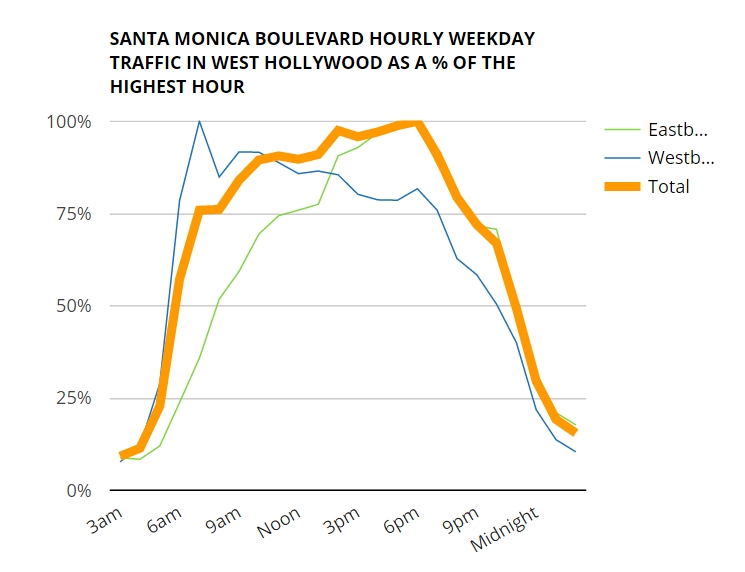 Weekday traffic on Santa Monica Boulevard in West Hollywood ranged from roughly 45,000 to 53,000 vehicles a day, including eastbound and westbound cars, trucks, motorcycles, and buses. That’s according to a new analysis by WeHo By the Numbers of 2010 city traffic counts and more recent numbers from the state.

Traffic on the boulevard varied depending on where in the city it was counted. On the Westside — Doheny to La Cienega — there were over 53,388 vehicles per day. That dropped to 46,468 in the center of the city, from La Cienega to Fairfax. There were 45,489 vehicles per day on the Eastside, from Fairfax to La Brea.

These Santa Monica Boulevard traffic volumes were similar to those seen in communities to the west (Beverly Hills, Century City, and Westwood). The volume decreased near the city of Santa Monica. Looking east from West Hollywood into Hollywood, the boulevard’s traffic volumes dropped below 40,000.

Comparing 2010 to 1988 — shortly after West Hollywood’s 1984 incorporation — Santa Monica Boulevard traffic grew fastest in the center of the city. It increased 66% over those 22 years or so. It also grew 30% on the Westside and 28% on the Eastside.

In many communities, the distribution of traffic throughout the day has a morning peak and an evening peak with lower traffic at other times. The pattern in West Hollywood is different. It can be seen in hourly numbers from a weekday in 2015. Traffic ramped up early in the morning and did not decline after the morning commute. Instead, it continued to grow, reaching a five-hour-long peak or plateau from 2 to 7 p.m. The highest hour was from 6 to 7 PM, but the volumes during the preceding four hours were almost the same.

Looking separately at westbound traffic, it peaked after 7 a.m., but did not drop below 75% of that peak until 8 p.m., 13 hours later. Westbound traffic was the bigger part of total traffic until 2 p.m.. Eastbound traffic grew throughout the morning and afternoon, peaking between 5 p.m. and 6 p.m. From 2 p.m. on, there was more eastbound than westbound traffic.

For more information, please see the WeHo by the Numbers article, How much Santa Monica Boulevard traffic is there in West Hollywood?

We can thank Waxman and Berman for our woes. Anyone old enough to remember the ’80’s when we were going to get a subway that would come through Beverly Hills? Suddenly they found Methane and it was all too dangerous to reach the Westside. Or more properly stated, too dangerous for “those people” to be able to traverse through Beverly Hills. Flash forward twenty years and when the traffic is to horrible to ignore they suddenly discovered a “way around” the methane problem. Can we make the City of Beverly Hills pay reparations?

The traffic along with the safety hazards that come with it all along Santa Monica Boulevard go to show that West Hollywood would benefit greatly by completely shutting Santa Monica Boulevard to private automobiles and, ONLY safe and Environmentally friendly PUBLIC Transportation! Leave the car at home for a healthier daily commute you would be surprised how many mean angry fat people you encounter stuck in traffic from Beverly Hills. Also the question begs to be asked How does your commute affect your mental health? The answers go a long way in explaining why people from Beverly Hills are so… Read more »

RR, all due respect, but if you work in Century City, why are you not taking the affordable, accessible 704 or 4 bus line? There are too many people that live along easily accessible transit lines (that don’t require a connection to another bus) that refuse to use them. People’s need to be in their cars only adds to this problem. I spent 3 years without a car in Los Angeles. Public transportation is clean, affordable, and for short distances such as that one, convenient (and probably doesn’t take much longer than driving). Not to mention you can kick back… Read more »

Why is 2010 the most recent stats Weho by the Numbers has? A lot has changed in the last 6 years, including two massive mixed use developments on the east side being completed. We should not be using any stats that are this old.

It’s easy to see why traffic decreases eastbound after La Cienega. Many drivers turn left to go up to Fountain Ave. and use Fountain as a faster route. Another problem is when the city re-constructed Santa Monica Bl. they put in curb extentions at many of the bus stops thereby blocking traffic in the right lane everywhere a bus makes a stop. Not only should these curb extension be removed but all major bus stops should be far side instead of near side like at Fairfax Av. After one waits for the bus to clear the stop then one must… Read more »

I use SM Blvd. every day to go to work in Century City. I have wanted to sound off about this for a long time. Lived in the area since 1999 and my commute home has gotten worse by the day. Morning for me is not bad if I leave before 7 am but I cringe when I have to take it home. I’ve tried alternative routes but SM Blvd. is most direct. I’m near Crescent Hts. The worst of my commute is Doheny to Crescent Hts. Could take up to 20 to 30 minutes just in that stretch alone… Read more »

Folks, it’s only going to get worse once all of the mixed-use developments are completed. Talk all you want about a subway but that’s in the very distant future, if it’s going to happen at all. I feel lucky that I work east of where I live. Having moved here in the late 70’s I have a vivid memory of how traffic was back in the 80’s. Oh, the memories.