Where would you like to find a bike? The City of West Hollywood wants to know.

To find out, it has launched a “suggest a location” feature on the city’s website that allows residents to suggest where they think public bicycles for shared use should be available. 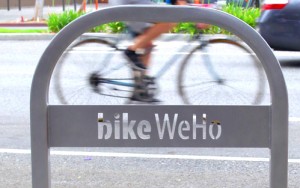 The city hopes to launch the bike sharing program this coming summer. It will make public bicycles available for shared use to people on a short-term basis. There are multiple benefits of bike share: it saves time and money, it reduces traffic congestion and it is improves the health of riders.

“Bringing bike share to West Hollywood means more residents and visitors will have a transportation option that’s also great for a healthy lifestyle,” said West Hollywood Mayor Lindsey Horvath. “This process empowers the community to locate the most convenient stations that make biking accessible and safe for all.”

The city’s goal is to gather feedback about where bikes are most needed, where users will want to go, and what would encourage prospective riders to use a bike rather than a car to reach destinations within the city. The city is also inviting community members to suggest sites at key destinations outside of West Hollywood’s boundaries to be considered for a future expansion of the program.
The bike share online tool also features detailed information about the upcoming program and it includes a section called “Meet the Bike” for visitors to get acquainted with the unique features of the bicycles. The bike share program will feature 150 “smart bikes” manufactured by Social Bicycles, which will use wireless technology to let riders use a smartphone app to reserve bikes, pay for membership, and track and share ride data with friends in online social networks. The bicycles will feature light-emitting diode (LED) headlights and taillights, and cargo baskets.

To tackle steep climbs to Sunset Strip, the bicycles will feature eight gears. As “smart bikes,” all of the technology is located on the bikes, so they can also be locked to any public bike rack, increasing user flexibility and convenience.

Users will be able to find bike share bicycles near transit stops, businesses, and other major destinations within the city. The system also will be linked to the Westside Regional Bike Share program, which includes the cities of Santa Monica and Beverly Hills, and will provide combined access to more than 1,000 bikes.

The bike share program will be operated by CycleHop,LLC, which plans and operates bike share programs throughout North America. Currently, the city has 3.5 miles of bike lanes and sharrows. West Hollywood is actively expanding its bicycle network with the completion of its Pedestrian and Bicycle Mobility Plan update.

A hub at both West Hollywood, Plummer Park and Hart Park – with intermediate drop off zones within a block of major intersections.

I know where I don’t want to find a shared bike in Weho……on the sidewalk.

Now we should have a FREE PUBLIC Shared Bike system (including Safety gear) that can be easily financed by ticketing the completely obnoxious drivers of SUVs. Best of all it will save me the trouble I have to go to in stealing one out of a rich person’s yard when I need one! 🙂

i’d love to find the stolen bike i once owned, back in my yard. wish upon a star ! 🙂

Such a great idea! I’m excited to see more people utilize bikes in weho. Only thing is, I don’t see anything about helmets being a part of the bike rentals. Proper safety gear is crucial in a city where drivers think they own the road.