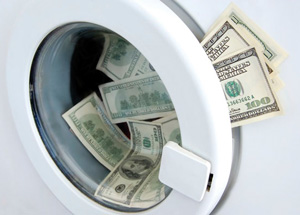 Five of 10 defendants charged in an alleged international money laundering and identity theft scheme, one a resident of West Hollywood, made their first appearance in a federal Santa Ana courtroom today.

The five defendants — arrested late Wednesday — are accused in a scheme prosecutors say involved $14 million in phony tax refunds. The IRS alleges that about 7,000 phony tax returns were filed in the scheme that sought about $38 million in refunds, according to Thom Mrozek of the U.S. Attorney’s Office. The agency issued about $14 million of the requested refunds, which were laundered through various bank accounts, Mrozek said.

The refunds were obtained through stolen identities, which is a growing problem, prosecutors said. The defendants used bogus foreign passports to steal the identities and open bank accounts and mailbox addresses, Mrozek said. The mailboxes and bank accounts were opened in various cities throughout the Southland, including Newport Beach, Cypress and La Habra.

The others still sought by authorities are Mkhitar Mkrtchyan, 43, of Sylmar; Karen Pgosian, 45, of Sun Valley; Konstantin Galstyan, 23, of Sylmar, and an unidentified woman and man.

The False Tax Return Scam has been going on for some time now going back strongly to at least 2008 and is far more common in republican parts of South Florida. Con artists have been filing bogus tax returns and collecting $millions. It’s surprising to find out just how far the scam has gone and why the IRS hasn’t been able to stop it until very recently. The problem has to do with the numerous tax preparation sites on line that make filing for bogus electronic tax refunds one of the easiest crimes to commit! Requiring nothing more than a… Read more »

We may all have to turn to money laundering as a means to afford living in this out-of-control town.