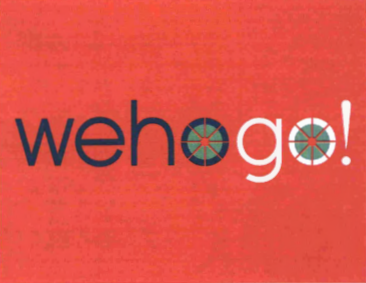 WeHoGo is a no go.

City Councilmember John D’Amico raised the initial question about the brand name, saying it sounded very general and didn’t make clear that it was bicycle focused. Councilmember John Heillman urged the Council to go ahead and approved the “wehogo” name so as not to delay implementation of the program, which likely will be launched this Summer. But the other council members agreed to D’Amico’s request that they delay approval for two weeks to see if city staffers and Symblaze can do better.

A city staff report notes that the price schedule isn’t intended to be competitive with that of local bike rental companies. Instead it is somewhat more expensive to encourage people to use the bikes for short rides rather than keeping them all day. The city will look to add options in the future for employers who want to offer bike share as part of employee commuter benefits .

Talk about “making way too much of a muchness”…just call the damn program PEDAL PALS…and move on with your apparently remarkably empty lives.

Really! Thus firm that recommended this Brand should have done a google search of the goweho brand. Or a trademark search with the US Trademark office. GO Weho is a trademark property of Regina Paris.
Linkedin Profile http://www.linkedin.com/reginaparisceogoweho
Trademark serial number 86939923
I will be sure to notify city council and city attorney.
Regina Paris
CEO/GOWEHO
Goweho.com

By simply adding the silhouette of a bike in the graphics would send the message…..short and sweet.

The Logo just needs some refining. The ‘O’ in WEHOGO, looks more like a pizza than a bike wheel. Spokes or the attempt at spokes need redesign. Spokes crisscross, thus giving the logo the feel of bike wheels.

I saw this service in San Diego and wondered whether it would work in LA. But with the way people drive in this town… no thank you!

Bikesters are also oblivious to the responsibilities of property damage. Recently one was careless about unleashing his bike from a rack causing considerable damage as it fell against my car. Quarter panel repair and repaint necessary on an otherwise nearly flawless car. The guy denied having insurance, or ID gave a bogus name and phone number before scooting off. Unbelievable I caught up w him on the next street extracted about $60. cash under threat of calling the police. Having to call the police for a situation like this seems ridiculous as they would ask “What’s the big deal ?”… Read more »

Use of the word “skate” brings to mind the risk that moronic skateboarders also place pedestrians. Gravel encrusted sidewalks would help rid our neighborhoods of such vermin.

Those “warning” signs featuring bike riders seemingly versus pedestrians are ridiculous, and most certainly do not signify anything even being remotely legal about those who utilize two wheeled transportation being liable if/when they run into someone. Perhaps it’s time for all bike riders to buy insurance. That might slow them down.

Woody McBreairty, thank you. There is absolutely no enforcement & the dangers of cars on roads in West Hollywood are a daily problem & becoming more frequent. I know because my dog Zipper & I take long sidewalk morning walks every single day. I have seen cars narrowly miss dogs, suddenly startling people & causing people to trip at crossings, block pedestrian traffic in crosswalks, dangerously speeding in & out & around pedestrians, confrontations between pedestrians & car drivers, on & on ad infinitum. It’s most unfortunate that pedestrians don’t have a chance against speeding cars & nothing is ever… Read more »

Jimmy, that is definitely better than the proposed name.

I also agree that $7 an hour is a little steep. I don’t know how successful this program will be at that rate. Its cheaper to take the bus.

webike -weho…….the colors in the campaign are burger king/mcdonalds colors. they are studied and used to make patrons feel uncomfortable mentally so they will eat and leave quickly. i dont like this campaign,