West Hollywood’s City Council members aren’t likely to turn off, tune out and power down at public meetings anytime soon. The Council last night effectively rejected a proposal by Mayor Lauren Meister that would have barred elected or appointed city officials from using cell phones or laptops or tablets while conducting a public meeting.

As a compromise, the Council did ask the city attorney to come back with an ordinance that would bar use of electronic communication devices during official public hearings. 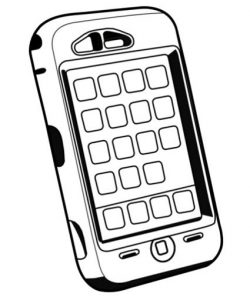 One of the most vocal opponents of Meister’s measure was Councilmember John Duran, who was accused at a March meeting by Councilmember John D’Amico of “trolling on Grindr for men.” Grindr is a mobile phone app that gay men use mostly to find sexual partners. It is accessible only by cell phones or tablets. Duran denied the allegation.

It was D’Amico’s accusation that apparently prompted Meister’s proposal. Residents also have expressed concern that council members are looking at their cell phones while they are speaking to the council and that council members might be getting instructions during debates on important issues from lobbyists and people who have funded their election campaigns.

“I think that the item is too broad and either needs to be restricted or voted down,” Duran said. He said he uses his cell phone during council meetings to look at email messages and past council agendas and take notes. “I also occasionally use Wikipedia,” Duran said. Duran received a text message during last night’s meeting about a search for three armed robbers in West Hollywood. He used his cell phone to send out a message warning his contacts that Sheriff’s deputies were looking for the robbers and to warn them.

Councilmember John Heilman also opposed the proposal. “I do believe it is possible to pay attention even while you are checking on your phone,” Heilman said. “I don’t think there’s any real need for it … I have sat through lot of public meetings. Every council member — I have never seen one who wasn’t paying attention.”

Councilmember Lindsey Horvath said she supported the intent of Meister’s proposal but wasn’t sure she agreed with all of it. “From what I have heard, it’s not so much the use of the device but what it is we’re doing with it,” she said.

Councilmember D’Amico supported Meister’s proposal, saying that getting off digital devices would “center” council members in the room where they are meeting. “We wouldn’t be in other places on the internet. We would just be here for the public in this room.”

I agree…at a meeting it looks less than professional. However, it’s 2016 & that’s the way we roll.Simply cannot ban cell phones/text(s) at meetings.

The point is to limit ex parte communications during a City Council meeting; while the cell phone ban may not be air tight it is going in the right direction. I was not surprised that the two attorneys on the City Council came up will all sorts of specious reasons not approve this measure. While trolling on sex sites is more of a distraction than a problem; the issue is lobbyists, staff members or members of the community privately communicating during the meeting with Council members during Council deliberations, which are supposed to be a public process. But historically the… Read more »

It might be pointed out the the ban does not have to apply to the city manager or city attorney as they are not publicly elected. Lauren stated clearly.. ‘her phone is in her handbag’ and she is the one conducting the meeting and in need of the most up to date info. But she comes prepared. She doesn’t need a phone to look things up. Wouldn’t it be nice if others would voluntarily follow suit and not abuse their cellphones and cellphone use on various apps that would cause an item like this to be brought forward. PS, I… Read more »

No one needed a text to know what was happening on Monday night. The helicopters flying overhead broadcasting to stay inside and lock your doors could be heard even in Beverly Hills.

Truth is stranger than fiction. Soon after the debate and technology won; text messages came in alerting council of a very dangerous public safety event as it unfolded in real time. This was able to be relayed to the public instantly. Thanks to a text. Public Safety went into action as did our Sheriffs Dept. Since the criminal activity was unfolding at the close of the council meeting, the City Manager was able to arrange for safe escorts to (ironically) the councilmember who’s item wanted to ban technology. Technology is here to stay and more to come, availing our council… Read more »

While I think Lauren’s intentions were admirable, legislation is not always he best answer for every problem. As uncomfortable as the whole Grindr / deputy–deputy–deputy / spy memo / lawsuit / union / settlement fiasco has been — from just about wherever one might stand — we shouldn’t forget that this all erupted in the course of a highly competitive double-date election battle, which despite its utter toxicity managed to deliver four dedicated and talented City Council members. While the two remaining lawsuits will likely be settled on similar terms as Ian’s case, as a community and a municipality we… Read more »

Does someone have a list of the dates all our current council members will be “termed out?”

Each city council member has a computer in front of them with access to the internet. So some of the arguments made to ‘look up info’ on their cells phone are not an accurate statement. Unfortunately the Duran stuff has caused other council members to offer new ideas to restore public trust and that should be commended.

Whew! Thank heavens, Duran will still be able to troll for sex during meetings!! And don’t think he won’t.

Council members could lead by example. If Lauren announces at the beginning of the meeting that she’s turning her phone off for the duration, maybe others will be shamed into doing it. For example, when John D’Amico began disclosing campaign contributions at the beginning of a public hearing regarding a contract or building permit, I’ve seen others doing the same. However, it is a handy tool when you need to check a fact with a Google search or your assistant needs to remind you of something during a hearing or an emergency arises. The one thing you shouldn’t be doing… Read more »