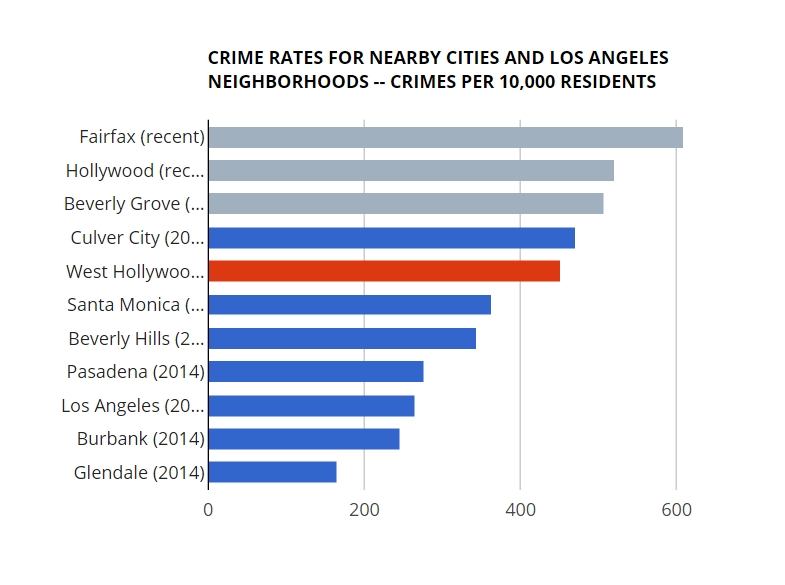 West Hollywood’s crime rate was higher than that of Beverly Hills and Santa Monica, but lower than Culver City’s (except for violent crime). That’s according to a new analysis by WeHo by the Numbers of data from the FBI and the Los Angeles Times. It expands on their analysis from April that focused on areas to the east and southeast.

West Hollywood’s 2014 crime rate was 452 per 10,000 residents. The crime rate was calculated by dividing the number of reported homicides, rapes, robberies, aggravated assaults, burglaries, thefts, motor vehicle thefts and arsons by the city’s population. It does not take into account other factors, such as the mix of crimes or the number of non-resident workers and visitors in the city.

West Hollywood did not have the highest crime rate in the area. Its rate was 4% lower than that of Culver City, which had 471 per 10,000 residents in 2014. It was also 10% to 25% lower than three nearby areas of Los Angeles — Beverly Grove, Hollywood and Fairfax — based on their recent crime rates.

When it comes to violent crime, West Hollywood had 75 incidents per 10,000 residents in 2014. That was about 75% above Culver City’s rate. It was double the violent crime rate in Santa Monica and more than double the rate in Beverly Hills. It was lower than recent rates in the Hollywood and Fairfax neighborhoods.

For more information, please see the WeHo by the Numbers article Part 2: How does West Hollywood’s crime rate compare?

I’m not saying that this is a serious crime but obviously we have a problem with safety here. I live on Palm Avenue. Someone told me that all day long there has been a homeless man in the driveway next door to mine washing and tooling around with a friend of mine’s car who is currently out of town. He’s using a hose and tools on the car. I told him to stop and he hasn’t. I called the police and reported it at 2:19pm when I first spotted this. When I called the sheriff I gave them a description… Read more »

I must say I have witnessed and experienced Serious Crimes and the local weho Officer refused to take a report of a home theft in excess of $1,500 and then again when an attemted forced entry by ladder to a second floor bedroom window (That is a Felony) and the foiled home invader (all on security video the WeHo Sheriff refused to even consider looking at) and having stopped the attempted forced entry by pushing the ladder away from the second floor bedroom window while on the phone with 911) .. First said the guy “detained” sitting on the sidewalk… Read more »

“Crime happens everywhere. If you are concerned, maybe you should move. What do you want us to do about it? File the report on line.” That is verbatim what my neighbor was told by an officer at the West Hollywood Sherrif Department when she tried to file a report for theft from her vehicle and garage a few weeks ago. Yes…Crime is everywhere. But that artitude from the sherrif department isn’t going to help.